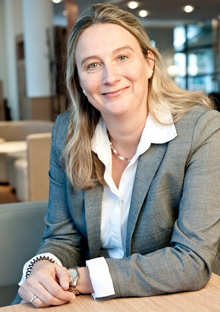 Frankfurt am Main, 9 January 2019 – Sigrid Köntopp has taken over the position of Senior Director Operations IntercityHotel with effect from the start of the year. She succeeds Robert Boller, who will remain with Deutsche Hospitality as Managing Director of MAXX Hotel GmbH.

In her new capacity as Senior Director Operations at IntercityHotel GmbH, Sigrid Köntopp will be based at Corporate Office in Frankfurt, from where she will act as an interface between executive management and the hotels in respect of all operational processes. She will share the role with Thomas Knabner, who has been with the company since 1992. Both will report to Joachim Marusczyk, founding Managing Director of IntercityHotel GmbH.

Ms. Köntopp comes from the AccorHotels Group, where she held a range of management functions at various ibis Hotels over a period of almost 30 years. These have included General Manager positions in Cologne and Frankfurt. For the past ten years, she has been Vice President Operations most recently for the ibis family South and West Germany.

“We are delighted to have acquired the services of Sigrid Köntopp,” said Joachim Marusczyk. She possesses three decades of experience in the sector, both at hotel and group level. She is able to offer comprehensive expertise in all operational matters and will make a major contribution towards enhancing our processes still further. We would also like to thank Robert Boller for his great work over recent years. We are pleased that he will be involved in positioning the MAXX by Steigenberger brand in future.”

IntercityHotel is a Deutsche Hospitality brand which stands for modern upper mid-range urban hotels. IntercityHotels are located within easy walking distance of airports or railway stations. Guests also benefit from a “FreeCityTicket” scheme, which enables them to use local public transport free of charge. The IntercityHotels portfolio includes over 40 hotels in Germany, Austria, the Netherlands, Oman and China, and 20 further hotels are currently at the development stage. Deutsche Hospitality operates three further brands. Steigenberger Hotels and Resorts boasts 60 hotels housed in historic traditional buildings and lively city residences and also offers health and beauty oases set at the very heart of nature. MAXX by Steigenberger is a new and charismatic concept which places the focus on the essential in accordance with its motto “MAXXimize your stay”, whilst Jaz in the City branded hotels reflect metropolitan lifestyle and draw upon the local music and cultural scene.