“She Has a Deal” Announces Pitch Competition Winning Teams

“She Has a Deal” Announces Pitch Competition Winning Teams 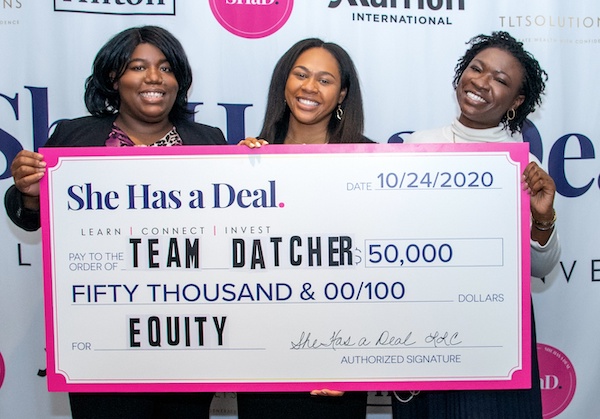 McLEAN, Va., October 30, 2020—Officials of “She Has a Deal,” an annual hotel investment pitch competition for early-career women, today announced the winners of its event held Saturday.

Over the last year, participants completed more than 12 hours of intensive hotel investment education to learn how to source, evaluate and raise capital for a real hotel deal.

Out of a field of 17 teams, five were selected at a virtual preliminary round to move forward to the finals, where they pitched live to a judging panel of top-level hotel business executives, entrepreneurs and investors.  Held at Hilton’s Innovation Gallery at the Hilton McLean, Virginia, the event also was broadcast on the “She Has a Deal” website.

Three prizes were awarded.  The Viewers’ Choice award, voted on by the livestream audience, was given to Fernweh Partners, comprised of Meaghan Carfrey, Nikki Gonzales and Viviana Wilkins from San Diego State University.  Winners received $200 Visa gift cards.  Fernweh Partners also received second place from the judges, with an additional cash award of $5,000 for the team.

The grand prize-winning team was Datcher, made up of Cornell University Baker Program in Real Estate graduates Joanne Angbazo, Kristen Collins and Lera Covington.  Datcher was awarded $50,000 in deal equity, which makes them hotel owners.

“Hands down, the most valuable aspect of the SHaD competition has been the meaningful personal connections that I have made along the way,” said Lera Covington, Datcher’s team captain.  “From the industry luminaries that led our MasterClasses to the SHaD coaches-turned-mentors and competitors-turned-colleagues, SHaD has provided me with so many tremendous relationships that will last a lifetime.  I can’t wait to do deals with this network in the future!”

“The SHaD investment roadmap allowed our team to develop a clear strategy for our deal early in the competition,” said Datcher member Kristen Collins.  “The MasterClasses and discussions with industry leaders empowered us to take what we learned in Cornell’s Baker Program in Real Estate and make it applicable to our deal.”

Joanne Angbazo added, “It’s been such an honor and privilege to be part of this experience, but I tell you, we put in the work! When surrounded by such inspiring participants, we had a surplus of motivation to push through those long days. We worked hard and wanted to deliver excellence in every way, so to be announced winner is both humbling and empowering.”

Datcher pitched an 80-room adaptive reuse project in Detroit, Mich.  The boutique hotel would be built from an old bank building, with health and wellness services offering inside the bank’s vaults.

“It was so rewarding to see our vision come to life.  My goal from the start has been to increase the number of women hotel owners, and there are now three more women on the list,” said Tracy Prigmore of TLTsolutions and founder of the “She Has a Deal” competition.  “All of our pitchers were outstanding, so Joanne, Kristen and Lera should feel very proud.”

Applications for the 2021 pitch competition are being accepted until November 25 at www.shehasadeal.com.

About “She Has a Deal”

“She Has a Deal” (SHaD) was founded to create pathways to hotel ownership and development for women through education, networking and mentorship.  SHaD's signature program is an annual hotel investment pitch competition for early-career women.  Accepted pitching teams participate in a multi-module education series that walks them through the process of sourcing, evaluating, financing and pitching a hotel investment deal.  “She Has a Deal” provides a financial model to assist the competitors in their search for the best hotel deal.  It's not just a deal on paper: the pitching teams find, evaluate and propose real hotel deals, with the chance to win $50,000 in deal equity.  “She Has a Deal” also offers educational opportunities for all kinds of aspiring hotel investors through a MasterClass series and has launched an investment fund to support women led hotel development projects.