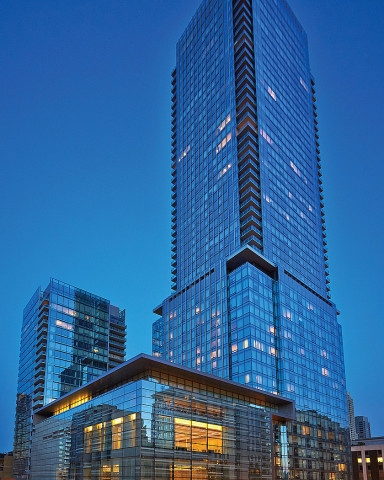 TORONTO–(October 3, 2016)–Shahid Khan, the founder of Flex-N-Gate Group and CEO of the Jacksonville Jaguars of the National Football League and the historic London-based Fulham Football Club, announces that he has today arranged through various family holdings the purchase of a 100 percent ownership of Four Seasons Hotel Toronto from an affiliate of Kingdom Holding Company (“KHC”).

The sale price of C$225 million was confirmed today upon closing. The purchase has been approved by all appropriate regulatory bodies.

Up until this sale transaction, Four Seasons Hotel Toronto was wholly owned by Kingdom Holding Company (KHC). Based in Riyadh, Saudi Arabia, KHC is a publicly listed company on the Saudi Stock Exchange, founded and chaired by His Royal Highness Prince Alwaleed Bin Talal Bin Abdulaziz Alsaud, one of the world’s leading investors.

“My admiration and respect for the Four Seasons brand is deep and immense, and the importance and prestige associated with Four Seasons Hotel Toronto is something that I fully appreciate and, in fact, inspired me to explore whether this dream had the potential of becoming a reality,” Khan said. “The greatest and most global brands and companies all have a home, and Toronto is home to the iconic Four Seasons brand. By taking ownership of this property, I intend to treat it as the treasure that it is, and to do whatever it takes to maintain and build upon its leadership position in the luxury hotel segment in Canada.”

Khan added, “I am also honored that His Royal Highness Prince Alwaleed Bin Talal has put his trust in me to accept the responsibility and privilege of caring for Four Seasons Hotel Toronto. HRH Prince Alwaleed is a fascinating man whose commitment to people and community throughout the world truly transcends his brilliance in business. Given his ownership stake in the management company Four Seasons Hotels and Resorts, I am happy that HRH Prince Alwaleed continues to play an integral role in the company’s global presence. I look forward to working in close partnership with Four Seasons to ensure a smooth ownership transition and a successful long-term relationship.”

“Without Toronto, you cannot tell the story of the greatest cities in the world,” Khan said. “I fell in love with Toronto many years ago through my many business trips to Canada and unquestionably feel a closer kinship today that will last forever. Four Seasons Hotel Toronto is at the heart of what makes Toronto a world-class destination and, in fact, Four Seasons hotels, resorts and residences serve as the centerpiece of their communities no matter where you go in the world. I will be tireless in my efforts to celebrate Toronto and Four Seasons Hotel Toronto wherever I go and in everything I do.”

A naturalized U.S. citizen, Shahid Khan arrived from Pakistan in 1967 at age 16 to study at the University of Illinois. With a B.S. in industrial engineering in 1971, he became Flex-N-Gate’s engineering manager. In 1978, Khan left and with $13,000 in savings and $50,000 from the Small Business Loan Corporation, he created the start-up Bumper Works, which revolutionized the industry through an innovative one-piece bumper design that remains the industry standard.

Khan eventually returned to buy Flex-N-Gate, which was ranked in 2015 by Automotive News as the 10th-largest original equipment supplier in North America and the 38th largest supplier in the world. Flex-N-Gate employs more than 18,750 people at 55 manufacturing facilities and nine product development and engineering facilities.

Khan’s dream of owning an NFL team became reality on December 14, 2011, in a unanimous 32-0 vote by NFL owners in support of his purchase of the Jacksonville Jaguars. The first team owner of minority ethnicity in NFL history, Khan serves on several influential NFL committees and was a charter board member of the NFL Foundation.

In 2013, Khan complemented his sports holdings with the purchase of Fulham Football Club, which is currently in the top half of the table in the Sky Bet Championship.