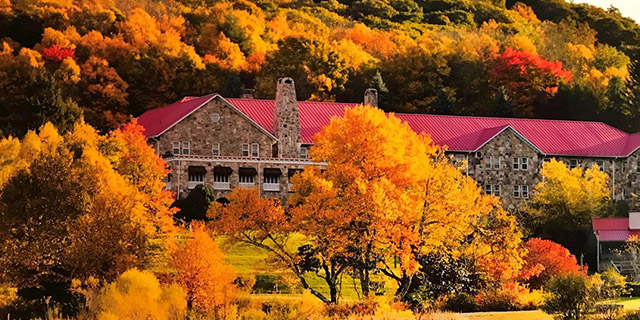 PEMBROKE, VA (Nov 7, 2018)– It endured more than a decade of neglect and an empty, bone-dry lake – a hopeless, rundown place that no one thought could ever succeed again. But when old-fashioned hospitality, tenacious teamwork and a refocus on the “have’s” rather than the “have-not’s” took over, there was no stopping this once forgotten treasure where the cult classic Dirty Dancing was filmed.

Now, an extensive seven-year grassroots effort has saved Mountain Lake Lodge and transformed it into a thriving, award-winning lodging destination.

Said Betty Massey, Executive Director of the Mary Moody Northen Endowment, the private Galveston, Texas-based foundation that owns Mountain Lake Lodge, “We stand in awe of our ‘Miracle on the Mountain.’ It’s a real comeback story where Heidi Stone and her hard working team, along with the Mountain Lake Board of Directors, have kept Mountain Lake and the Dirty Dancing spirit alive.”

The turnaround includes a complete overhaul inside and out but it wasn’t big money that saved Mountain Lake Lodge, says Stone. “To those hotels that are struggling, my advice is to focus on your assets and what you have, not what you don’t. You can spend many millions on a renovation but listening to your customer base is the key.”

Initial plans, for example, called to entirely eliminate the Lodge’s connection to Dirty Dancing. Management reasoned that since the lake – where key scenes in the movie were shot – had dried up, the whole Dirty Dancing concept had died with it. But that was not the case and when they cultivated the film connection, everything changed. One by one, guests became loyal customers, and fans became loyal followers.

“So many people come here to see the Kellerman’s Mountain House depicted in the movie,” adds Stone. “It’s a great story and when we decided to tell it and take the focus off a lake with no water and on what our customers wanted, that’s what brought us to where we are today.”

Mountain Lake Lodge has an illustrious past dating back to 1851 when stagecoach travelers were its primary guests. By the 1920’s, it was known for great music, dancing and entertainment. In 1930, William Lewis Moody purchased the property and in 1936, built the sandstone Lodge that remains today. Then in 1987, when the original Dirty Dancing was filmed, Mountain Lake provided the majority of the backdrop. But by 2000, the Lodge had fallen into serious neglect and for several years experienced significant losses. A major overhaul was sorely needed.

Today, Mountain Lake’s renewal successfully mixes modern amenities with nostalgia, and myriad movie reminders are scattered around the resort. Visitors are drawn to special themed ‘Weekends at Kellermans” where they are immersed in activities inspired by the movie and its characters – from guided tours of film locations, to dance lessons, parties, lawn games, scavenger hunts and screenings of the original film.

Under Stone’s leadership, occupancy, revenues and group business have soared and the resort has seen consistent growth every year since 2013. Last year, during the film's 30thanniversary, Stone chose to drive an already formidable social media presence to increase website traffic and online reservations by way of online contests and regular “Fun Facts” and “Did You Know?” posts addressing its audience’s passion for all things Dirty Dancing. Not only did budget earnings exceed 100 percent – efforts resulted in an increase of more than 21 percent in revenue and 181 percent in website traffic, far surpassing original goals.

According to Board Member Bob Donovan, “Mountain Lake Lodge would not exist today if it weren’t for Heidi Stone. When I first visited in 2011, it was rundown, stale and neglected. The Endowment was considering closing the property, not sure we could save this worn out gem. So we hired a talented hotelier and true visionary whose insight and passion has not only saved Mountain Lake but transformed it into a very successful resort.”

The resort was recently named Hotel of the Year by the Virginia Restaurant, Lodging & Travel Association (VRLTA) which annually recognizes the best among the State’s hospitality and tourism industry. In addition, Heidi Stone has been named Hotelier of the Year.

Said Eric Terry, President of VRLTA, “We are proud to acknowledge the extraordinary people and companies in Virginia’s hospitality and tourism industry. Heidi Stone and her team have brought back Mountain Lake Lodge for travelers everywhere to enjoy and made the resort a key contributor to jobs and business in southwestern Virginia.”

Mountain Lake Lodge – which has also earned two Awards for Excellence from TripAdvisor® and numerous Gold Summit Awards from the Public Relations Society of America (PRSA) – is located in Virginia's Blue Ridge Mountains, part of the Appalachian Mountain Range and the center of a 2,600-acre nature preserve protected by Mountain Lake Conservancy, a non-profit organization founded in 1989. It features 96 accommodations including rooms, cottages and mountain homes. For information, visit www.mtnlakelodge.com.