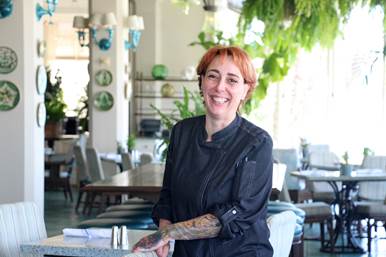 (LOS ANGELES; July 27, 2016)—The quintessential, beachfront Hotel Casa del Mar appoints Gemma Gray as its new executive chef, overseeing menu development, the kitchens of its two on-site restaurants, Catch and Terrazza Lounge, and the banquet department. A native of Salamanca, Spain, Gray is a seasoned chef specializing in seasonal California cuisine, drawing upon influences from her Mediterranean background and utilizing both classic and modern cooking techniques.

“Cooking is all about discovery and sharing that experience with others,” Gemma says. “From learning about new techniques to working with ingredients for the first time, I love the idea of trying something different, and I’m bringing this sense of discovery and excitement to Hotel Casa del Mar’s culinary program.”

As a child, Gray grew up on a farm where her father tended livestock and hunted wild game, while her mother planted seasonal vegetables and used all these ingredients to prepare traditional Spanish dishes like cocido, a hearty meat and vegetable stew cooked over their fireplace. Being raised in this environment, she was instilled at an early age to cook what’s local and freshly available, which is the ethos that Hotel Casa del Mar requires from its chefs, given the fresh bounty of Southern California ingredients at their fingertips.

“Gemma’s international culinary background is an extraordinary asset to the hotel, given our guests visit from all over the world,” said Director of Operations Franck Savoy. “Through her experience working for a variety of hotels and lauded chefs, Gemma knows how to create approachable, yet distinctive dishes that are truly original and representative of Hotel Casa Del Mar’s coastal setting.”

Gray’s impressive résumé includes helming the culinary programs for large hotel groups like the Hyatt brand, and most recently an acting executive chef at the Andaz West Hollywood. She also worked closely with award-winning chefs, such as Jose Andrés at Trés by Jose Andrés at the SLS Hotel and Susan Feniger and Mary Sue Milliken at Santa Monica’s Border Grill.

At the Andaz West Hollywood, she created and oversaw the culinary team for the 239-room boutique hotel, developing new menus for the hotel’s Riot House Restaurant & Bar, as well as catering and in-room dining. Prior to that, she was the executive banquet chef at SLS Hotel in Beverly Hills where she managed the hotel’s banquet department and the restaurant cooks at Trés by José Andrés. As banquet sous chef for the Hyatt Regency Century Plaza in Los Angeles, she managed more than 100,000 square feet of event space, alongside their restaurants Breeze, X Bar, and the in-room dining department, while also developing the menus and recipes for each concept. After earning a vocational training degree in culinary arts/catering in Salamanca in 1996, she moved to Los Angeles in order to expand her knowledge of American cuisine and accepted a job as chef de partie at the Loews Santa Monica Beach Hotel, where she met her husband of 14 years.

It started as a beach club to the well-heeled—a roaring 1920s see-and-be-seen destination by the sea where Hollywood A-listers and well-to-do locals rubbed elbows. These were the glory days of America’s historic seaside resorts and Club Casa del Mar was the grandest of them all. In 1999, brothers Edward and Thomas Slatkin—founders of the boutique hospitality group The Edward Thomas Collection and third generation hoteliers—acquired the landmark property, restoring its former glory and transitioning it into a luxury hotel. The Slatkins brought to life their vision of creating a glamorous beachfront destination that offered breathtaking views of the Pacific Ocean while also providing modern conveniences and activities for its visitors. From its founding, Hotel Casa del Mar has been, and continues to be, committed to offering well-appointed accommodations; warm, welcoming, and lively public spaces; a variety of culinary destinations; and thoughtfully curated and unique guest amenities. The owners are very committed to generously investing into the property to ensure the highest level of guest satisfaction. As hotel brands merge with larger hospitality entities, Hotel Casa del Mar sets itself apart by continuing to provide a family-run, independent-minded destination—a hotel able to adapt to guests’ changing needs and requests seamlessly, while still preserving its rich history.