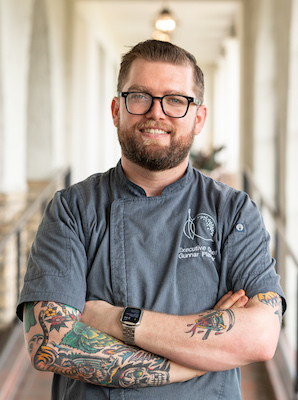 “We are so excited to welcome Chef Gunnar Planter to Mar Monte Hotel,” said Aliya Kritzler, Vice President of Food and Beverage, Luxury and Lifestyle Brands at HEI Hotels & Resorts. “With his impressive background, enthusiasm and passion for culinary excellence, we look forward to elevating our signature restaurant costa Kitchen & Bar to an even higher level, positioning us as the go-to dining destination for discerning travelers and locals alike.”

With over a decade of culinary experience, Planter is dedicated to serving the highest quality food with an emphasis on local ingredients and purveyors. Before joining the team at Mar Monte Hotel, Planter opened Ebullition Gastronomy, a fine dining gastropub in Carlsbad, Calif. specializing in dry aged meats and charcuterie, and served as Executive Chef. Prior to that, he opened Viewpoint, a restaurant in Del Mar, Calif., and developed a menu based on coastal Californian cuisine as the Executive Chef, sourcing his ingredients from local farmers and fisherman. He previously served as Executive Sous Chef at The Inn at Rancho Santa Fe, and before that worked at several private social clubs, hotels and restaurants where he honed his experience in fine dining and banquets. Planter first began his training in 2006 at French restaurant Mill Fleurs in Rancho Santa Fe, under the mentorship of James Beard Award-winning Chef Martine Woesle, who remains his mentor and friend to this day. He worked there for six years and advanced to Sous Chef, while obtaining his Bachelor’s in Culinary Science from the Art Institute of San Diego.

Located across from East Beach and just minutes from downtown Santa Barbara, Mar Monte Hotel, part of The Unbound Collection by Hyatt brand, is a gateway to the American Riviera. The new 200-room boutique luxury lifestyle hotel evokes the spirit of Santa Barbara through classic Spanish-influenced design and thoughtful amenities; two top-tier restaurants, costa and Café Lido; a pool with oceanfront views; dynamic social spaces for weddings and special events; and an authentic emphasis on wellness, community and hospitality. With deep local roots, Mar Monte Hotel embodies the Santa Barbara lifestyle offering guests unprecedented access to some of the city’s best dining, shopping and attractions. For additional information or reservations, visit www.marmontehotel.com or call (805) 882-1234.

About The Unbound Collection by Hyatt

More than a compilation of independent, one-of-a-kind hotels, The Unbound Collection by Hyatt brand is a thoughtful curation of stories worth collecting. In markets from Barcelona to Budapest, these modern marvels, historic gems and revitalizing retreats provide thought-provoking environments that inspire collectible moments for guests seeking a sophisticated yet unscripted experience when they travel. For a full list of hotels in the collection, visit unboundcollection.hyatt.com.

HEI Hotels & Resorts, headquartered in Norwalk, Conn., is a leading hospitality investment and management company that owns and/or operates 82 premium select-service, full-service, upper upscale and luxury independent or branded hotels and resorts throughout the United States with annual combined revenues in excess of $2.2 billion.  HEI’s branding partners include Marriott, Hilton, Hyatt, IHG and Accor. Taking a holistic approach to creating value for its investors and employees, HEI sets the highest standards across all aspects of hotel management and operation and focuses on central principles of excellence and continuous improvement. HEI prides itself on some of the highest employee satisfaction scores in the hospitality industry, fuels local economic prosperity by investing in communities and is committed to environmental stewardship and sustainability. To learn more about HEI, please visit www.heihotels.com.