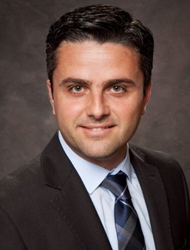 Denver, CO (March 20, 2017) – Sage Hospitality is pleased to announce it has promoted Mustafa Menekse to the position of Area Director of Sales overseeing three independent downtown Denver hotels – The Crawford Hotel, The Oxford Hotel and The Maven Hotel, a vibrant new hotel concept opening next month.

Originally from Turkey, Menekse worked in Information Technology after graduating from college. He moved to the United States in 2003 and began his hospitality career at the Little America Hotel & Resort in Cheyenne, Wyoming, becoming the Director of Sales & Catering in 2010. Menekse joined Sage Hospitality in 2014 as the Director of Sales & Marketing at the Holiday Inn Denver East – Stapleton.

“Mustafa has fantastic hospitality experience and is excited to be leading the sales team at these three independent properties, which each have their own distinct personality,” said Fred Kleisner, Regional Vice President of Operations for the Premier & Lifestyle Division at Sage Hospitality. “It’s the perfect time with The Maven opening next month and the start of the busy summer travel season here in downtown Denver.”

Menekse also serves on the Board of Directors and Marketing Committee for Environmental Learning for Kids, a Denver non-profit that strives to inspire urban youth through science education and outdoor experiences.

Opened in 2014 inside the renovated Denver Union Station, The Crawford offers a Denver hotel experience that is like no other, including 112 luxuriously appointed guest rooms in three styles. Amenities include access to the Oxford Club, Spa & Salon and room service from Denver Union Station restaurants Snooze, an A.M. Eatery and Next Door Union Station. www.thecrawfordhotel.com.

Founded in 1984, Denver-based Sage Hospitality is an industry leading hotel and restaurant management company, real estate investor and hospitality brand developer. Sage is known for outstanding relationships with major hotel brands and creating places that people want to go to, not through, including 10 unique restaurant concepts by Sage Restaurant Group and independent luxury properties by Sage Hotels.  To learn more about Sage, visit www.sagehospitality.com.