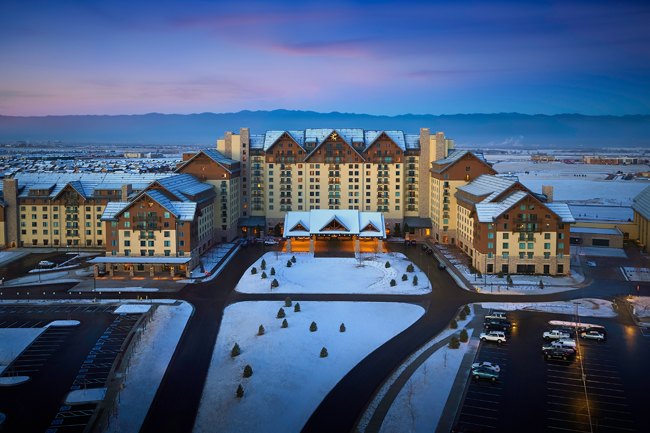 Planned Expansion to Add 317 Guest Rooms, or More Than 20 Percent, to Available Capacity

Colin Reed, Chairman and Chief Executive Officer of the Company, said, “The initial performance at Gaylord Rockies has exceeded our expectations for a property in its first year of operations, and feedback from both group and leisure customers has been tremendous. These early results, combined with the demand we are experiencing as large group supply remains constrained nationwide, reinforce our belief that this is the right time to increase the capacity of this hotel.”

Ira Mitzner, President and Chief Executive Officer of RIDA Development Corp., said, “We take great pride in Gaylord Rockies creating a best-in-class large meeting destination for the state of Colorado. To date, nearly 80 percent of the groups at Gaylord Rockies had never met in Colorado before. We are truly growing the pie for this state.”

Reed added, “We value the strong partnership with RIDA Development Corp. and the city of Aurora, and we are pleased to see our shared vision for Gaylord Rockies continue to take shape. Similar to recent projects at Gaylord Texan and Gaylord Palms, this expansion will allow us to accommodate the additional demand for this property in a way that seamlessly integrates into the existing hotel infrastructure.”

“Since the very beginning of this project we have said that the Gaylord Rockies would be an incredible economic development catalyst for the City of Aurora, Adams County and the State of Colorado,” said Wendy Mitchell, President and CEO of the Aurora Economic Development Council. “The quick timing of an expansion further proves that this has come to fruition and means even more positive impact for the region as we see significant development being catalyzed in the surrounding area. We appreciate the continued leadership and forward-thinking approach of all the stakeholders involved and look forward to the Gaylord Rockies delivering even more value to our community.”

Aurora Mayor Mike Coffman added, “The Gaylord Rockies is one of Aurora’s most significant accomplishments to date and a major driver in our growing economy. The project has put Aurora on the map and I’m proud to see so many new visitors coming here to experience all that our community has to offer. When we look at the economic development success story here, it’s clear that it is a win-win for everyone involved especially for our residents who now have the opportunity of more than 1,500 quality jobs and counting that were created through this deal. RIDA Development Corp., the Company, the City of Aurora, Adams County, and the Aurora Economic Development Council, and all others involved came together to make the Gaylord Rockies a reality and this partnership exemplifies how we like to do business here in Aurora.”

The planned expansion will be financed by the joint venture that owns Gaylord Rockies with additional borrowings from its term loan, which is set to mature in July 2023. The Company owns 62.1 percent of the joint venture.

RIDA Development Corporation is a full-service real estate organization that has created and invested in over $6 Billion of innovative and successful hospitality, residential, office, industrial, and retail developments for more than forty-five years. RIDA Development’s corporate headquarters is in Houston, TX with regional offices in Orlando, FL; Denver, CO and Warsaw, Poland.

This press release contains statements as to the Company’s beliefs and expectations of the outcome of future events that are forward-looking statements as defined in the Private Securities Litigation Reform Act of 1995. You can identify these statements by the fact that they do not relate strictly to historical or current facts. Examples of these statements include, but are not limited to, statements regarding the planned expansion of Gaylord Rockies, the future performance of our business, estimated capital expenditures, construction project costs and completion dates, preliminary operations and other business or operational issues. These forward-looking statements are subject to risks and uncertainties that could cause actual results to differ materially from the statements made. These include the risks and uncertainties associated with construction projects, schedules, budgets, and cost estimates, cash flows, the Company’s ability to borrow funds pursuant to credit agreements, and future business levels. Other factors that could cause business, operating and financial results to differ are described in the filings made from time to time by the Company with the U.S. Securities and Exchange Commission (SEC) and include the risk factors and other risks and uncertainties described in the Company’s Annual Report on Form 10-K for the fiscal year ended December 31, 2018 and its Quarterly Reports on Form 10-Q and subsequent filings. Except as required by law, the Company does not undertake any obligation to release publicly any revisions to forward-looking statements made by it to reflect events or circumstances occurring after the date hereof or the occurrence of unanticipated events.