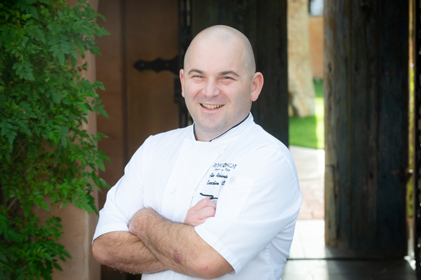 PHOENIX (Jan. 9, 2019) – Royal Palms Resort and Spa in Phoenix, billed as one of the top luxury resorts in Arizona, has welcomed two new additions to the executive team with the appointment of Carlos Morales, general manager, and Alex Robinson, executive chef.

Steeped in nearly 100 years of history, romance and elegance, Royal Palms is part of The Unbound Collection by Hyatt brand and recently underwent a nearly $4 million redesign of the Mediterranean-style hideaway that boasts 119 guest rooms, celebrated legacy restaurant, T. Cook’s and the award-winning Alvadora Spa.

As the newly appointed general manager of the resort, Morales has been part of the Hyatt team for more than 20 years and recently relocated from Hyatt Centric Key West in Florida where he served as the general manager. Prior to Key West, Morales was opening hotel manager of Grand Hyatt Playa Del Carmen and was director of food and beverage at Hyatt Regency Scottsdale Resort and Spa.

Alex Robinson has taken the lead of all culinary operations for the resort, including T. Cook’s, with his new role as executive chef. This will be Chef Robinson’s seventh luxury-brand hotel position throughout his nearly 18-year career. Chef Robinson previously worked for The Ritz-Carlton, Laguna Niguel as the executive sous chef overseeing multiple outlets as well as servicing 80,000 square feet of meeting and event space. Robinson has also worked on the culinary teams at Four Seasons Resort Scottsdale at Troon North, Four Season Resort Jackson Hole, opening team member Four Seasons Hotel Denver, The Ritz-Carlton Chicago and Four Seasons Hotel Boston. Chef Robinson is a graduate from Le Cordon Bleu Scottsdale with an Associate’s Degree in Culinary Arts.

Royal Palms is located on nine breathtaking acres at the foot of the iconic Camelback Mountain. The historic resort combines the graciousness and sophistication of a storied Mediterranean villa with the intimacy and privacy of a secluded retreat, leaving a lasting impression on all who visit. Winding stone paths transport guests past a grove of orange trees, trickling fountains in courtyards, roaring outdoor fireplaces, 100-year-old rustic doorways and hand-painted tiles, and lush gardens filled with magenta bougainvillea, exotic plants and desert flowers. A true destination for lovers, the resort was originally built as a private mansion in 1929 as a grand gesture of love by financier Delos Willard Cooke for his wife Florence. Guests feel right at home while the heritage and heartbeat of the Royal Palms lives on.

About Royal Palms Resort and Spa

About The Unbound Collection by Hyatt

The Unbound Collection by Hyatt is a portfolio of new and existing upper-upscale and luxury properties, ranging from historic urban gems to contemporary trend-setters, boutique properties to resorts. Whether it is a fascinating past, an exclusive location, famous architecture and design, or an award-winning dining experience, the properties in the collection provide guests with “social currency” and allow them the freedom to be unique. Current properties include The Driskill Hotel in Austin, Texas, The Coco Palms Resort in Kauai, Hawaii, which is expected to undergo a revitalization and re-open in spring 2018, The Royal Palms in Phoenix, Arizona, The Confidante in Miami Beach, Florida, the Hotel Du Louvre in Paris, France and Carmelo Resort & Spa in Uruguay. For more information, please visit unboundcollection.hyatt.com. Follow @UnboundxHyatt on Facebook and Instagram.