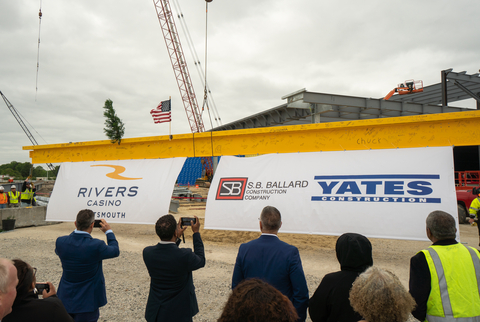 PORTSMOUTH, Va.–Rivers Casino Portsmouth announced the completion today of the steel framing for the new gaming and entertainment complex on Victory Boulevard, which will open in early 2023.

At a Topping-Off Ceremony this morning, a Rivers-yellow steel beam — signed by the Ballard-Yates construction teams, Rivers Casino Portsmouth leadership, and local officials — was raised against the backdrop of celebratory music and hoisted into place. The beam marks a significant construction milestone for the property since its groundbreaking in December 2021.

“We began moving dirt and setting the stage less than a year ago, and we are making great progress,” said Justin Ballard, S.B. Ballard Construction Company. “Despite supply chain disruptions caused by the pandemic, we are still on track to complete this project early 2023.”

After the ceremonial beam was bolted into place, Rush Street Gaming, the developer and operator of Rivers Casino Portsmouth, hosted an appreciation lunch for the entire construction crew.

“Ballard-Yates shares our commitment to high-quality construction and timely delivery of Portsmouth’s state-of-the-art casino, and we thank the entire construction team for their continued hard work and partnership as we make steady progress toward opening,” said Roy Corby, General Manager, Rivers Casino Portsmouth.

This $300 million-plus project will feature a casino, BetRivers Sportsbook, premier restaurants, a live entertainment lounge, hotel, and event center; and will bring 1,300 new permanent jobs and approximately 1,400 construction jobs to the area.

Rivers Casino Portsmouth recently announced a series of five job fairs, one per month over the next five months, beginning May 12 at Tidewater Community College’s Portsmouth Campus. The first job fair will focus on table games and dealer school training. For information about all the upcoming job fairs, visit riverscasinoportsmouth.com.

Rivers Casino Portsmouth is a world-class destination—a $300 million-plus local investment—currently under active construction along Victory Boulevard as part of Portsmouth’s New Entertainment District. The complex will feature a casino, a sportsbook, a hotel, event and conference venues, premier restaurants and more. Rivers Casino will be developed and operated by Rush Street Gaming, one of the fastest-growing casino and entertainment companies in the country. For more information about Rivers Casino Portsmouth, please visit riverscasinoportsmouth.com.