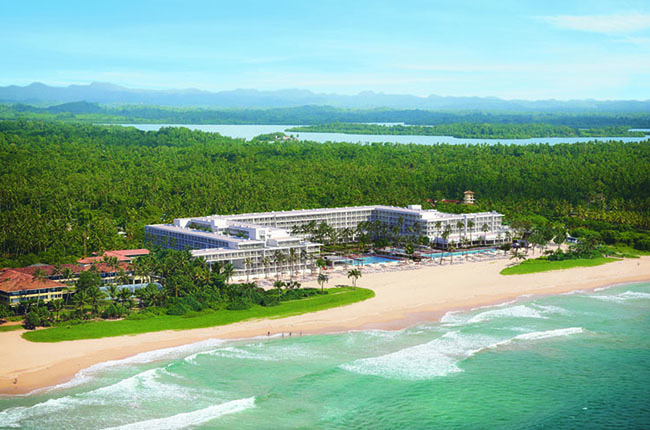 Palma de Mallorca, 4 August 2016 – RIU Hotels & Resorts will celebrate its first inauguration on the Asian continent with a 5-star hotel in Sri Lanka. The Riu Sri Lanka will open its doors tomorrow, August 5th and is a perfect choice for both new and loyal Riu guests who want to discover this exotic destination. The hotel's location in Ahungalla, in the south-east of Sri Lanka, makes it the perfect location from which to explore the island or as a luxurious base, having been designed specifically to offer a relaxed and laid back atmosphere.

The newly-constructed hotel offers a 24 hour all inclusive service and is located overlooking the beach and set against a stunning backdrop. The hotel has three large pools and a children's pool, sunbathing terraces, jacuzzi, gym and the Renova Spa wellness centre which includes a hairdresser and massage service. In addition, the rooms offer many home comforts including a balcony or terrace, 43″ flat screen satellite TV, air conditioning, an electronic safe and a minibar.

Guests will love the gastronomy on offer at Riu Sri Lanka. They will be able to savour Asian specialities at the Kaori restaurant, Italian delicacies at "La Forchetta", or if they want to enjoy a delicious barbecue al fresco by the beach they can elect to eat at the Saute restaurant. The hotel also has two buffet restaurants, "Riti Panna" and "Ceylon", as well as a comprehensive drinks service at its four bars: "Nuwara", "The Purple Lounge", "After Hours" and "Flamingos", the last of which is a pool bar which also features a swim-up bar. The hotel facilities also include the Pacha nightclub where customers can party into the small hours.

After a detailed study of the markets and opportunities, RIU saw this destination as the ideal location from which to launch its operations in Asia. Sri Lanka, known as "the tear drop of India" due to its shape and proximity to the country, is a tourist destination which attracts European guests, as well as customers from India, China and Australia.

With the inauguration of this hotel the first stone will be laid in the company's project to expand throughout the Asian continent which includes the construction of up to three more hotels set to open between 2018 and 2019. The first will be in the Maldives, where two hotels will be inaugurated offering a combined total of 422 rooms, including suites constructed over the water. In addition, the chain plans to open its first hotel in the UAE in Dubai in 2019. The hotel will be located on the Deira Islands and will be unique to the area. With 750 rooms it will be the largest ever constructed and the first to offer a 24 hour all inclusive service.

The international RIU chain was founded in Mallorca by the Riu family in 1953 as a small holiday firm and is still owned by the family's third generation. The company specialises in holiday resorts and over 70% of its establishments offer its acclaimed All Inclusive by RIU service. With the inauguration of its first city hotel in 2010, RIU is expanding its range of products with its own line of city hotels called Riu Plaza. RIU Hotels & Resorts now has more than 100 hotels in 18 countries which welcome over 4 million guests a year and provide jobs for a total of 27,268 employees. RIU is currently the world's 29th ranked chain, one of the Caribbean's most popular, the largest in Spain in terms of revenue and the third largest in number of rooms.