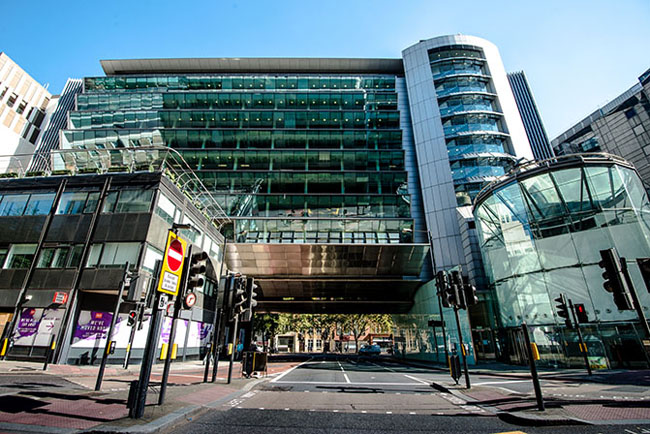 Palma de Mallorca, 19 September 2018 – The hotel chain has just acquired a building in a premium area of the city, close to Victoria Station, which it plans to convert into a 4-star hotel as part of its Riu Plaza urban line.

RIU Hotels & Resorts has bought a building in one of London’s top neighbourhoods where, following a total refurbishment, it will open a hotel in its Riu Plaza urban line. The building is at 1 Neathouse Place, right next to Victoria Station, Westminster Cathedral and Buckingham Palace.

By the end of 2020, the future Riu Plaza hotel in London will become the chain’s first hotel in the United Kingdom, a country that represents a large proportion of RIU’s clientele in Spain and the Caribbean, and where the chain has spent some time seeking the ideal opportunity to expand the city hotel brand. The hotel that RIU is planning will be 4-star, with 350 rooms, and it will be geared mainly towards guests visiting London on sight-seeing holidays.

Luis Riu, CEO of RIU Hotels & Resorts, explains that “location is very important for all our hotels, but for the Riu Plaza line it is essential that we are located very close to the places of cultural and tourist interest and very well-connected. After years spent studying the best offers in the city, we are very pleased to announce this project, for which we estimate an investment of around 250 million euros to cover the purchase of the building and the refurbishment. The location is unbeatable, the building is in excellent condition and I think that in less than two years we will be able to celebrate the opening of our first hotel in London.”

London Victoria Station is the second-busiest station in the UK, after Waterloo, with an annual footfall of more than 75 million passengers using its underground, train and bus terminals. One of the many advantages of the hotel’s location is its direct connection to Gatwick airport in 30 minutes.

The building was originally constructed in the 1960s and it was fully renovated in 1997. The future RIU hotel will keep the structure and the best aspects of the building, and the interior will be completely transformed, with attention to design and comfort as well as the latest developments in energy efficiency and sustainable operations. Some of the rooms will enjoy spectacular views, and the hotel will also have a bar and restaurant, and an open-air terrace, which is not common in central London.

RIU currently has six Riu Plaza hotels worldwide, as well as two undergoing construction: Riu Plaza España and a second in New York. The first city hotel opened its doors in Panama in 2010 and, since then, it has been joined by the Riu Plaza Guadalajara hotel in Mexico, Riu Plaza Miami Beach and Riu Plaza New York Times Square in the USA, Riu Plaza Berlin in Germany and Riu Plaza The Gresham Dublin in Ireland.

The RIU Group has an ambitious expansion plan for the next five years, with a strong commitment to new destinations, especially in Asia, and large global cities where it plans to open Riu Plaza urban hotels. The hotel chain, which goes back more than 65 years, is characterised by its strong commitment to the destinations where it settles, investing in long-term projects that involve the local community through its purchasing, employment and sustainability policies. RIU is also making a big investment in the development and improvement of an increasingly sustainable operation, and all of its projects are guided by respect for the environments and the local culture and environment.

The international RIU chain was founded in Mallorca by the Riu family in 1953 as a small holiday firm and is still owned by the family's third generation. The company specialises in holiday resorts and over 70% of its establishments offer its acclaimed All Inclusive by RIU service. With the inauguration of its first city hotel in 2010, RIU is expanding its range of products with its own line of city hotels called Riu Plaza. RIU Hotels & Resorts now has 92 hotels in 19 countries which welcome over 4 million guests a year and provide jobs for a total of 28,894 employees. RIU is currently the world's 34th ranked chain, one of the Caribbean's most popular, the third largest in Spain in terms of revenue and the fourth largest in number of rooms.