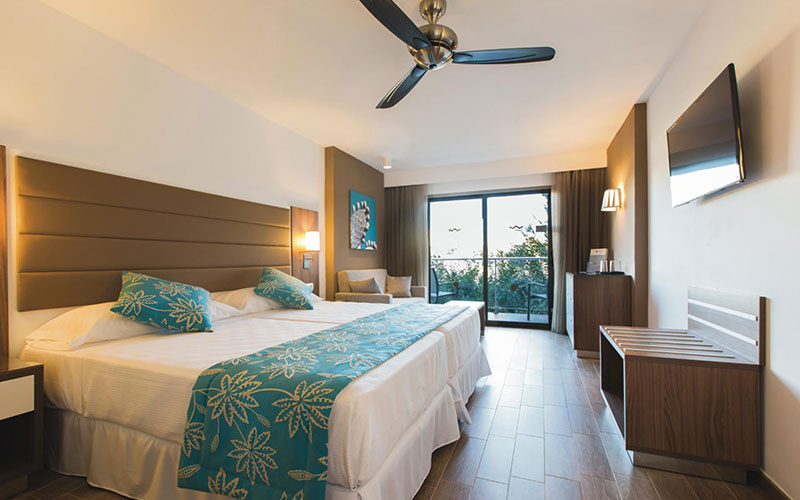 The renovated Riu Bravo hotel opened its doors on March 27th following a complete renovation. After five months of refurbishment work, this hotel in Playa de Palma is welcoming its first guests with a fresh, modern style as well as updated facilities and services. The new Riu Bravo features a facade similar to that of the Hotel Riu San Francisco’s, which after its renovation last year became a pioneer in the redevelopment of this established destination. Straight lines, a white colour palette, glass and metal are the main features of the exterior, while inside, the brightness and the combination of modern and classic elements are the key factors in its new look. The project’s total investment has amounted to 15 million Euros.

The Riu Bravo hotel has added one more floor, using the incentives offered by the Playa de Palma Integrated Redevelopment Plan. Therefore, it has gone from five to six floors and from 345 to 437 rooms. As well as more guest rooms, Riu Bravo now offers a new restaurant specializing in Spanish cuisine and a new pool. Although it continues to be a four-star hotel, the quality of all its services is now greater, especially the accessibility and sustainability throughout.

Opened in 1980, the hotel has kept some elements that define its Mediterranean character, including its wooden structures, the terrace and pool restaurant tiles, the typically Majorcan large blown glass lamps, and the wooden columns in the lobby. All these elements are now combined with more modern materials such as metal and glass, simpler, straight lines, and particularly more light, the main feature of this reformation, thanks to the replacement of walls with large windows in most of the communal areas.

Rooms have been fully refurbished and now they are both larger and brighter thanks to the combination of light colors, like turquoise for bedding and natural colors for the furniture, which has a modern, simple style. The bathrooms are totally new and now feature spacious showers instead of bathtubs, as well as offering natural light thanks to a large translucent glass window.

The Riu Bravo will continue to offer its guests the All-Inclusive service that includes all meals and drinks at its three bars (Lounge Bar, Snack Bar and Aquatic Bar) and three restaurants: the main restaurant with a buffet of international cuisine; the grill restaurant Es Pil.lar’, located on the terrace by the pool; and the new Spanish restaurant Olé, available for evening meals on reservation.

The international RIU chain was founded in Mallorca by the Riu family in 1953 as a small holiday firm and is still owned by the family's third generation. The company specialises in holiday resorts and over 70% of its establishments offer its acclaimed All Inclusive by RIU service. With the inauguration of its first city hotel in 2010, RIU is expanding its range of products with its own line of city hotels called Riu Plaza. RIU Hotels & Resorts now has more than 100 hotels in 19 countries which welcome over 4 million guests a year and provide jobs for a total of 28,813 employees. RIU is currently the world's 30th ranked chain, one of the Caribbean's most popular, the largest in Spain in terms of revenue and the third largest in number of rooms.