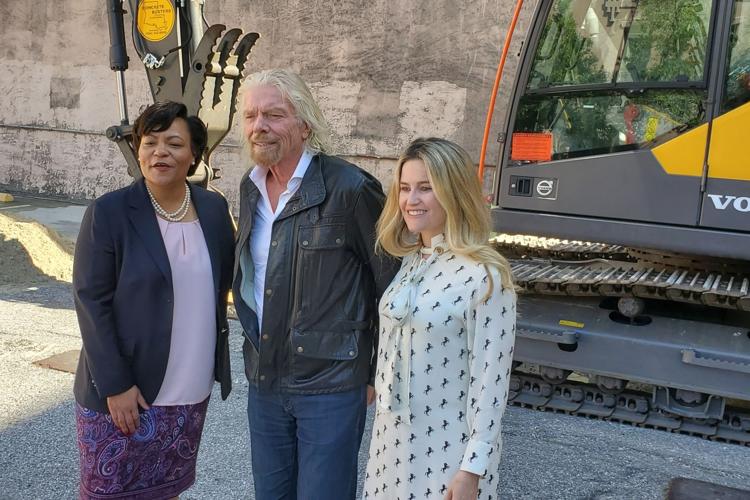 May 23– May 23–Virgin Group's idiosyncratic founder, Richard Branson, shoveled dirt with Mayor LaToya Cantrell Thursday to symbolically mark the start of construction on a new 230-room Virgin Hotel, which is slated to open in 2021.

The $80 million project, going up at 550 Baronne Street, on the corner of Layette Street in the Warehouse District, is a joint venture with Maryland-based Buccini/Pollin Group, which is also in partnership with Virgin Hotels on a project in Nashville, Tennessee. The New Orleans hotel, which will be managed by Virgin Hotels and jointly owned with BPG, will be the seventh Virgin Hotel to open in the U.S. The group has hotels in Chicago and San Franciso and has eight others at various stages of construction or planning.

"I'm very excited to be standing in a parking lot — I've never done that before — and to think when we come back here in a couple years time there's going to be a beautiful, beautiful, beautiful Virgin Hotel here," said Branson, a self-described "tie-loathing adventurer and thrill seeker," at the ceremony.

Branson's Virgin brand has morphed over the last five decades from a music magazine selling advertising out of a phone booth into a sprawling branding conglomerate, covering industries from financial services to space travel, healthcare and cruise ships.

Mayor Cantrell cajoled Branson at the ceremony to start direct Virgin Atlantic Airways flights to New Orleans from the airline's U.K. base. Virgin currently flies directly to 13 U.S. destinations. Branson's Virgin Voyages also is expected to launch next year the first of four cruise ships currently under construction, and the mayor pushed to have that operation add to New Orleans' burgeoning cruise ship traffic.

"Virgin Atlantic maybe one day will fly here, it would be a lovely thing if we could make the figures stack up," Branson vowed. On Virgin Voyages, he said, "each one of those ships will have 3,000 people on board, so we can most likely tie in (and) help promote New Orleans through the cruise company." The first ship, Scarlet Lady, is scheduled to be delivered by its Italian builder later this year and be based out of Miami, Florida.

The hotel project will create 260 construction jobs over the next two years and there will be 230 permanent hotel jobs once it is opened, said Dave Pollin, president of Buccini/Pollin, adding that the hotel is expected to generate over $5.5 million in taxes annually once it's up and running.

Broadmoor Construction of Metairie are the main contractors; New Orleans-based Mathes Brierre, together with CallisonRTKL of Maryland, are the architects; and Logan Killen Interiors of Magazine Street are designing the hotel's interior to "incorporate a Southern residential feel," Virgin Hotels said in a press release.