The 11th edition of the Uniform System of Accounts for the Lodging Industry (USALI) defines resort fees as, “mandatory fees charged at either a flat amount or a percentage of the room rate.”  These fees are frequently intended to cover services such as fitness facilities, spas, pools, local phone calls, Internet access, airport transportation, and golf driving ranges, among other recreational facilities.

Resort fees were initially introduced to allay the complaints of resort guests who felt they were being “nickel-and-dimed” every time they used a resort amenity.  Since then, the practice of charging a resort fee (or similar mandatory charges) has been instituted at other types of hotels, beyond resorts.  It is the charge of a resort fee at non-resort properties that has caught the attention of travelers who question the mandatory fee.

Despite the clamor from travelers, resort fees are still a rare occurrence.  According to the 2018 Lodging Survey published by the AHLA and STR, 6 percent of U.S. hotels charged a resort fee that year.  Of the 6,300 detailed U.S. financial statements processed by CBRE Hotels Research for its annual Trends® in the Hotel Industry survey, only 4.8 percent of them reported earning resort fee revenue in 2018.  When analyzed by property type, 50.8 percent of the resort hotels in the CBRE sample charged a resort fee, versus 2.8 percent for all other hotel types.

Impact on Revenue
At hotels that charged a resort fee in 2018, the associated revenue averaged 3.3 percent of total revenue.  This ratio was slightly higher at resort hotels (3.6%) as compared to non-resort properties (2.8%).

The USALI changed its optional treatment of resort fee revenue between its 10th and 11th edition.  According to the 10th edition, the rooms department was the default destination for recording resort fee revenue, unless hoteliers could fairly allocate the revenue to the departments that provided the services covered by the fee.  To the extent resort fee revenue augmented rooms revenue, the average daily rate (ADR) of a hotel would also be increased to a similar degree.  To provide more equitable benchmarking, the 11th edition of the USALI mandates that all resort fee revenue be recorded as miscellaneous income in the summary operating statement.  Therefore, resort fees no longer influence the ADR of a property.

On a hypothetical basis, what did this change mean to hoteliers?  Without the resort fee revenue, the ADR for the hotels in the CBRE sample was $232.18 during 2018.  If the resort fee revenue was included in rooms revenue during the year, the ADR would have increased by 6 percent to $246.01.  A similar exercise would have boosted the ADR for resort hotels by 7.2 percent, and non-resort hotels by 4.5 percent.

Revenue Growth
According to STR, the pace of RevPAR growth for U.S. hotels has been decelerating since 2014.  In the December 2019 edition of Hotel Horizons®, CBRE forecasts the national average for RevPAR growth to be less than 1 percent per year through 2021.  In reaction to this, hotel owners and operators are looking at all potential sources of revenue beyond the rental of guest rooms.  Resort fees are one feasible revenue source that could make up for the deficiency

From 2015 through 2018, resort fee revenue for the CBRE sample increased at a compound annual growth rate (CAGR) of 10.9 percent.  This exceeds the concurrent CAGR increases for rooms revenue (2.8%) and total hotel revenue (4.3%).  Interestingly, resort fee revenue growth was greater at non-resort properties (12.7%) compared to the resorts in the sample (9.7%).

If implemented properly, resorts fees are a prudent way to recoup expenses during austere times.  However, operators also need to balance the market impact of raising the defacto price to stay at the property. 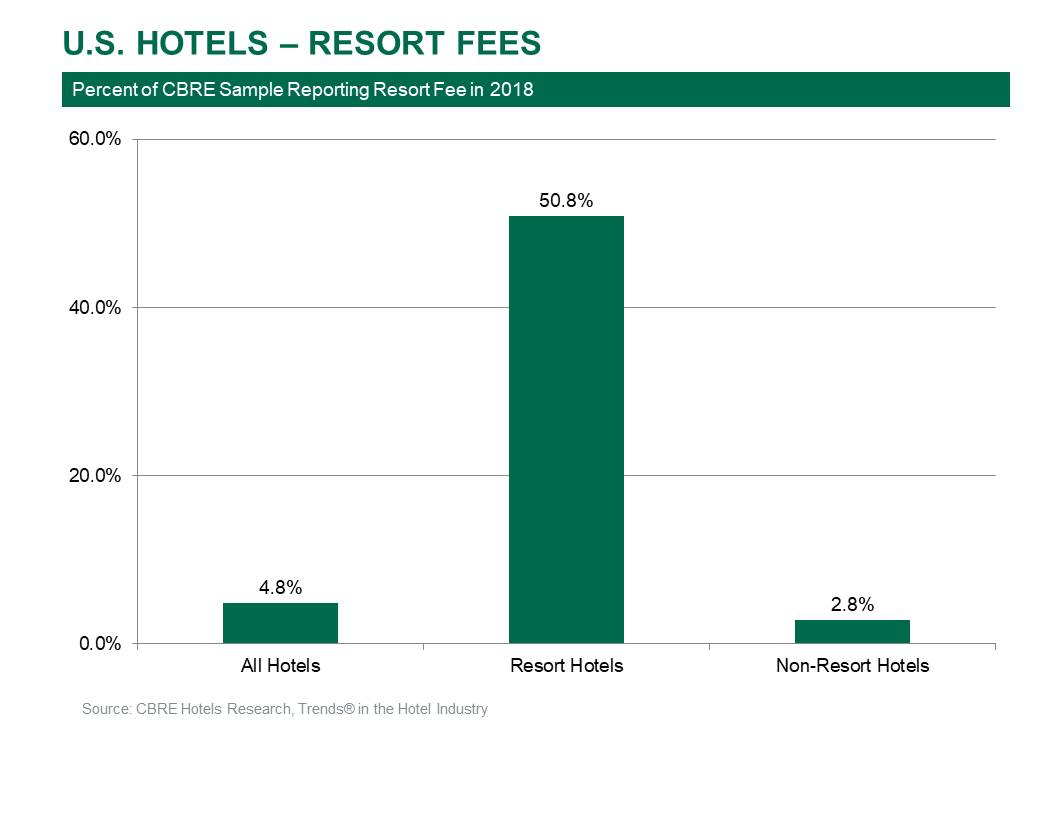 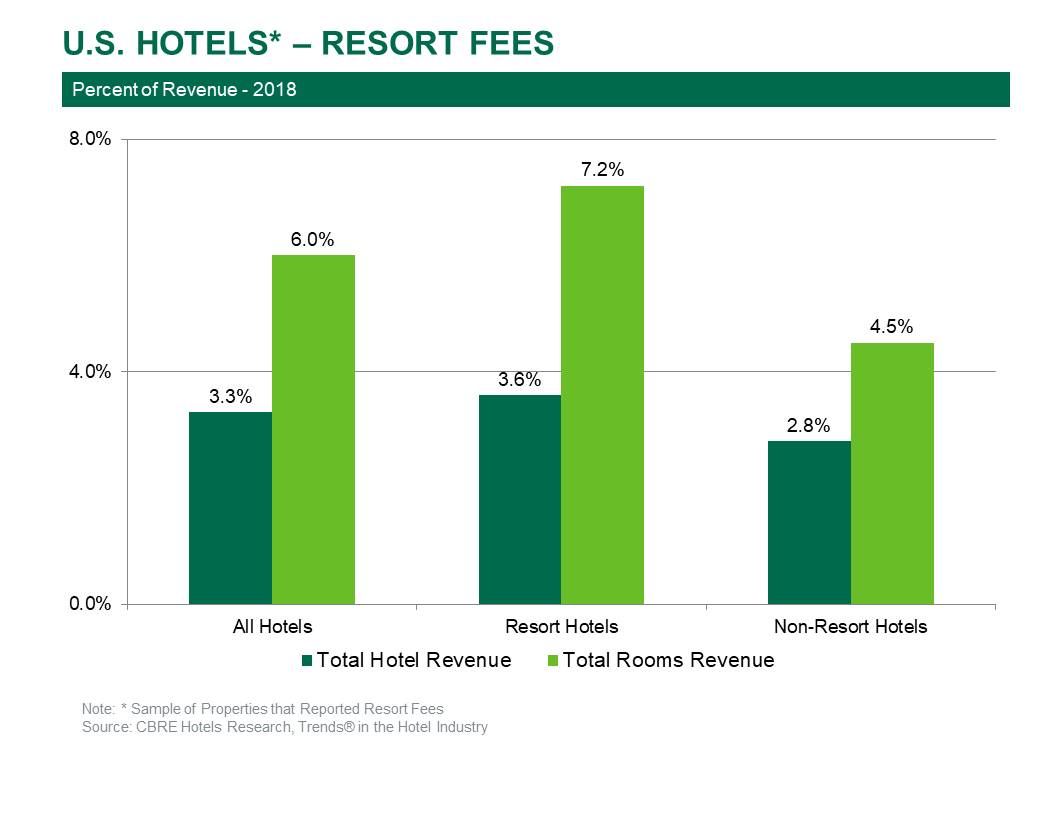 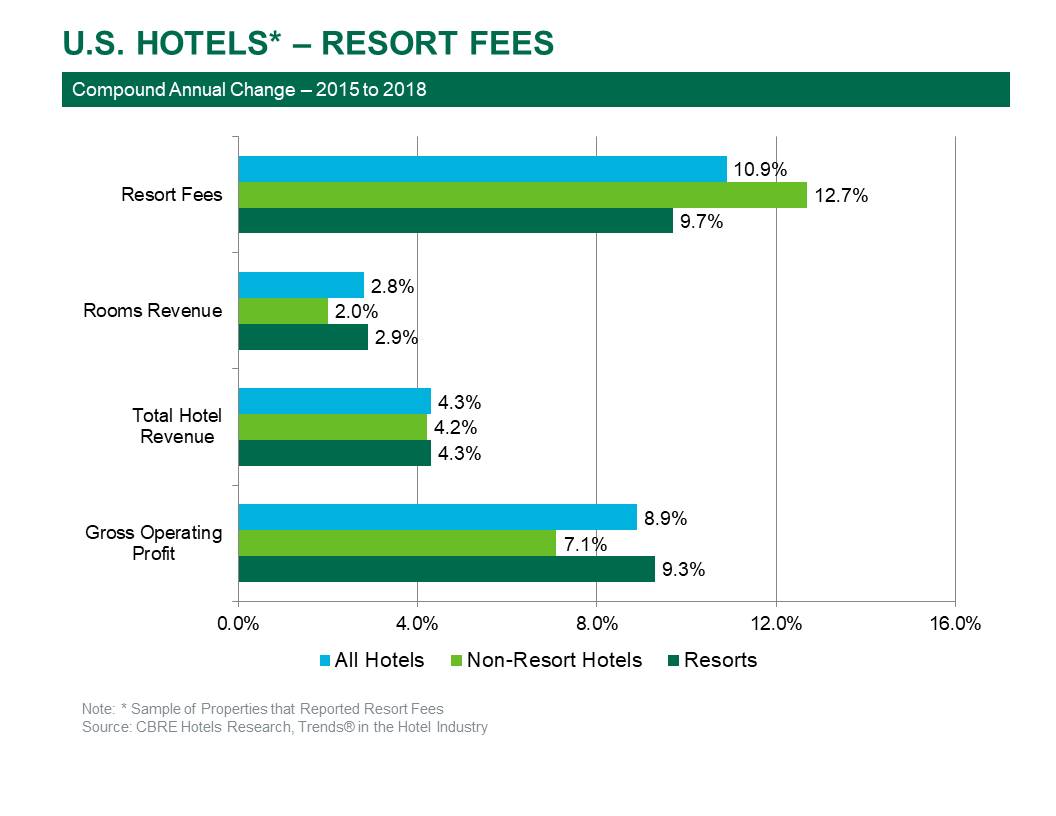 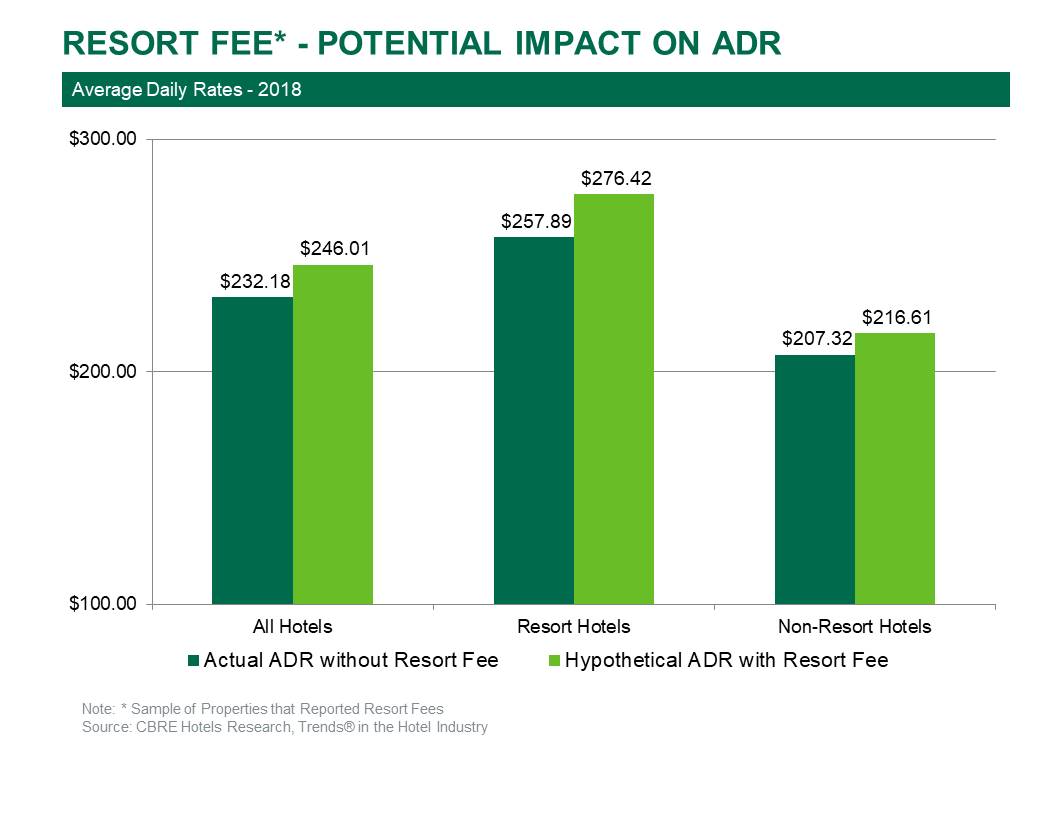 Robert Mandelbaum is Director of Research Information Services for CBRE Hotels Research.  To create a custom report that benchmarks the resort fees earned by your hotel(s), please contact [email protected].  This article was published in the January 2020 edition of Lodging.

A Solution for The Hotel Industry’s Staffing Shortage Problem
IDeaS Hosts Converge 2022 Hospitality Revenue Summit in New York
Hotels Are Filling Up. Guest Stomachs, Too.
How Hotels Can Diversify Their Revenue Streams With Flexible & Mobile Technology
Information and Telecommunications Costs
Lodging Market Should Recover Fully by 2023
Hotel Property Taxes – An Opportunity to Cut a Cost
Hotel Insurance – A Largely Uncontrollable Cost
UpStay Continues Global Growth Momentum With Expansion Into North American Hospitality Market
For Hotels, Revenue Is the Sprint, Profit Is the Marathon
Hospitality Financial Leadership: Why Your Hotel Needs a Daily “Pick-Up” Report
Rating Rate: How Hoteliers Made the Right Decisions This Time Around
What Hoteliers Can Learn About Revenue Management From Shark Tank
Hospitality Financial Leadership – Top 10 ‘MUST DO’ Separation of Duties and Controls
CBRE Forecasts Continued Hotel Recovery in 2022 Despite Increasing Risks
CBRE Forecasts Continued Hotel Recovery in 2022 Despite Increasing Risks
Travel in 2022: Addressing the Demands of a New Era
Hospitality Financial Leadership: Balancing Daily Revenues and Settlements
Investing in Training Hotel Employees
What Hospitality Statistics Mean to Your Hotel Business?