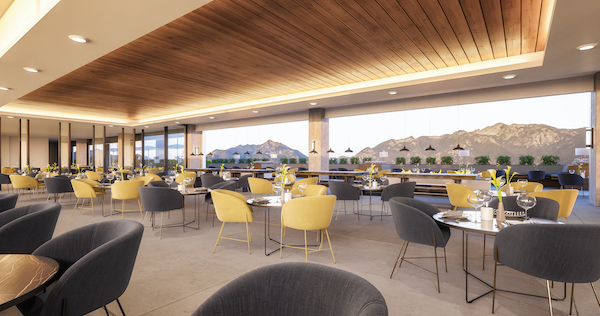 Minneapolis – December 9, 2020 – Radisson Hotel Group today announced the signing of Radisson Blu Sandy – Salt Lake City. The hotel, which will be managed by Radisson Hotel Group, will be part of a multi-phased, mixed-use development project with Raddon Development, called The Summit at the Cairns, designed by Beecher Walker Architects. The first phase of the project, comprised of a 13-story building, will feature conference facilities, a variety of guest rooms, a rooftop restaurant and bar, pool deck, full-service spa, fitness center, top level condominiums and parking structure.

“I am proud to be announcing the signing of this phenomenal hotel that will give guests a one-of-a-kind experience in the beautiful state of Utah,” said Phil Hugh, chief development officer, Americas, Radisson Hotel Group. “It has been incredible working alongside Raddon Development as they bring this exceptional development project to life, while creating a true destination for our guests with a variety of culinary options, shopping and activities for outdoor enthusiasts in this urban gem. The signing of this hotel displays our rapid growth of Radisson Blu in the recent months as we will be nearly doubling the brand’s portfolio in the Americas with four key hotel openings in Q4 of this year.”

Radisson Blu Sandy – Salt Lake City will offer 235 spacious and elegant guest rooms and suites. The hotel’s rooftop will feature FireLake Grill House & Cocktail Bar, a signature concept of Radisson Blu properties in the U.S., centered around live fire cooking and farm-to-table dining. Hosting a corporate function or special event will be an option within the hotel’s approximately 22,000 square feet of meeting space. The Amenity Deck is guaranteed to amaze guests with its state-of-the-art fitness center and both an indoor and outdoor pool and spa overlooking the stunning Wasatch Mountains. The hotel is anticipated to begin construction in Q4 2021.

“A full-service conference hotel has long been an important objective for the downtown Cairns area, but to have the added bonus of that hotel being an upscale global brand is a real jewel for the city,” said Mayor Kurt Bradburn of Sandy City. “Radisson Blu’s remarkable facilities and service along with their international presence is a perfect fit for our city and the valley as a whole.”

“We are thrilled to have Radisson Hotel Group and Sandy City as our partners on this highly anticipated new development,” said Ron Raddon, chairman, Raddon Development.

Adam Gatto and Molly Wilson of Colliers International Hotels and Hospitality Group worked exclusively on behalf of Raddon Development to secure and execute the five-star Radisson Blu for the Cairns development. For more information, visit the company’s website at www.colliers.com.

More than 100,000 team members work for Radisson Hotel Group and at the hotels licensed to operate in its systems.