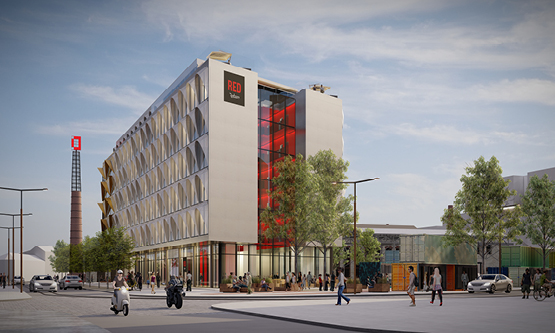 Brussels/Tallinn – September 10, 2019 – Radisson Hotel Group, one of the largest and most dynamic hotel groups in the world, is pleased to announce the signing of another Radisson RED property in Europe – continuing the brand’s global expansion. Due to open in late 2023, the Radisson RED Tallinn (Estonia) will arrive in the heart of the country’s lively capital as the group’s third hotel brand – alongside Radisson Blu and Park Inn by Radisson.

The Estonian capital is a destination that’s rapidly growing in popularity. Last year, 4.65m international visitors traveled to Tallinn, taking the opportunity to experience the many creative and cultural areas of the city.

Elie Younes, Executive Vice President & Chief Development Officer, Radisson Hotel Group, said: “We are excited to have signed our fifth property in the city and, with this agreement, introduced Radisson RED across all three Baltic capitals. The new Radisson RED will be located within the Telliskivi district, which is known as the lifestyle area of the city – a perfect match for Radisson RED.”

Anne Aland, Head of Astri Group, commented: “The Astri Group aspires to create multi-functional spaces that serve the needs of a broad target group, and Balti Station Market is a great example of how trade and leisure can be combined. We are honored to have an agreement to develop the first Radisson RED in Estonia within the immediate vicinity of the Baltic Station Market. Radisson RED is a unique, innovative and exciting hotel brand – a concept that blends perfectly with the Telliskivi area. We believe that the addition of the hotel to the area will support an increase in the number of visitors and will play an important role in creating a vibrant environment for the various start-ups with offices in the Telliskivi area.”

The new-build, 150-room Radisson RED Tallinn will be part of a mixed-use scheme – with the building also featuring co-working and office space. The hotel itself will offer the ‘all day dining’ Oui Bar & Ktchn that Radisson RED is known for, along with a destination Sky Bar, meeting rooms and a fitness area.

The Telliskivi district is a warehouse district that borders the Old Town and is home to the Balti Jaama Turg market. It is also the creative center of the city, featuring an array of art studios, bars and restaurants, fashion stores, galleries and IT start-ups.

The Old Town – home to some of Europe’s best-preserved Medieval buildings – is only 0.5km away, just a five-minute walk from the hotel, while the Rotermann Quarter (with its renovated buildings showcasing the future of the city) is 1.5km away. The hotel will be easily accessible to international travelers, just 6.5km from Tallinn Airport, with the main railway station across the road making it easy for guests to get around by train.

The Radisson RED Tallinn will be operated by Radisson Hotel Group under an International Management Agreement.