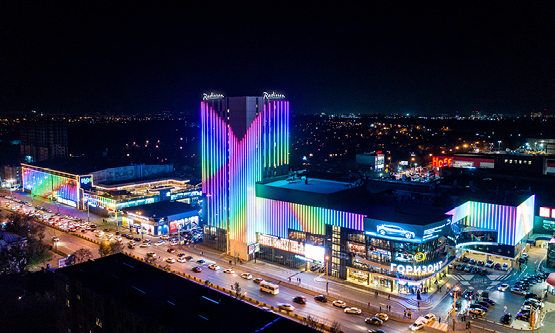 Elie Younes, Executive Vice President & Chief Development Officer, Radisson Hotel Group, said: “We are extremely proud to establish Radisson in Russia, and with this, further strengthening our position as the leading international hotel group in the region. This signing brings our Russian portfolio up to a total of 39 hotels and 10,000+ rooms in operation or under development.”

Dan Polonsky, General Director of TK Gorizont JSC said: “The new hotel is a part of the large multi-functional shopping and entertainment complex called Gorizont. Radisson Hotel Gorizont Rostov-on-Don will be a convenient location for Russian and foreign partners, as well as guests of the city. This will bring Gorizont Mall to a fundamentally new level with even greater comfort and unique atmosphere.”

The hotel will offer 173 rooms and suites with a Scandinavian inspired design, an all-day restaurant and lobby lounge bar, as well as a gym, a conference hall and various meeting rooms.

Radisson is an upscale hotel brand that delivers Scandinavian-inspired hospitality and enables guests to focus on a work/life balance and find more harmony in their travel experience. Based on building meaningful relationships with guests, it features the famous Yes I Can! service attitude designed to deliver satisfaction to every guest.

Rostov-on-Don is the 10th largest city in Russia with 1.2 million inhabitants. This will be the second hotel opening for Radisson Hotel Group in the city, in addition to the prestigious Radisson Blu that opened in 2017 on the river front.

The hotel, located in the north-west area of the city, will be part of a significant mixed-use development complex, including Gorizont Mall – the largest shopping mall in Rostov-On-Don that showcases more than 350 shops and a multiplex cinema center that can be accessed directly from the hotel.