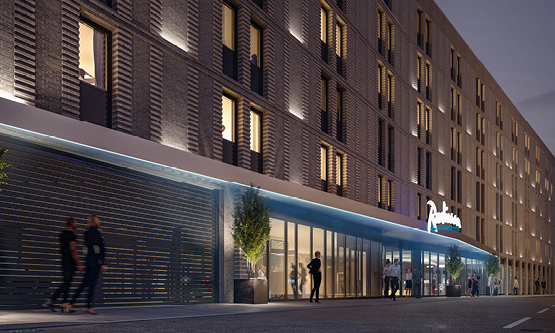 Brussels/ Frankfurt – December 2, 2019 – Radisson Hotel Group, one of the largest and most dynamic hotel groups in the world, is delighted to announce the establishment of a strategic joint venture for operating hotels in Germany and Austria. This fantastic new partnership with local partners will open opportunities for Radisson Hotel Group to accelerate their growth ambitions. The group is looking forward to boosting their roll-out of the Radisson and Radisson RED brands in the German speaking region (D-A-CH). The exciting venture will kick off with the signing of the Radisson Hotel Leipzig, which will be developed by Fay projects GmbH and operated by the newly founded Fast Lane Hospitality GmbH.

Elie Younes, Executive Vice President & Chief Development Officer, Radisson Hotel Group, said: “We aim to remain relevant to owners and investors and this new venture is a testament of our commitment. The German market is becoming increasingly versatile and requires an unconventional approach to accelerate growth. We look forward to a successful journey with our partners and to unlock value to various stakeholders through this venture.”

“Leipzig is about to join Germany’s ‘Big Seven’ cities, so our hotel development in a central downtown location comes at a rather opportune time, especially because hotel accommodation in the trade fair city continues to grow at an annual rate of around five percent,” said Wolfgang Heid, Chairman of the Board and CEO of FAY Projects GmbH. “We are confident that this new asset will be one of the outstanding Radisson hotels in Germany.”

When its doors open in 2022, the fully equipped, upscale Radisson Hotel Leipzig will provide Scandinavian-inspired hospitality in a creative city dripping with history. With its prime location, the new property will allow guests easy access to key hubs in Leipzig’s city center including the main station, as well as having a fast connection to the Leipzig Fair right by the hotel. From the hotel’s doorstep, guests can reach all of the bustling city’s most famous attractions in just five to ten minutes. The gleaming, newly-built hotel will have a total of 224 rooms, ready to welcome more guests to the vibrant and youthful Leipzig. On top of that, the Radisson Hotel Leipzig will also offer those holiday comforts we all crave: a delicious breakfast restaurant for those sleepy mornings, a stylish bar and an on-site gym.

The trade-fair city of Leipzig proudly ranks in the top 10 German cities chosen by travelers, with more than 3.4 million overnight visitors per year. With a fascinating cultural scene and a deep significance for music-lovers, in 2018 Leipzig once again surpassed the already astonishing figures of 2017.

FAY Projects GmbH specializes in the development of sophisticated urban construction projects and stands for the creation of sustainable real estate assets. This is confirmed by the awards with the gold DGNB pre-certificate for various office projects, i.a. New E.ON construction in Regensburg, Waidmarkt in Cologne and ²BAC Berlin-Brandenburg. The company has the expertise and know-how of more than five decades with over 100 successfully completed real estate projects. The management attaches great importance to a sustainably shaped and grown corporate culture.