Quantifying the Franchise Relationship During COVID-19

Home/Quantifying the Franchise Relationship During COVID-19

Quantifying the Franchise Relationship During COVID-19

In 2020, the average hotel in CBRE’s annual Trends® in the Hotel Industry survey experienced a 108 percent decline in earnings before interest, taxes, depreciation and amortization (EBITDA), resulting in an EBITDA margin of -5.5 percent.  For hotels, EBITDA represents the cash flows from operations that are used to fund debt service and provide returns to investors.  This is by far the greatest decline in EBITDA since CBRE began tracking the performance of the U.S. lodging industry in the 1930s.

Facing such traumatic declines in profitability and insolvency, hotel owners reached out to their lenders, investors and vendors to gain some relief from their expense obligations.  Given the uncontrollable circumstances that caused the precipitous decline in performance, most of these related parties were sympathetic and provided some reprieve.

Among the compassionate partners that were sensitive to the plight of hotel owners in 2020 were the franchisors.  In general, most brands relaxed required service and amenity standards and delayed deadlines for property renovations.  This allowed owners to cut operating costs and utilize cash reserves that had been designated for capital projects.

For our Trends® in the Hotel Industry survey CBRE captures four different franchise-related fees on a discrete basis.

For this analysis, the sum of these four components comprises “total franchise-related fees”.

Among all the franchise fee components, reservation fees declined the least, implying that a greater percentage of revenue was earned from guests booking through the hotel reservation system.  Conversely, the greatest percentage decline was observed in payments made to support the brand’s guest loyalty programs.  This is reflective of the decline in frequent corporate travelers who are members of the loyalty programs.

When sorting the sample by chain scale, we find the greatest percentage point differences at the pricing extremes of the chain-scale spectrum.  Fortunately for the owners of economy and midscale hotels, rooms revenue declined by just 14 percent, but franchise-related payments dropped by only 0.8 percent.  Luxury hotels suffered the greatest fall in revenues (-63.5%) but saw their franchise-related fees decline by just 41 percent.

Upper-midscale properties appear to have benefited from the generosity of the franchisors. Rooms revenue at these properties fell by 46.4 percent during 2020, but the franchise-related payments made to their brands declined by an even greater 50.9 percent.

Possibly in response to feedback from owners or observations made after watching hotel owners suffer for a full year, the relative changes in revenues and franchise-related fees swung in favor of the franchisees in 2021.

From 2020 to 2021, the rooms revenue for the hotels in our analytical sample increased by 55.4 percent, but franchise-related payments grew by just 45.9 percent.  Reservation system-related fees lagged the most in the rise (+26.6%), while payments made to support the marketing and advertising campaigns of the brands increased the most (+54.8%).  Of note is the 49.1 percent increase in guest loyalty program payments, which is greater than the 45.9 percent increase in total franchise-related payment.  This is indicative of the beginning of the return of corporate travelers in 2021.

Based on feedback from our clients, the relationship between the hotel brands and their franchisees was favorable and constructive in 2020.  Both recognized that the impact of COVID was largely out of their control, and the best chances for both entities to survive relied on cooperation.  Concessions regarding brand standards and deferred renovations helped owners who suffered from a lack of cash.  However, it appears that franchisors needed the lifeline of fees from owners to sustain their ability to continue to promote the brand and drive business to their franchisees. 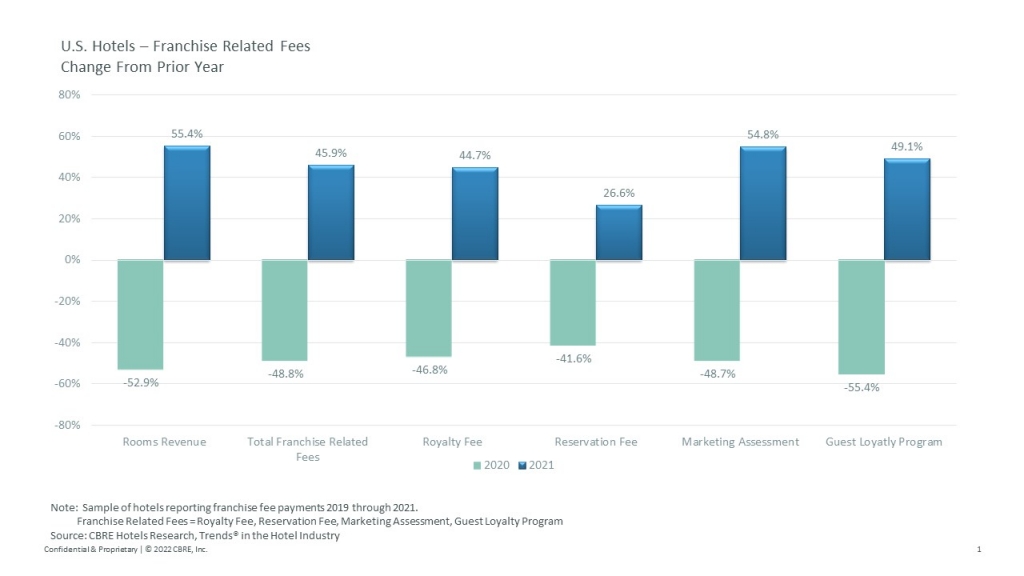 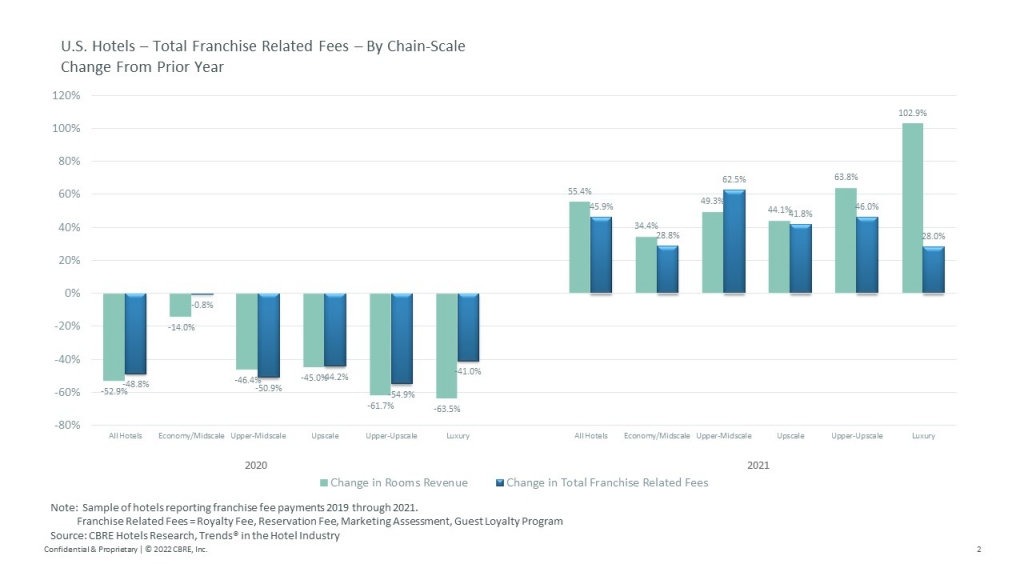 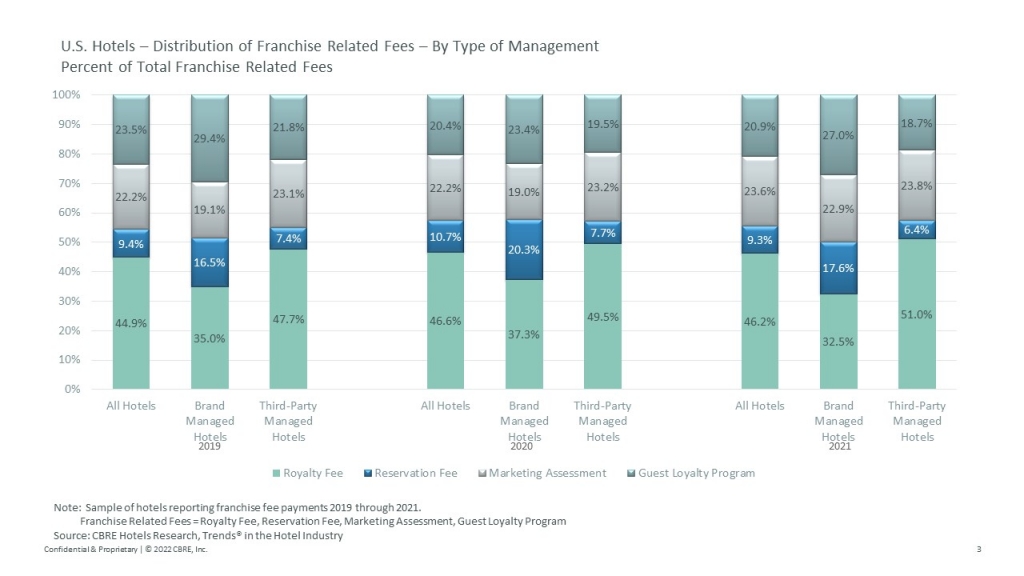 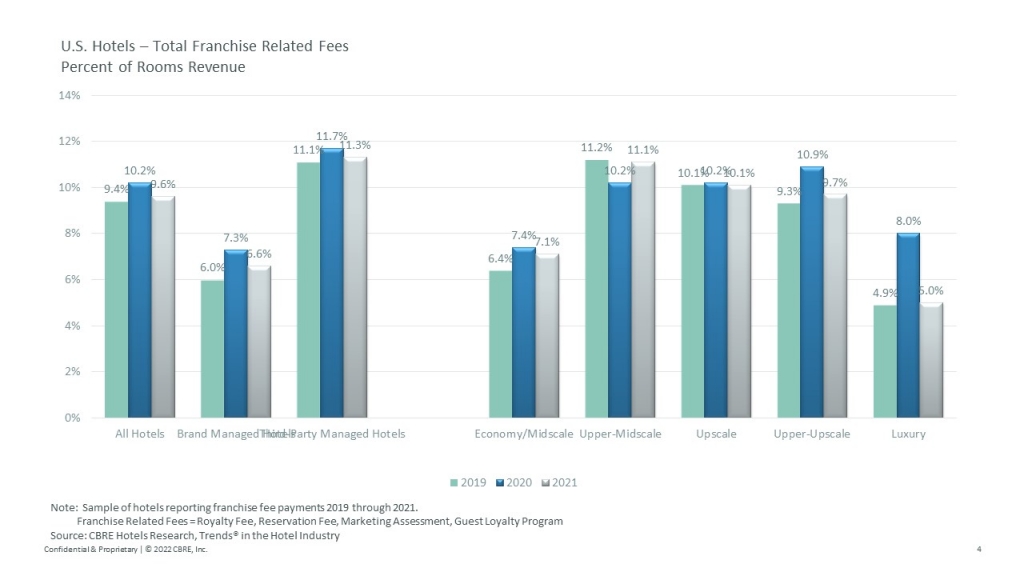 Robert Mandelbaum is the Director of Research Information Services for CBRE Hotels’ Americas Research.  To benchmark the four franchise cost components of your property(s), please visit https://pip.cbrehotels.com/benchmarker, or call (855) 223-1200.  This article was published in the July/August edition of Lodging.