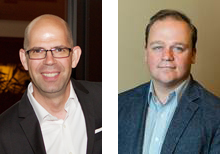 CARMEL, CALIF. (September 14, 2017) – Quail Lodge & Golf Club is pleased to announce the promotion of Kai Lermen from Assistant General Manager/Clubhouse Manager to General Manager, and joining the team from Peninsula Chicago is Jan Verweij, who was a part of Quail’s re-opening team in 2012 and will now fill the role of Resort Manager.

“Lermen and Verweij have both contributed to the success of Quail Lodge since its re-opening, and we couldn’t be more excited about their promotions,” says Maria Razumich-Zec, Regional Vice President of The Peninsula Hotels. “Both team members are committed to upholding Quail Lodge’s standard of providing excellent customer service and we’re looking forward to their continued achievements.”

With over 12 years of experience in the hospitality industry, and a career in room’s division management, Jan Verweij brings a wealth of knowledge to Quail Lodge. In his previous role, Verweij was Director of Front Office for The Peninsula Chicago, where he joined the Company in 2007 and progressed through several positions to his current role. Verweij is very familiar with Quail Lodge and made significant contributions to their re-opening activities in 2012 and 2013. This familiarity with the property and previous experience will help to ensure his continued success as Resort Manager.

Nestled on 850 acres, Quail Lodge & Golf Club includes many trails, beautiful lakes, lush gardens and rolling hills. The Quail Golf Course reopened its newly refined 18-holes in May 2015. The Lodge is located in the heart of sunny Carmel Valley, California, and is managed by The Peninsula Hotels, owned and operated by The Hongkong and Shanghai Hotels, Limited (HSH), since 1997. Quail Lodge is home to The Quail, A Motorsports Gathering, celebrating its 15th year as one of the premier events in the automotive world, and The Quail Motorcycle Gathering, in its 10th year. For more information about Quail Lodge & Golf Club, please visit www.quaillodge.com.