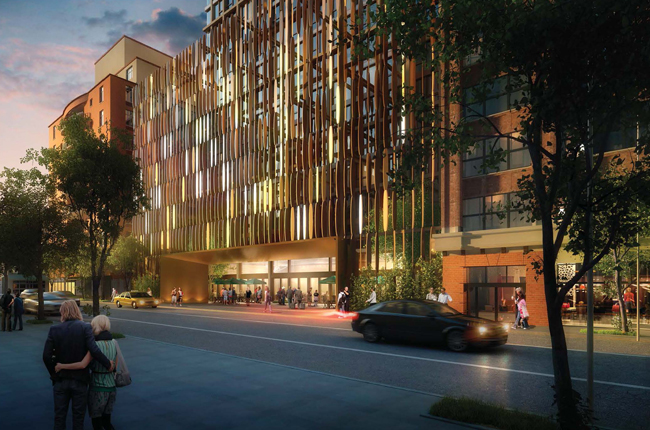 NEW YORK (Nov. 25, 2015) – Quadrum Global (“Quadrum”), an international developer and investment firm focused on value-added properties, announced today that it will build a hotel at 351 West 38th Street, a Garment District property it acquired last year. The firm has hired two key advisors who will begin the planning process for the new hotel. JLL’s Hotels & Hospitality Group will advise Quadrum on the selection of a hotel brand and operator to align with the hotel’s lifestyle amenities and services. In addition, Quadrum has commissioned award-winning Marvel Architects to design the 26-story hotel, which will include more than 500 guest rooms.

Quadrum purchased the parcel earlier this year. Located within the boundaries of the Hudson Yards district, within walking distance of the Jacob Javitz Convention Center and the High Line, the property is perfectly situated to meet the needs of visitors to New York City who are looking for a combination of proximity to world-class dining, nightlife and attractions; stylish design; rich amenities; and affordability. In addition to acquiring the property, Quadrum also has the opportunity to purchase air rights, which would allow for increased density.

Oleg Pavlov, Quadrum’s founder and chief executive officer commented: “West Midtown, particularly the Hudson Yards area, is in the process of a historic redevelopment that will ultimately make it one of the world’s urban marvels. JLL’s Hotels & Hospitality Strategic Advisory and Asset Management Group and Marvel will play a key role in realizing the full potential of the site, which is right along the path of development connecting Times Square and Hudson Yards.”

JLL's Hotels & Hospitality Group has completed more transactions than any other hotel and hospitality real estate advisor in the world, totaling $51 billion over the last five years. Between negotiating some of the world's biggest property deals, the group's 340-strong global team also executed 4,600 advisory, valuation, and asset management assignments.

“The developer is creating a unique project with a one of a kind architectural identity that will give an operator the opportunity to brand and operate a flagship property in one of New York City’s most transformative markets,” said Edouard Schwob, Senior Vice President at JLL.

Based in New York City and San Juan, Marvel Architects has established a reputation for an iterative and research-driven design approach. Rather than focusing on a specific project typology, it is dedicated to revealing the essential qualities of a site or structure and leveraging its potential. Using the philosophy that designs are a result of the firm’s process, not the reverse, Marvel has led the design and construction of public spaces, hotels, multi- and single-family homes, museums, universities, libraries, retail stores, performance spaces and corporate headquarters, earning more than 70 awards from peers and clients.

“We are thrilled to work with Quadrum on a hotel straddling ‘old’ New York's Garment District and ‘new’ New York's Hudson Yards,” said architect Andrew Torres. “Using the zoning regulations, we are designing a vibrant building that balances a pedestrian-inviting street screen and a tall building behind. We are happy to be a part of Midtown's westward development.”

Quadrum Global is a global real estate developer and investment firm focused on value-add opportunities. Through its network of six offices and affiliates worldwide, the firm is currently targeting value-add opportunities mainly in the U.S. and the U.K. Since 2009, the group has committed over $1 billion in capital to real estate investments in the US and grown its total portfolio to $2 billion. For more information, visit www.quadrumglobal.com.

JLL (NYSE: JLL) is a professional services and investment management firm offering specialized real estate services to clients seeking increased value by owning, occupying and investing in real estate. A Fortune 500 company with annual fee revenue of $4.7 billion and gross revenue of $5.4 billion, JLL has more than 230 corporate offices, operates in 80 countries and has a global workforce of approximately 58,000.  On behalf of its clients, the firm provides management and real estate outsourcing services for a property portfolio of 3.4 billion square feet, or 316 million square meters, and completed $118 billion in sales, acquisitions and finance transactions in 2014. Its investment management business, LaSalle Investment Management, has $57.2 billion of real estate assets under management. JLL is the brand name, and a registered trademark, of Jones Lang LaSalle Incorporated. For further information, visit www.jll.com.

Why More Hotels Are Owned by Franchisees
The Hotel Experience Gets High-Tech
Why Hotels Are Taking Wellness Seriously
Why Select Service Hotels Are Coming to the City Center
Why Historic Buildings Make Great Hotels
Puerto Rico Lodging Market Poised for Comeback
JLL U.S. Hotel Market Overview
How Hotels Are Meeting the Demand for Quality Meeting Space
Why Lifestyle Hotels Are Not Just for Millennials
Revisiting the Public Ownership of Convention Hotels
How Many Tourists Is Too Many?
How France’s Hotels Are Rethinking Style and Space
Hospitality M&A Focus to Shift to Smaller, Niche Platforms in 2019
How France’s Mountain Hotel Industry Is Exploring New Routes
Why Coworking Is Coming to Hotels
How Hotels Are Upgrading Their Sustainability Efforts
Big Hotel Brands Set Their Sights on Portugal’s Cities
Oxford and Quadrum Global Launch $75 Million Renovation to Transform Chicago’s Iconic Essex Inn Into Hotel Essex
JLL Projects 2019 Global Hotel Investment Volume Will Total $67 Billion
Spain’s Hotels Power up for an Eco-Friendly Future