Upon reading his obituary in the press, the American writer Samuel Clemens, known by his pen name Mark Twain, famously remarked, “The report of my death was an exaggeration.”  Although there is no question that the global pandemic has adversely impacted many, the world has not ended.

While the risks of reinstated limitations on social activity and shelter-in-place orders remain, concerns surrounding the effectiveness of vaccines on existing and unknown variants, coupled with an anti-vaxxer movement, pose the biggest risks to ending the current pandemic.  With that said, the spring season of 2021 has sparked optimism in the overall economy and hospitality industry as compared to this time last year. Improving/warmer weather conditions, $1.9 trillion of stimulus, a surge in vaccinations, more states lifting business restrictions, record high personal saving rates, and positive consumer confidence are all converging to create a potent mix to feed a growing U.S. economy. As the pandemic continues to abate, the lodging industry is poised to stage a strong recovery.

As swiftly as the pandemic led to widespread closures and cancellations beginning in March 2020, signs of an equally robust recovery are percolating with 2021 expected to show the strongest growth ever in key lodging industry metrics.  As more people become vaccinated, travel is anticipated to vigorously rebound.  Pent up leisure demand is about to be unleashed as bookings have accelerated dramatically over the past several weeks, and the upcoming summer season is anticipated to be the strongest ever. With leisure demand driving the recovery, the sector is also now seeing signs of life in corporate and group business.

While the last year has demonstrated that certain tasks and roles can be performed outside of an office environment, many business leaders acknowledge that over the long-term productivity declines in a non-office environment. Company culture, which cannot be built on a foundation of Zoom calls and remote meetings evolves from leadership’s ability to impart the priorities and philosophy of the enterprise through meaningful interpersonal relationships. Corporate related travel will rebound as the need for a communal physical office space where human interaction, collaboration, competition, and culture thrive, will always be preferred over business being conducted remotely.

During the second half of 2021, group meeting and convention business is anticipated to revive initially with relative smaller numbers of attendees due to capacity limits. Ultimately, the nation’s convention and trade show industry should return to pre-pandemic levels over the next 18 to 30 months.  While COVID-19 protocols for large-scale indoor events have yet to be determined, and will vary by city and/or state, meeting planners anticipate proof of vaccination and/or negative testing verifications to be required. Hybrid meetings will evolve as some elements of future events are still likely to be conducted via streaming video, accommodating virus-cautious attendees who prefer to stay at home.

As the demand for transient hotel accommodations has increased over the past several months, hiring/re-hiring employees has been a challenge due in part to federal unemployment benefits that Congress renewed until September 2021. Many hotel industry workers who were furloughed and/or terminated may never return, as they have moved on to other jobs that are perceived as more stable and/or lucrative.  Furthermore, many corporations including e-commerce and customer service call centers are adopting permanent and attractive work-from-home arrangements.  Finally, the challenge of a worker shortage could quickly compound next year, as most economically viable hotels will have re-opened.

Over time, permanent hotel closures combined with the shrinking construction financing market and higher costs to build, will alleviate the average rate headwinds that urban hotels have been facing over the past several years. Benign supply growth during the next several years will be a positive for the pending recovery.

The hotel industry rapidly adjusted its operating model due to the devastating effects of the global health crisis. However, permanently embracing the pandemic induced cost savings as the market recovers will be a key challenge.  Maintaining reduced staffing levels, keeping unprofitable food and/or beverage outlets shuttered, and removal of some guestroom amenities has contributed to dramatically reducing full and limited-service hotel break even points. It remains to be seen if and/or when these break-even points will increase over time due to “amenity creep” that typically evolves during periods of strong transient lodging demand.

•  Nine trades or roughly one third of the national quarter total occurred in the state of Florida, followed by five in California and three in Texas.

•  Three trades were reported to be predicated upon alternative use redevelopment opportunities.

•  The Drew Las Vegas (formerly Fontainebleau Las Vegas) which is roughly seventy five percent complete, was acquired through a deed in lieu of foreclosure for $350 million, by a joint venture of Koch Real Estate Investments and Fontainebleau Development. The project which originally commenced construction in 2006, was roughly 60 percent complete when it went into bankruptcy in 2009 during the height of the Great Recession. In 2010, legendary contrarian investor Carl Icahn acquired the asset for $148 million or approximately 7.4 percent of the actual cost previously expended. During 2017, Icahn, who never resumed construction, quadrupled his investment by selling the unfinished property for $600 million to a venture that included Witkoff Group and New Valley LLC. In addition to rooms, the development upon completion is anticipated to include:   a 95,000 sq. ft. casino, a 60,000 sq. ft. spa, 3,300-seat performing arts theatre, 180,000 sq. ft. of retail space, 400,000 sq. ft. of indoor and outdoor conference space, nightclubs, and 24 restaurants and 6 lounges.

The good news is that flexible and accommodative forbearance approaches by lenders and servicers have allowed many hotel owners to ride out what now appears to have been the worst part of the global health crisis in 2020.   The bad news is the nearly $27 billion in lodging sector debt that is set to mature through the end of 2021.  At this juncture many lenders and servicers are becoming wary of the number of extensions distressed borrowers need to further hang on to owned assets.

A wave of loan defaults continues to impact the lodging industry with lenders and servicers considering forbearance and loan modification asks. Since the beginning of the year, several hotel bankruptcies have been filed, a trend which is anticipated to increase as owners of struggling assets remain unable to pay their debt service. Although some lenders are still granting flexibility to borrowers in hopes that the market will rebound this summer, every day that passes with hotel occupancies remaining low means more lenders losing patience and leaning toward foreclosing on properties. With many hotels on the brink of foreclosure, the next two quarters of hotel performance will determine the fate of many properties. If this summer’s hospitality demand is weaker than expected, the growing trickle of hotel bankruptcies could turn into a surge of distressed asset sales.

There is an extraordinary amount of liquidity in the market today, particularly relative to the limited availability of opportunities. Domestic and international private equity funds, hedge funds, and high net worth investors, along with U.S. REITS are actively pursuing prospects to deploy capital at an attractive basis, as the disparity between assets with capital needs, and depth of money sources seeking to invest in lodging assets has never been greater. During the past several weeks an improving debt/financing market has broadly raised the valuation floor for hotels.

In addition to the previously described significant property bets in Las Vegas, Starwood Capital Group and Blackstone’s recently announced $6.0 billion pending acquisition of Extended Stay America also reflects investor confidence in the lodging sector.  Many institutional investors perceive the odds being higher rather than lower that some level of inflation will emerge in the near term.   Daily leasing of guestrooms coupled with the continuous repricing of room nights, position hotel investment as a particularly effective hedge against inflation. Additionally, savvy and patient sponsors know that over the long term the phenomenon of urbanization will endure as corporations will always follow the preferences of young, skilled talent into cities in primary markets and the downtowns of secondary and tertiary metropolitan areas. U.S. cities are the most exciting, dynamic, energizing, fun, interesting, challenging, and enduring places to live, work, and play. Sophisticated long term contrarian investors, who at the right basis, acquire lodging assets in oversaturated markets, those with strong labor unions and/or unfavorable ground leases, as well as big box convention hotels are still likely to realize tremendous returns on investments over the long term. 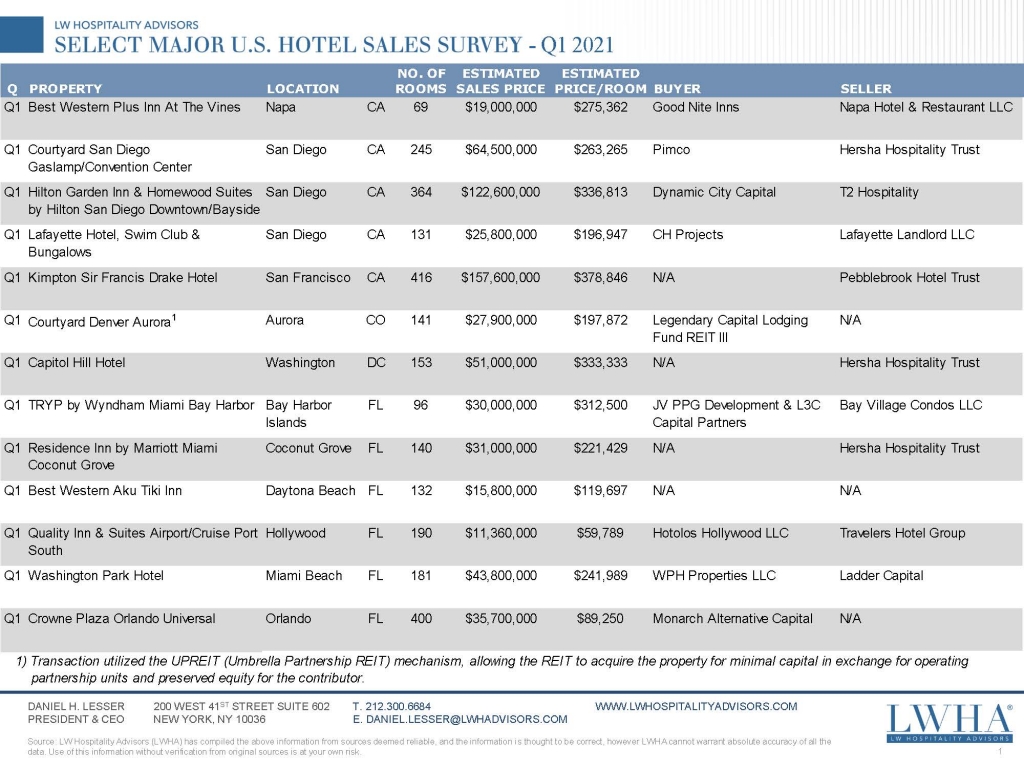 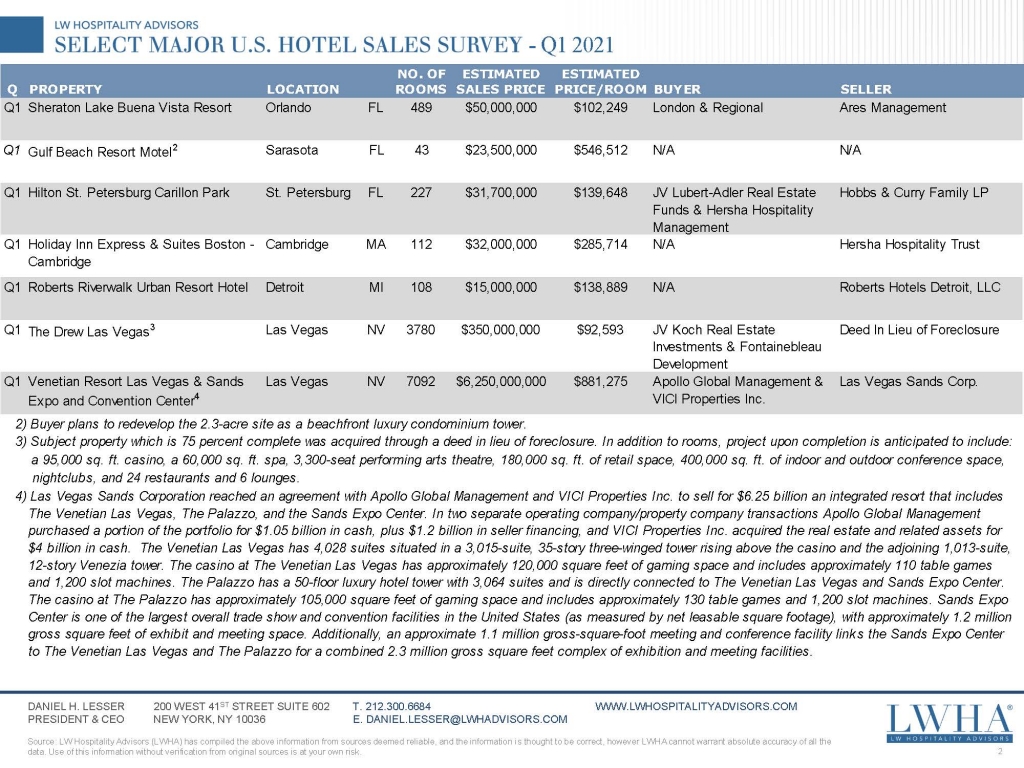 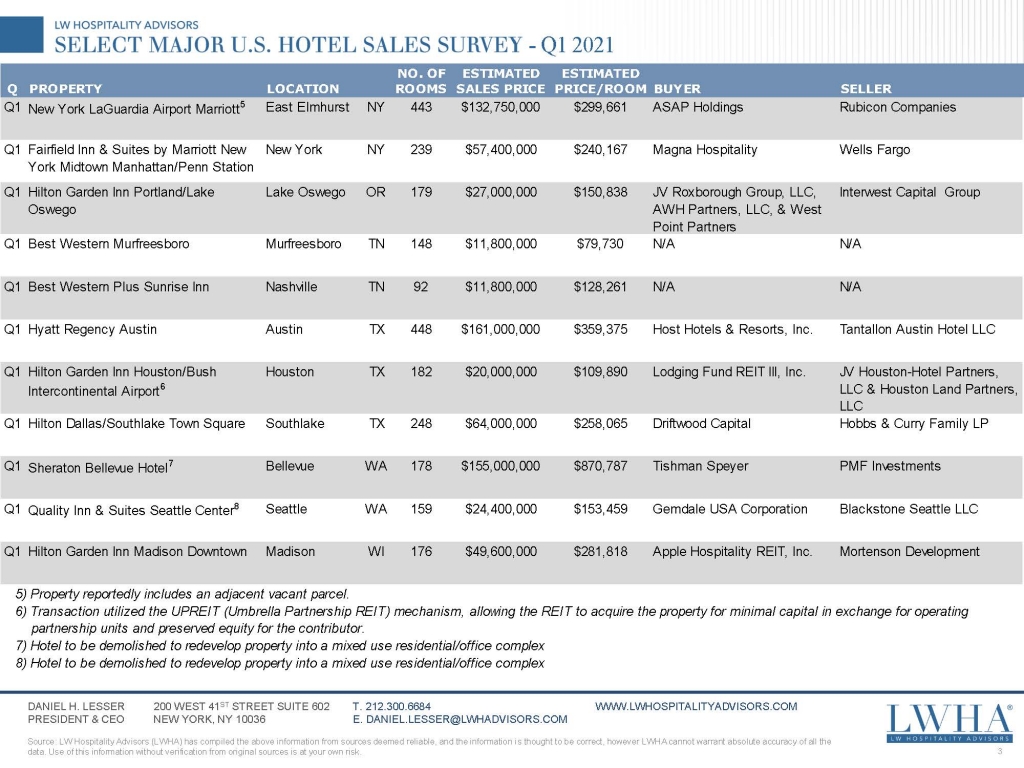