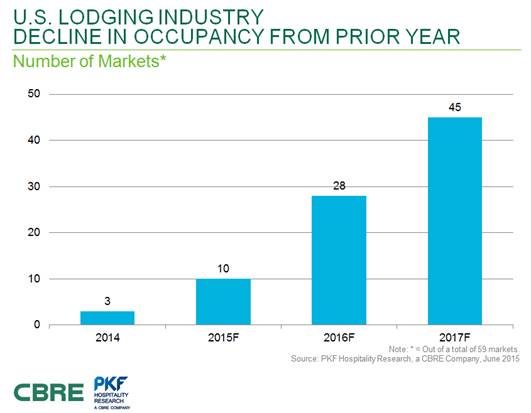 June 4, 2015, Atlanta, Ga. – The outlook for the U.S. lodging industry continues to be extremely strong, according to the recently released June 2015 edition of PKF Hospitality Research’s (PKF-HR) Hotel Horizons® (PKF-HR is a CBRE company). The report forecasts that U.S. hotels will continue to enjoy revenue per available room (RevPAR) growth more than twice the long-run average (7.2 percent increase in 2015 and 6.8 percent in 2016). The slowdown in 2016 should not worry hoteliers because the growth in average daily room rate (ADR) will drive the increase in RevPAR, which ultimately is more profitable for hoteliers.

“I look back 90 days ago at our March 2015 forecasts and see that our expectations for hotel performance have not changed that much,” said R. Mark Woodworth, senior managing director of PKF-HR. “The consistency of our forecasts is an indication that the U.S. lodging industry is now in that part of the business cycle where performance is highly predictable.” In March of 2015, PKF-HR forecast RevPAR growth of 7.3 percent for 2015 and 6.5 percent for 2016.

While the outlook for the industry has not changed much, there are always evolving current events that need to be taken into consideration. During the first quarter of 2015 lodging demand grew at a very healthy 4.2 percent. However, this was less than the PKF-HR forecast of 5.1 percent.

“Our over-estimation of first quarter 2015 demand growth can be attributed to a combination of economic and non-economic factors,” said John B. (Jack) Corgel, Ph.D., the Robert C. Baker professor of real estate at the Cornell University School of Hotel Administration and senior advisor to PKF-HR. “Extreme winter weather had a negative impact on hotel performance in Boston, New York, and Chicago. Low oil prices have suppressed gasoline prices, but impaired local economies in the North and South Central regions of the country. Finally, the surge in the value of the U.S. dollar has hurt exports and caused some contraction in manufacturing. Fortunately, we have yet to see any significant declines in inbound overseas travelers.”

Supply Growth in the Cities

One of the hallmarks of the recovery of the U.S. lodging industry from the depths of the great recession in 2009 has been the limited amount of new hotels coming into the market. From 2011 through 2014, the annual changes in lodging supply for the nation were less than 1.0 percent. The pace of hotel construction has picked up in 2015 with a net increase of 1.2 percent expected.

“As we look towards 2016, we begin to see the first impacts of a rise in the number of new hotel rooms,” said Woodworth. “Nationwide, the lodging supply is forecast to grow by 1.8 percent, just short of the long-run average rate of 1.9 percent. However, in the 59 markets tracked by PKF-HR’s Hotel Horizons® reports, the change in lodging supply is projected to be 3.1 percent.” For reference purposes, the growth in supply outside the Hotel Horizons® markets during 2016 is forecast to be just 0.7 percent.

Localized surges in supply will result in occupancy declines in 10 of the 59 metropolitan areas in the Hotel Horizons® study. PKF-HR projects the number to nearly triple to 28 of 59 in 2016.

“Fortunately occupancy rates in most markets are expected to remain above long-run levels, thus allowing for sizeable growth in real ADR,” said Woodworth. In the 10 markets expected to realize a decline in occupancy this year, seven will see an increase in supply greater than their long run average.

Even greater than the positive outlook for market conditions are the projected increases in profits for the next few years. The U.S. lodging industry is now in the midst of a six-year period (2011-2016) of continuous double-digit gains on the bottom line, the longest such streak since PKF began tracking the industry in 1937.

“We are very confident that market conditions will allow for strong revenue growth this year and next. If hotel managers continue to operate their properties as efficiently as they have the past few years, then owners, operators, lenders and investors will all benefit from the resulting profits that will drop to the bottom-line,” Woodworth concluded.

To purchase a June 2015 Hotel Horizons® report, please visit store.pkfc.com. Reports are available for each of 59 major metropolitan areas in the U.S., and contain five year projections of supply, demand, occupancy, ADR, and RevPAR.