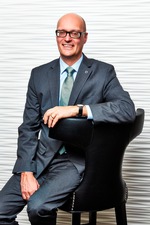 Frankfurt am Main, 01 September 2016 – Peter B. Mikkelsen, a 44-year old Dane who is the father of three children, takes over the running of the Steigenberger Hotel Cologne on Rudolfsplatz with effect from 1 September. The hotel was undergoing extensive renovation and modernisation works.

Mr. Mikkelsen’s experience in the international hotel sector stretches back for more than 25 years. He began his career by completing training in the occupation of hotel specialist at the Steigenberger Graf Zeppelin in Stuttgart before going on to achieve a degree in Hotel Administration. Mr. Mikkelsen has acquired broadly based know-how at business hotels operated by Sheraton, Hilton and Rezidor and was most recently General Manager at the Radisson Blu in Warsaw.

Steigenberger Hotels AG is one of Europe’s leading hotel companies. From its Head Office in Germany, the Steigenberger Group operates 116 hotels on three continents including 23 which are under construction or at the planning stage.

Steigenberger Hotels and Resorts includes some of the most prestigious hotels in Europe, such as the Steigenberger Frankfurter Hof and the Steigenberger Parkhotel in Düsseldorf. InterCityHotel is a medium-price brand that offers 39 hotels located in city centres and at airports. “Jaz in the City” is a new creative concept, and the first hotel to be operated under this brand opened in Amsterdam in November 2015. www.steigenbergerhotelgroup.com