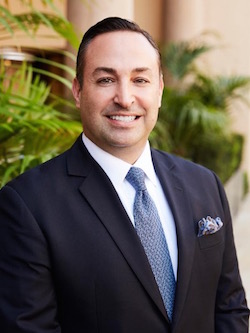 BEVERLY HILLS, Calif. (November 8, 2017) – Montage Hotels & Resorts has announced the appointment of Paul Sposare as director of sales & marketing of Montage Beverly Hills. A 30-year industry veteran, Sposare will be responsible for leading the sales, marketing and revenue team in all strategic and creative initiatives.

"With extensive knowledge of the hospitality industry, Paul will bring a fresh perspective to the hotel," said Rick Riess, vice president of Montage Hotels & Resorts and managing director of Montage Laguna Beach. "We are honored to have Paul join our team as we approach the 10-year anniversary of Montage Beverly Hills next year."  Most recently, Sposare was the area director of sales & marketing at SBE New York and led his team in successfully rebranding The Martha Washington Hotel and The Redbury Hotel. He also spent three years as the director of sales & marketing at Trump International Hotel & Tower New York, where he was recognized with the Donald J. Trump MVP Award, based on revenue achievement and employee results. Prior to his time in New York, Sposare held executive-level positions at Bardessono, Napa Valley; The Artic Club Hotel; The Pan Pacific Hotel; The Sorrento Hotel, Seattle; and The Clift Hotel, San Francisco.

Sposare attended the University of Washington and started his hotel career at The Sorrento, working his way up to director of sales & marketing during his 13 years with the property. His passion for the hospitality industry has remained steadfast throughout his career, as he continuously looks for new ways to enhance the luxury experience and inspire his Montage colleagues to create lifelong memories for guests along the way.

Located in the vibrant epicenter of Los Angeles, Montage Beverly Hills is ideally situated for shopping and dining among Rodeo Drive's storied collection of shops, restaurants and galleries. The hotel features 201 well-appointed guestrooms, including 55 suites as well as 20 private Residences. Spa Montage Beverly Hills featuring L.RAPHAEL is an urban oasis with a private relaxation space, a mosaic-tiled mineral pool, 17 tranquil treatment rooms and the flagship full-service Kim V? Salon. As the only Forbes Five Star spa in Beverly Hills, Spa Montage Beverly Hills featuring L.RAPHAEL is the exclusive West Coast destination for the renowned Swiss skincare brand's non-invasive, scientifically advanced, products and treatments for the face and body. Acclaimed chef Geoffrey Zakarian offers his Modern American cuisine at all-day dining restaurant, Georgie along with The Garden Bar, a sophisticated yet relaxed lounge with a robust beverage program and light fare.  Tucked discreetly above Georgie, £10 welcomes true connoisseurs to the hidden bar specializing in the world's most precious whisky, The Macallan Single Malt. With our commitment to sustainability, Montage Beverly Hills was the first hotel and residences to receive Gold LEED certification in Southern California.

?For information and reservations, please contact Montage Beverly Hills at (310) 860-7800 or visit www.montagehotels.com/beverlyhills.