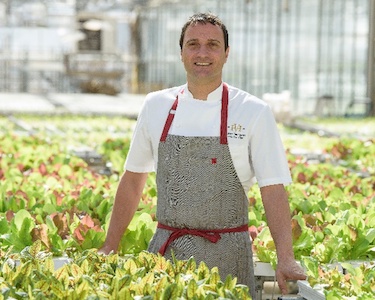 EDGARTOWN, Mass. – March 26, 2019 – Internationally acclaimed Patrice Martineau has joined Martha’s Vineyard’s Harbor View Hotel as executive chef. The French-born chef has cooked in some of the world’s finest kitchens—London’s Savoy Hotel, DANIEL in New York and The Peninsula Hotel in Tokyo, to name a few—and brings his classical training and global influence to all aspects of Harbor View Hotel’s food and beverage operation, guiding it through an exciting transformation as part of the historic Edgartown hotel’s extensive $15-million renovation. Martineau will launch two new flagship restaurants—Bettini Restaurant and Roxana Bar, whose names are inspired by the daughters of Harbor View Hotel’s owner, Bernard Chiu—with the hotel’s reopening on May 1.

“It’s a great pleasure to welcome a chef of Patrice’s caliber to Harbor View Hotel,” said Chiu. “He brings with him significant experience launching and repositioning restaurants and has led some of the finest hotel and independent kitchens on three continents. We’re excited to see how his creative vision unfolds and we look forward to introducing an elevated culinary experience to our guests, whether they are dining in one of our restaurants or planning a wedding or other social or business event at the hotel.”

Explaining his inspiration for the new restaurant names, Chiu cited his daughters, Bettina and Roxana, who are also successful entrepreneurs and philanthropists. “As a summer resident of Edgartown, I’ve become familiar, as so many others have, with the stories and names of the men whose history is entwined with this island—in particular the former whaling captains whose names are immortalized above many entry doors as well as Harbor View’s own Captain’s Cottages. I believe it is time to recognize and celebrate the strong women who are forces in our community. I wanted to acknowledge my daughters, who are a source of strength and inspiration for me, by doing something truly special that etches their names into the beautiful story of the hotel and the island.”

Chef Martineau’s culinary vision for Harbor View Hotel draws inspiration from the abundant seasonal produce and seafood available on the island, combining native and exotic ingredients to create unique flavors in his menus. He collaborates with local farms and foragers and frequents local markets for the freshest, seasonal products.

For the 95-seat Bettini, Martineau is focusing menus on locally sourced seafood and organic produce—a relationship with the island that is reinforced by the coastal view from the restaurant’s expansive windows. His concept for Roxana encompasses international tapas complemented by a bar program of beyond-top-shelf liquor. Roxana will seat 55 in an inviting setting that evokes the sensibility of a private club.

An award-winning chef, Martineau has built an impressive resume of experience at some of the most prestigious hotels and restaurants in the U.S., London and France. His move to Martha’s Vineyard followed a series of three executive chef positions in Southern California—most recently at Montage Beverly Hills. In 2007, Martineau joined the pre-opening team of The Peninsula Hotel in Tokyo, serving as chef de cuisine of Peter Restaurant for five years. For two years prior, he held the distinction of being the youngest executive chef in the history of The Savoy in London after six years as Chef Daniel Boulud’s second-in-command at DANIEL—the New York flagship of Boulud’s restaurant empire.

“Patrice is a very accomplished chef who cooks and leads with confidence, adding taste and value to the business,” said Boulud. “While knowing French cuisine well, his travels and the skills he has acquired over the last 15 years give him an interesting profile. Having experienced Patrice’s food since he left DANIEL, he cooks with creativity, pulling flavors from the depth of his knowledge on different continents as well as his classic French and American regional cuisine practice.”

Martineau spent his early career in his native France, serving as chef de partie at two world-renowned Burgundy restaurants—two-Michelin-starred Abbaye de Saint Michel and three-Michelin-starred La Côte Saint-Jacques. In his hometown of Champagne, he honed his culinary skills at the legendary Le Valentino and Le Chateaubriand.

A beloved fixture on the Vineyard since 1891, Harbor View Hotel offers luxury guest rooms and suites in the heart of historic Edgartown. From its broad veranda, the hotel boasts spectacular views of Edgartown Harbor, the Vineyard’s premier sailing and yachting location. Under the direction of Executive Chef Patrice Martineau, its restaurants offer sophisticated island-to-table dining, utilizing the Vineyard’s freshest ingredients. In 2018, Harbor View Hotel was recognized as one of the “Top Hotels in New England” in Condé Nast Traveler’s annual Readers’ Choice awards – making it the only hotel on Martha’s Vineyard to make the list. Harbor View Hotel is a member of Historic Hotels of America®. Learn more at https://www.harborviewhotel.com/.