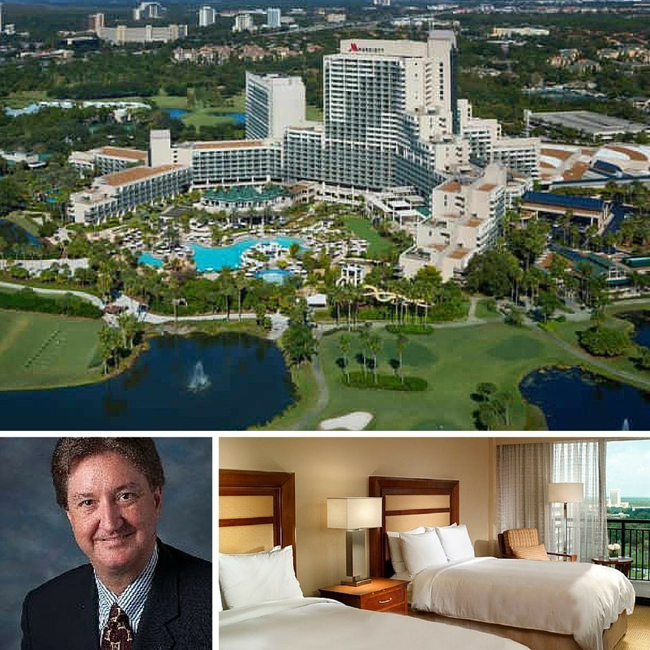 ORLANDO, Fla., May 2, 2016 — As a leader in the global hospitality industry, Orlando World Center Marriott proudly announces the appointment of Ralph Scatena as General Manager to its executive team.

In this role, Scatena will be responsible for managing the resort's day-to-day success, overseeing all operational aspects of the 2,009-room property, including everything from sales and marketing to food and beverage, while maximizing revenue and maintaining focus on strategic goals.

Scatena brings more than 30 years of experience in the hospitality sector to one of the premier Orlando resorts. Having most recently worked as General Manager at JW Marriott Desert Springs Resort & Spa in Palm Desert, CA, he led record-setting group revenue bookings and achieved the highest occupancy since 2005. Prior to that position, Scatena served at multiple notable Marriott properties, from JW Marriott Scottsdale Camelback Inn Resort & Spa in Arizona — where he was awarded JW Marriott general manager of the year — to Atlanta Marriott Marquis in Georgia. He also served on Marriott's western regional team as vice president of sales and marketing, overseeing the largest region in Marriott's sales organization.

"We are thrilled to welcome Ralph Scatena to the Orlando World Center Marriott team," said David Marriott, Chief Operating Officer of the Eastern Region. "Scatena's extensive expertise and leadership, combined with his outstanding record of management success and strong knowledge of the brand, make him the ideal choice for this position."

Towering above more than 200 prime central Florida acres, the AAA Four Diamond resort near Walt Disney World® offers everything a guest could possibly want. Still basking in the glow of an extensive multi-million dollar transformation, the resort now features everything on-site, from the Falls Pool Oasis to a championship golf course, Bill Madonna Golf Academy at Hawk's Landing Golf Club, a full-service spa and fitness center, more than 450,000 square feet of event space and 10 taste-tempting restaurants and lounges, including a food court for guests on the go. In this magnificent locale, with year-round average temperatures sitting at 78 degrees, the Orlando resort is only 1.5 miles from Walt Disney World® and just minutes from SeaWorld® Orlando, Discovery Cove®, Aquatica™, LEGOLAND® and Universal Studios® Orlando.

Host Hotels & Resorts Inc. is an S&P 500 and Fortune 500 company. The largest lodging real estate investment trust and one of the largest owners of luxury and upper-upscale hotels, the company currently owns 94 properties in the United States and 14 properties internationally, totaling approximately 58,000 rooms. The company also holds non-controlling interests in five joint ventures, including one in Europe that owns 10 hotels with approximately 3,900 rooms and one in Asia that has interests in three hotels in India. Guided by a disciplined approach to capital allocation and aggressive asset management, the company partners with premium and independent brands in the operation of properties in over 50 major markets worldwide. For information, visit www.hosthotels.com.