In 2020, U.S. hotels suffered the worst year of operating performance since CBRE began tracking profitability in 1938.  During the year, the average hotel in CBRE’s monthly survey of U.S. operating performance experienced a 78 percent decline in Gross Operating Profits (GOP) and achieve the lowest GOP margin (19.7%) over the past 82 years.  While hotels may have earned enough revenues to cover their direct operating expenses, it is likely that the average hotel did not generate any cash from operations to cover their debt service.

To track operating performance during 2020, CBRE collected monthly operating statements from a sample of 2,000 hotels across the country.  The sample consists of a diverse set of hotels based on property type and chain scale.  Our analyses of year-to-date performance was based solely on hotels operated throughout the year.

While the overall news is grim, during the year we did observe the strong efforts of U.S. hotel operators to minimize losses.  Operational decisions that led to enhanced revenue yield and efficient cost controls contributed to muting declines in profits.

The 2020 annual total operating revenue for the CBRE sample declined by 57.6 percent.  This resulted in profit declines of 78.0 percent at the GOP level, and losses in earnings before interest, taxes, depreciation and amortization (EBITDA) of 107.6 percent.

In general, the declines in profits occurred in a reverse linear relationship to pricing.  Hotels operating in the luxury and upper-upscale chain scale segments suffered the greatest falloff in EBITDA (over 100%), while midscale and economy properties saw EBITDA profits decline by a relatively limited 71.6 percent.

The market orientation of the hotel appeared to influence profit performance by property type. Because of the lack of group demand in 2020, convention hotels experienced the greatest declines in EBITDA (-149.0%).  Conversely, the well documented popularity of drive-to leisure destinations helped buoy the performance of the resort hotels in the CBRE sample.  EBITDA for these properties declined by just 78.3 percent.  Extended-stay hotels benefited from a base of residential guests, vacationers desiring a kitchen, and temporarily relocated medical-related demand.  This helped to lessen their decline in EBITDA to 68.0 percent.  It should also be noted that the resort hotels in the CBRE sample had a relatively high average daily rate (ADR) of $221.41, while the ADR for the extended-stay sample was $102.38.

During 2020 the four major revenue sources were down from 2019 on a dollar-per-available-room basis.  However, when observing revenue based on a dollar-per-occupied-room basis we see that other operated department revenue and miscellaneous income have increased.  This implies that those guests who stayed in a hotel during 2020 spent more on ancillary revenue sources such as golf, spa and retail than they did in 2019.  Further, hotels benefited from collecting attrition and cancellation fees during the year.

While revenues declined during 2020, so too did operating expenses.  In conjunction with the 44.0 percent decline in occupancy for the sample and concurrent 57.6 percent decrease in revenue, total expenses fell by 41.6 percent.  As expected, the greatest declines in expenses occurred in the operated departments and management fees.  A significant portion of operated department expenses are variable in nature, and thus declined because of the decrease in occupancy.  Of greater importance is the fact that operated department expenses fell on a dollar-per-occupied-room basis, indicating cuts into fixed costs, and reductions in services and amenities.  Management fees are mostly a function of revenue and profits, and therefore declined in a commensurate fashion.

Among the non-operating expenses, rent payments declined by 28.0 percent for the year.  Rent payments are frequently charged as a percent of revenue.  Further, the inability to generate cash flows resulted in some owners unable to make their rent payments.

Unfortunately for hotel owners, property taxes rose in 2020.  We expect these taxes to be appealed in 2021 as property values decline.  Insurance costs rose by a significant 14.1 percent in 2020 and should rise again in 2021 as a reaction to the western regional fires, and hurricanes that occurred along the Gulf and Atlantic coasts.

Looking forward, variable expenses associated with occupancy and revenue will rise as market conditions improve.  The question is whether the expense savings resulting from reductions in services and amenities during 2020 can be sustained.  Several of the cost controls in 2020 were the consequence of leniency in brand standards.  This resulted in reduced levels of complimentary food and beverage, guest room supplies, and housekeeping.

Going forward, brands, owners and operators will have to balance the need to maximize operating efficiencies and profits with the desires of guests.  As occupancy levels rise, operators will want to raise room rates.  However, to justify rate increases, it can be assumed the services and amenities cut in 2020 might have to be reinstated.  This will be especially challenging in the higher-priced segments that are expected to lag in recovery due to the absence of executive corporate travel and group demand.  More moderate-priced hotels, with existing lower-levels of services and amenities, should find it easier to return to pre-COVID operating levels. 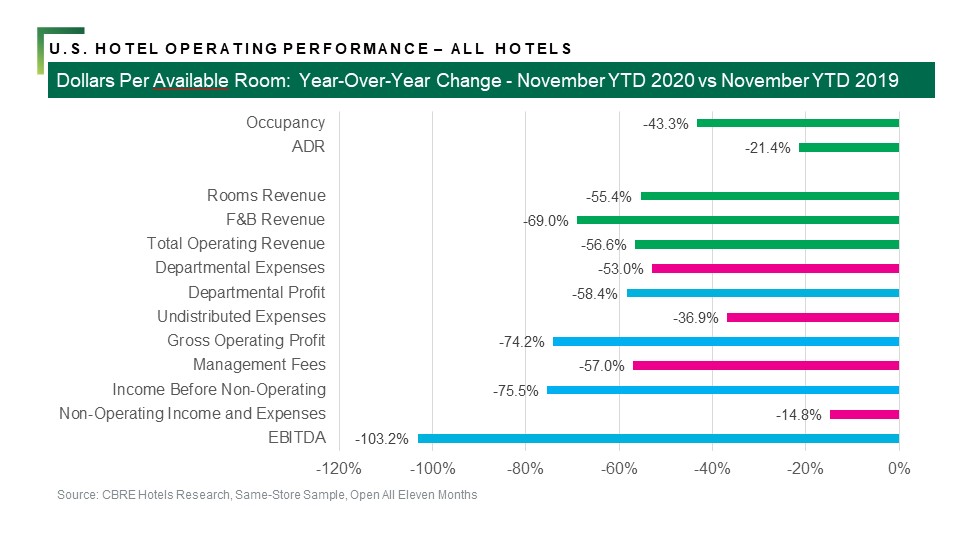 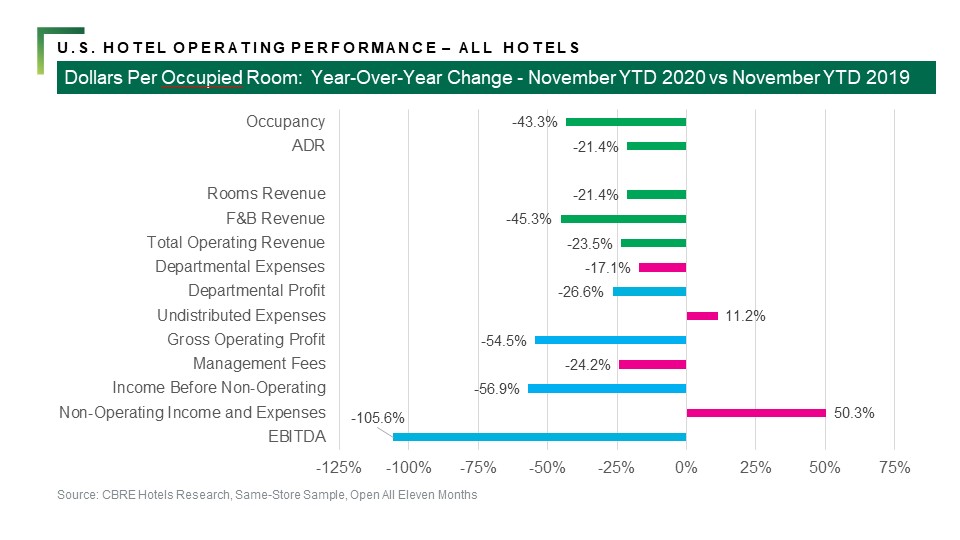 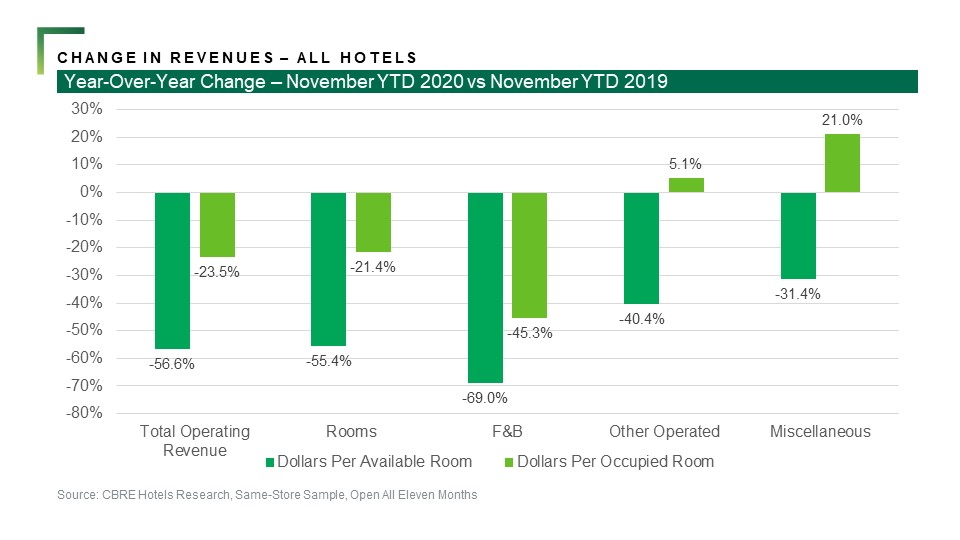 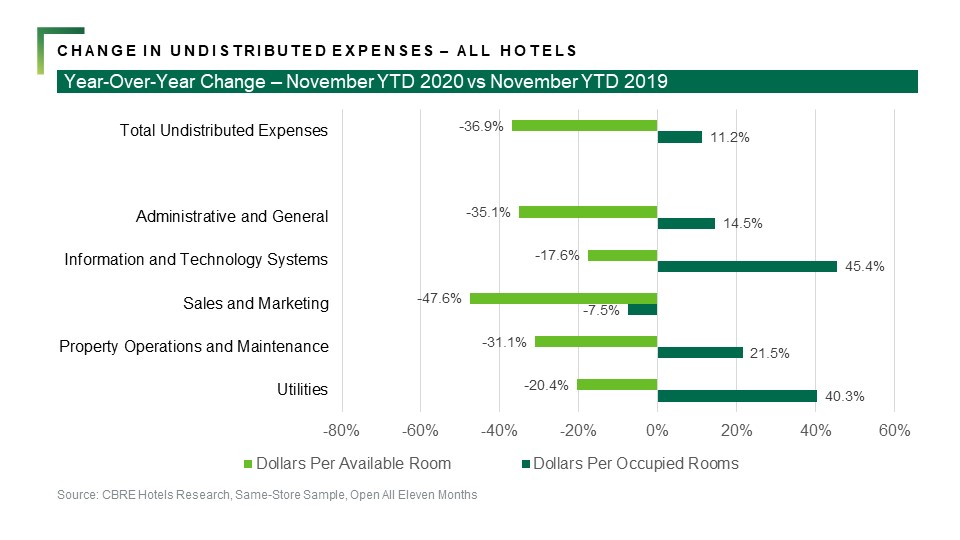 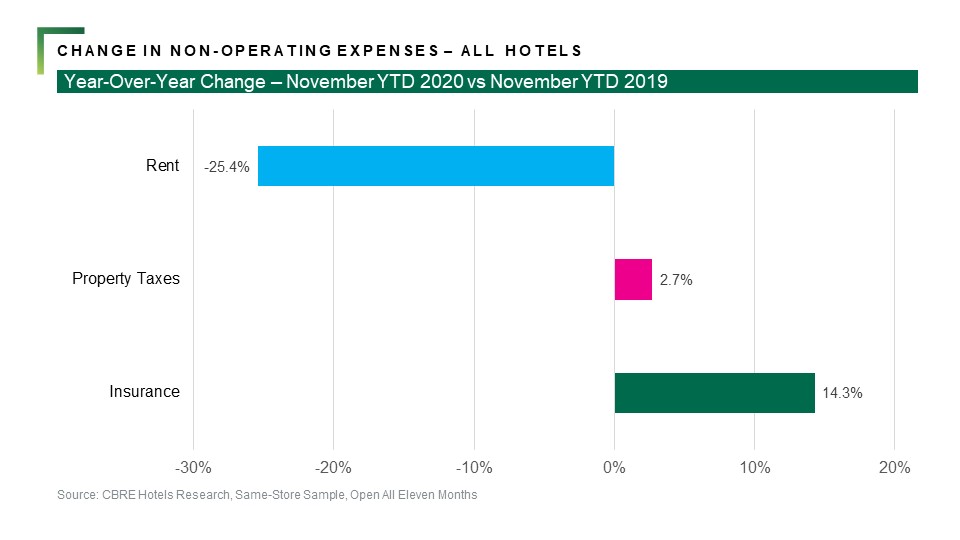 Robert Mandelbaum is Director of Research Information Services for CBRE Hotels Research.  CBRE forecast and financial benchmarking reports can be found at pip.cbrehotels.com.