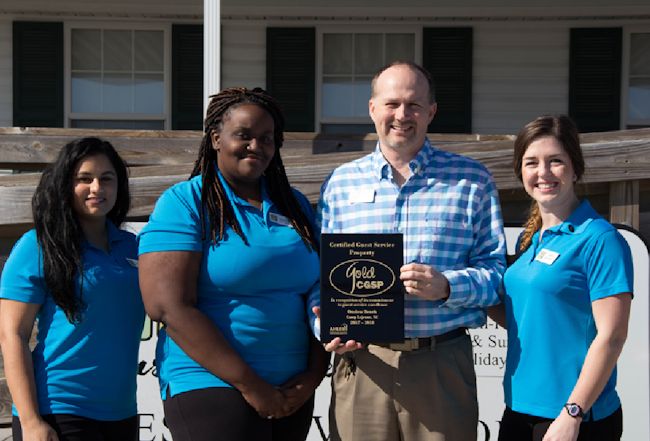 Orlando, Florida, April 2017—Two Marine Corps lodging properties in the Camp Lejeune-New River area of North Carolina have earned the Certified Guest Service Property designation from the American Hotel & Lodging Educational Institute (AHLEI), the first from the Marine Corps branch of the military to do so. Onslow Beach and Inns of the Corps staff members completed AHLEI’s Guest Service Gold® training and earned the Certified Guest Service Professional (CGSP®) designation to qualify their facilities for the property-level certification.

Employees from both properties attended in-person training sessions, which provided opportunities for constructive dialogue about guest service and concluded with the development of concrete action plans for each staff member.

“The training focused on being proactive rather than reactive, which is important,” said Lowery. “Our goal is a 100 percent positive guest experience; we’re not there yet, but I can see that each of our employees is committed to doing their part to deliver first-class service for our guests.”

Camp Lejeune in the country’s largest Marine Corps installation. The Inns of the Corps hotel serves about 60,000 guests annually, while the Onslow Beach property serves more than 100,000 guests, representing Marine Corps personnel and their families.

Established in 1953 as the nonprofit education and training arm of the American Hotel & Lodging Association (AH&LA), AHLEI’s mission is to continue being the preferred provider to the lodging industry, hospitality schools, and related hospitality industries by developing and providing quality resources to educate, develop, and certify hospitality professionals worldwide.