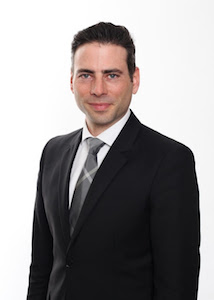 Thomas Willms, CEO, Deutsche Hospitality, is happy about the new appointment: “Since its opening two years ago, the Steigenberger Hotel in Munich has acquired an excellent market position within a very short period of time. Oliver Schäfer has all the qualifications needed to expand this position even further.” The Steigenberger Hotel Munich welcomes guests since December 2017.

Oliver Schäfer’s previous positions include the Hotel Schloss Fuschl, now part of the Luxury Collection, the Hotel Waldhuus in Davos and the Turnberry Isle, Autograph Collection, in Florida. The 43-year-old took up his first general manager position in 2005 at the Four Points by Sheraton Olympic Park in Munich. In 2015, he successfully opened the Aloft Hotel in Munich.

The Steigenberger Hotel Munich includes 292 rooms and a conference area of over 1200 square meters. The Valentinum restaurant with regional and international specialties, a 300 square meter wellness area, a bar with fireplace and cigar lounge, a film library and the “Bierkristall”, with more than 50 different types of beer complete the Steigenberger Hotel Munich amenities.

About Steigenberger Hotels and Resorts

Steigenberger Hotels and Resorts is a Deutsche Hospitality brand. It represents the epitome of luxury and perfect hospitality. Visitors can choose from historic hotels rich in tradition, lively city residences and health and beauty oases at the very heart of nature. The portfolio includes 60 hotels in eleven countries in Europe, Asia and Africa. Deutsche Hospitality operates four further brands. MAXX by Steigenberger is a new and charismatic concept which places the focus on the essential in accordance with its motto “MAXXimize your stay”. Jaz in the City branded hotels reflect metropolitan lifestyle and draw upon the local music and cultural scene. IntercityHotel offers 40 upper modern upper mid-scale urban hotels, all of which are located within easy walking distance of railway stations or airports, whilst Zleep Hotels provide quality and design at an affordable price in Denmark and Sweden.