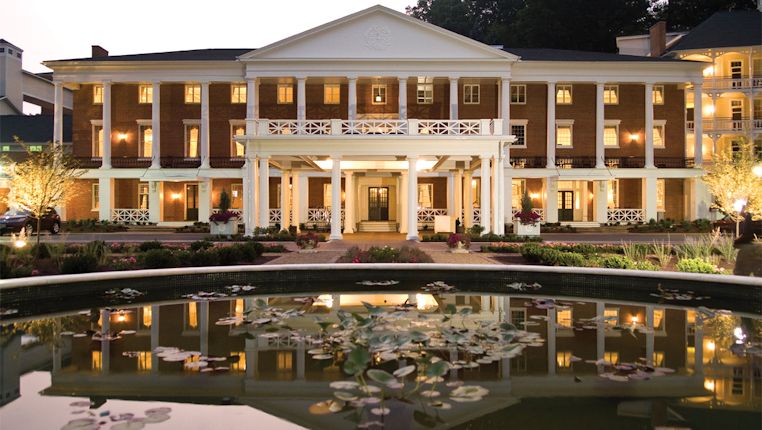 Few properties can boast the historic significance of Bedford Springs Resort, located in the Allegheny Mountains of south-central Pennsylvania. For more than 200 years, the eight mineral springs located on the resort’s property served as an important gathering place. Eventually, the resort would be the site of many significant moments in American history, hosting a long list of celebrities, wealthy clientele, corporate magnates and dignitaries from around the world. To date, the resort has hosted 10 U.S. Presidents, seven of whom visited during their presidency.

The Native Americans first used the mineral springs for their curative properties, and in the late 1700s they shared the powers of the springs with a doctor named John Anderson. In 1796, Dr. Anderson purchased the 2,200-acre property on which the resort now stands. He built a home on the property and as word spread of these unique waters, visitors arrived from around the globe to experience them. He housed the guests in tents and offered custom prescriptions based upon their needs. Dr. Anderson and Dr. William Watson prescribed a regimen of diet, exercise and many pints of the spring water.

The Bedford Springs Resort is truly an American original. With its growing list of wealthy clientele, it gained a reputation as a luxury destination and was proclaimed as the Most Popular Resort in the United States. Bedford Springs became home to one of first golf courses in America, originally designed by Spencer Oldham (and later redesigned by A.W. Tillinghast and then the renowned Donald Ross). In 1905, the resort opened one of the nation’s first indoor pools fed by the property’s spring waters. With its alluring surroundings and high-profile guest list, Bedford Springs’ role in history was already in the making.

As more and more guests came west to “take the waters”, Dr. Anderson decided to build a hotel. The Stone Inn was built in 1806 from stone quarried atop the mountain located adjacent to The Springs and carried down the mountain by oxen. Guests making the trek to the hotel encountered a rugged journey. They often arrived by train in Cumberland, and then made the 21-mile trip through the Cumberland Valley to Bedford Springs.

The popularity and reputation of Dr. Anderson’s treatments grew throughout the early 19th Century and by 1809, there were three buildings on the site, including The Stone House, Crockford and a precursor to the Evitt House. According to a travelogue by Joshua Galpin in 1809, these buildings included a “large frame lodging house and several smaller ones for families warm and cold baths and a billiard room.” In 1824, Bedford Springs was hailed as the “Montpelier of America” in a column in the July edition of the National Gazette & Library Register, which noted with praise the waters, accommodations, activities, food and wine.

The popularity of the resort also benefited from the emphasis on outdoor life in the mid-nineteenth century as east coast American cities became increasingly industrialized and polluted. The establishment of stops in Bedford for the B&O and Pennsylvania Railroads beginning in 1872, provided easy accessibility from cities such as Washington, D.C., Philadelphia, and New York.

Bedford Springs became an attraction for politicians and, in addition to serving as the “Summer White House” for President James Buchanan from 1857 to 1861, also served as a getaway and meeting place for other presidents such as William Henry Harrison, James K. Polk and Zachary Taylor, as well as a multitude of senators and congressmen and their families. The first transatlantic calls sent from England to the United States was received by President Buchanan at the hotel on August 12, 1858.

In 1905, a major renovation of the complex included a monumental double-decked colonnade, which connected the hotel’s main dining room to a columned pavilion at the Magnesia Springs as well as a new building with a spring-fed indoor pool, reportedly the first such facility in the United States. In the 1930s, the hotel’s resident physician, Dr. William E. Fitch, established the “Bedford Cure,” a health regimen that required a three-week stay at the resort, which operated successfully throughout the 1930s and 1940s. During World War II, the hotel and its grounds were used by U.S. Navy as the Naval Training School and then later as a detention center for interned Japanese diplomats.

The decade of the 1950s saw numerous improvements and renovations to the property, including the installation of modern environmental controls and sprinkler systems. Bedford Springs was also open year-round for the first time in 1950. However, tastes in leisure travel had changed significantly over the years and the property eventually shut its doors in 1986. Two years later, a flash flood severely damaged several buildings at Bedford Springs and the resort fell into disrepair. Even so, the site was placed on the National Register of Historic Places in 1984.

*excerpted from my book “Built To Last: 100+ Year-Old Hotels East of the Mississippi”

To purchase a copy, visit my website (www.stanleyturkel.com) and click on the book title (Hotel Mavens: Lucius M. Boomer, George C. Boldt and Oscar of the Waldorf). You can then order a Softcover for $19.95 or a dust jacket Hardcover for $28.95 or an E-Book for $3.99 directly from the publisher (AuthorHouse).

Stanley Turkel is a recognized consultant in the hotel industry. He operates his hotel consulting practice serving as an expert witness in hotel-related cases and providing asset management and hotel franchising consultation.Prior to forming his hotel consulting firm, Turkel was the Product Line Manager for worldwide Hotel/Motel Operations at the International Telephone & Telegraph Co. overseeing the Sheraton Corporation of America. Before joining IT&T, he was the Resident Manager of the Americana Hotel (1842 Rooms), General Manager of the Drake Hotel (680 Rooms) and General Manager of the Summit Hotel (762 Rooms), all in New York City.
He serves as a Friend of the Tisch Center and lectures at the NYU Tisch Center for Hospitality and Tourism. He is certified as a Master Hotel Supplier Emeritus by the Educational Institute of the American Hotel and Lodging Association. He served for eleven years as Chairman of the Board of the Trustees of the City Club of New York and is now the Honorary Chairman.
Stanley Turkel is one of the most widely-published authors in the hospitality field. More than 275 articles on various hotel subjects have been posted in hotel magazines and on the Hotel-Online, BlueMauMau, HotelNewsResource and eTurboNews websites. Two of his hotel books have been promoted, distributed and sold by the American Hotel & Lodging Educational Institute ("Great American Hoteliers: Pioneers of the Hotel Industry" and "Built To Last: 100+ Year-Old Hotels East of the Mississippi"). A third hotel book ("Built To Last: 100+ Year-Old Hotels in New York") was called "passionate and informative" by the New York Times. All of these books can be ordered from the publisher by visiting www.stanleyturkel.com.
Turkel was designated as the 2014 Historian of the Year by Historic Hotels of America, the official program of the National Trust for Historic Preservation. This award is presented to an individual for making a unique contribution in the research and presentation of history and whose work has encouraged a wide discussion, greater understanding and enthusiasm for American History.