Nobody Asked Me, But… No. 128 Hotel History: Hotel Dixie/Carter; Quote of the Month

Home/Nobody Asked Me, But… No. 128 Hotel History: Hotel Dixie/Carter; Quote of the Month

Nobody Asked Me, But… No. 128 Hotel History: Hotel Dixie/Carter; Quote of the Month 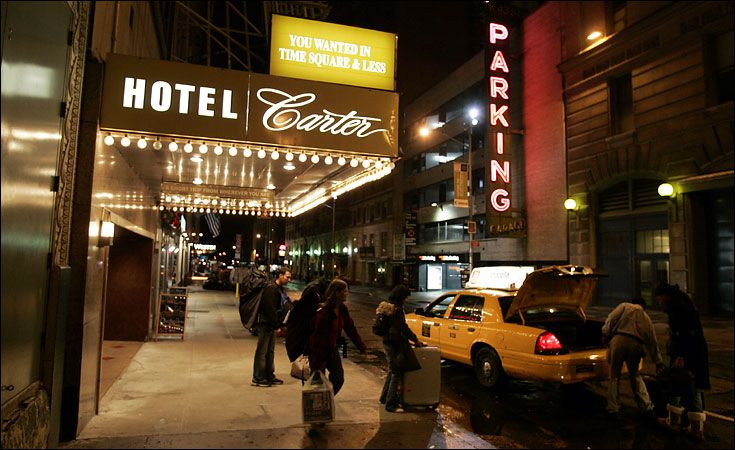 Truong Dinh Tran led a mostly uneventful life, unless you count spending two years in a North Vietnamese prison, swimming his way to South Vietnam, building a fortune in wartime, fleeing to the United States with a suitcase full of cash and another full of gold, installing himself and his four paramours and their children in a single-room-occupancy hotel on Manhattan’s West Side, becoming a subject of the biggest federal seizure of property related to drug charges in American history, and then donating $2 million to the American Red Cross Disaster Relief Fund after Sept. 11. When he died, in 2012, Mr. Tran left a fortune valued at $100 million, at least 16 children by five women, one self-described wife, and no last will and testament.

Among his real estate properties in New York was the Hotel Carter which was voted the “dirtiest hotel in America” for three consecutive years on the TripAdvisor website.

The Hotel Carter was constructed in 1930 as the Hotel Dixie by Percy and Harry Uris who were active hotel developers in New York City. The Dixie was built as a bread and butter, no-frills hotel with small-sized guestrooms. It had no pretensions to luxury and was created to provide inexpensive rooms in the Times Square area. It included a bus terminal in the basement just below the street floor. The terminal consisted of a large waiting room with an information booth, ticket counters, station offices, baggage storage, checkrooms, lunch counter and automobile parking spaces. Ramps for buses led to and from Forty-third Street. A thirty-five foot turntable served to maneuver the buses into their allotted loading stalls and to reverse them when ready to leave.

The bus terminal operated for twenty-seven years before it closed in July 1957. In its heyday, the Central Union Bus Terminal (later the Short Line Terminal) handled 350 buses daily during peak summer seasons. It had the largest enclosed loading space of any bus terminal in New York with entrances on 42nd Street and 43rd Street. It brought traffic, noise and carbon monoxide to the hotel’s entrance, lobby and guestrooms. It finally closed because of an inability to compete with the new Port Authority bus terminal at 40th Street and Eighth Avenue.

The Hotel Dixie was originally conceived, designed and built as an economy/budget hotel from its inception. Its small guestrooms reveal the concept of its approach to the Times Square marketplace. It was designed to compete with low-cost boarding and rooming houses. At best, it could be described as a YMCA-like hotel with private bathrooms.

The Uris brothers lost the Hotel Dixie to foreclosure by the Bowery Savings Bank in 1932. The management of the hotel was taken over by the Southworth Management Company. In 1942, the Hotel Dixie was renamed the Hotel Carter when the Carter Hotel chain acquired the hotel and bus terminal. This was the sixth hotel in the Carter group and its second in New York City.

George R. Sanders of Brooklyn, New York jumped from the 14th floor of the hotel on March 13, 1931. His body crashed through the roof of a single story restaurant adjacent to the Dixie. He landed at the feet of two customers of the diner and the night manager. He left a note in his room identifying himself and citing mental depression as the reason for killing himself.

Olga Kibrick, daughter of a wealthy Brockton, Massachusetts insurance executive, committed suicide by leaping from the roof of the hotel to a third floor extension on the west side of the building, in October 1931. She had been staying on the 21st floor. Police found a Brockton Musical Chorus card in her room, along with fifteen cents in change, her gloves, and a pocketbook.

In September 1941, a young man from Wayne, Nebraska burned to death after falling asleep while smoking on the 12th floor of the hotel. The story made headlines when it was discovered that shortly after his arrival, Frederick S. Berry Jr. received a letter from his father telling of a premonition his mother had of something dire happening to him. Berry was discovered by hotel employees seated in a chair, with the clothing on his upper body burned completely. He died after being taken to Roosevelt Hospital.

Darrell Bossett, an unemployed laborer, was arrested after scuffling with police in a fourth floor room of the Carter Hotel, in December 1980. He was charged with first-degree murder and second-degree murder and possession of a weapon, in the shooting of New York City Police Officer Gabriel Vitale.

An infant, twenty-five days old, was beaten to death at the hotel in November 1983. His father, Jack Joaquin Correa, a hotel resident, was charged with the murder and child abuse.

As of December 1991, the Penthouse Hostel operated with a lease on the 23rd and 24th floors of the Hotel Carter. The hostel sign was barely visible beneath the Carter marquee. Lodgings there provided an alternative to the American Youth Hostels organization.

Vietnamese businessman Truong Dinh Tran purchased the Hotel Carter in October 1977. Mr. Tran was the principal owner of the Vioshipco Line, the largest shipping company in South Vietnam in the 1970s. Mr. Tran had substantial contracts with the United States military to haul cargo and to aid in the evacuation of thousands of South Vietnamese civilians and military personnel, came to the U.S. in 1975.

Mr. Tran began his hotel business with the acquisition of the Hotel Opera on the Upper West Side in Manhattan, then the Hotel Carter and Hotel Kenmore in midtown Manhattan and the Hotel Lafayette in Buffalo, New York.

Mr. Tran’s idiosyncratic management of the Hotel Carter deviated from the customary hotel operations in at least four significant ways:

1. Guestrooms were cleaned only upon checkout. One consequence of this practice was the reduced use of labor, sheets, pillowcases, towels, soap, water and other cleaning materials. It should be noted that today many hotels ask guests to forego daily linen replacements.

2. Guest amenities were restricted to necessary items only. This practice enabled the Hotel Carter management to price its rooms at a bargain-basement rate below $100 per night.

4. The actual number of guestrooms available for daily rental was 546 rooms. The remaining rooms in the Hotel Carter were occupied by Mr. Tran’s extended family.

2. Quote of the Month

“Smash all functional barriers. Unfettered contact among people from different disciplines is magic.”