Nobody Asked Me, But… No. 184: Hotel History: The Beverly Hills Hotel

Home/Nobody Asked Me, But… No. 184: Hotel History: The Beverly Hills Hotel

Nobody Asked Me, But… No. 184: Hotel History: The Beverly Hills Hotel 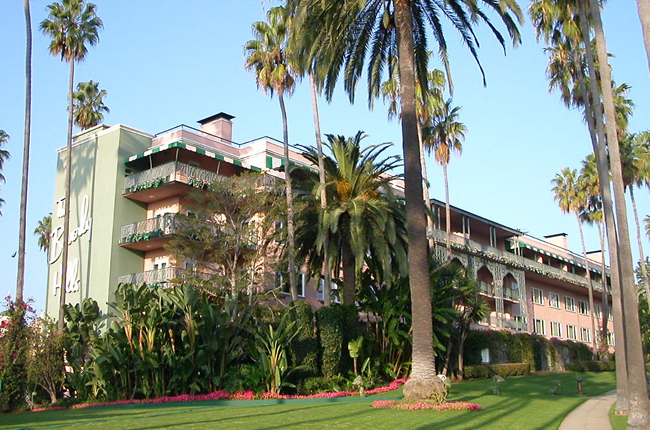 The Beverly Hills Hotel is one of the most famous hotels in the world. It was developed in 1912 by Burton Green, President of the Rodeo Land and Water Company. He hired Margaret J. Anderson and her son, Stanley S. Anderson to manage the new Mission Revival-style hotel on 12 acres which he named Beverly Farms after his home in Massachusetts. Green persuaded Margaret Anderson to leave the well-established Hollywood Hotel by offering her not only the management and a lease but also an option to buy at a price that was considered a giveaway. The Beverly Hills Hotel was designed by architect Elmer Grey (1872-1963) who was a pioneer in the development of the new American architecture in the early 20th century with a focus on Spanish mission style. At some point, architect Grey decided that instead of white stucco, the hotel would be painted a brilliant, startling, signature pink and it became known as the “Pink Palace”. By 1914, Hollywood luminaries such as Charlie Chaplin, Mary Pickford, Douglas Fairbanks, Gloria Swanson, Buster Keaton, Rudolph Valentino and Will Rogers had purchased homes in the newly-named city of Beverly Hills.

In 1915, the Andersons donated a portion of the hotel’s original grounds to the city of Beverly Hills to create the community’s first public park, now known as Will Rogers Memorial Park. In 1920, Mrs. Anderson exercised her option to buy the hotel and her son Stanley assumed more and more of the daily operations with great success.

From 1928 to 1932, the hotel was owned by Hugh Leighton of the Van Noys Railway News and Hotel Company which had to close the hotel in 1933 because of the Great Depression. In 1940, when the Sand and Pool Club was created with bright white sand imported from Arizona, the hotel reopened and attracted such Hollywood stars as Fred Astaire, Cesar Romero and Carole Lombard. Marlene Dietrich brought about a change in policy in the Polo Lounge which had previously made it compulsory for women to wear skirts which she refused to do. Elizabeth Taylor’s father had an art gallery in the hotel’s lower level.

In 1941, Hernando Courtright, a vice president of the Bank of America, purchased the hotel with Irene Dunn, Loretta Young and Harry Warner. Courtright renamed the El Jardin as the Polo Lounge in honor of a celebrity group of polo players who toasted their victories at the Lounge.

Amid twelve acres of lush gardens, banana plants, bougainvillea and hibiscus, the hotel’s twenty-one bungalows are bigger than many houses and provide 24-hour room service and dog-walking service. Over the years, Hollywood stars and other guests have learned that the bungalows make an ideal spot for such random activities as:

That the hotel could absorb the demands of its eccentric guests was due in part to its widespread layout – sixteen acres, 265 guestrooms and twenty-one bungalows.

The hotel underwent a major facelift in 1947 and reopened with the Crystal Room and the Lanai Restaurant, later called the Coterie. In 1949, architect Paul Revere Williams designed the new Crescent Wing as well as revisions to the Polo Lounge, Fountain Coffee Shop and the lobby.

On January 23, 1954, the Los Angeles Times reported: “Hernando Courtright, president and general manager of the Beverly Hills Hotel Corporation, announced yesterday that Ben L. Silberstein, Detroit investor….has acquired substantial stock position in the hotel company….Courtright will continue to operate the Beverly Hills Hotel… and all policies that have brought the hotel international recognition will be continued.” Guests included the Duke and Duchess of Windsor, Princess Margaret and Lord Snowden, King Albert of Begium, the Crown Prince of Monaco, Grace Kelly, John Wayne and Henry Fonda.

The Polo Lounge became a favorite drinking hangout for Frank Sinatra, Dean Martin and the Rat Pack. In the late 1950s, Marilyn Monroe and Yves Montand occupied two bungalows while filming George Cukor’s Let’s Make Love. In 1963, the comedy Who’s Been Sleeping in My Bed starring Dean Martin, Elizabeth Montgomery, Carol Burnett and Jill St. John was filmed at the hotel. In January 1976, Peter Finch died of a heart attack in the hotel lobby. Two months later, he was posthumously awarded the Academy Award for Best Actor for his role as Howard Beale in the film Network. His co-star Faye Dunaway also stayed at the Beverly Hills Hotel after winning the Academy Award for Best Actress in the same film. Neil Simon, a frequent guest, filmed California Suite at the hotel.

When Ben Silberstein died in 1979 at age seventy-seven, ownership passed to his two daughters Muriel Slatkin and Seena Boesky, wife of stock trader Ivan Boesky. In 1986, the hotel was sold to Denver oilman Martin Davis for $136 million. A year later, Davis sold the hotel to the Sultan of Brunei for $185 million. On December 30, 1992 the hotel closed for a complete renovation which lasted two and a half years with its reopening on June 3, 1995. Howard Hirsch, a senior partner in Hirsch/Bedner, one of the leading hotel interior design firms, described the Beverly Hills Hotel: “The outside of the hotel is California Mission, and the inside is late Art Deco. There’s no common theme. But this is Hollywood. The interior is a stage set, it’s theater and we’ve upgraded that. Hotel guests are actors and the audience at the same time. It’s a people-watching hotel. On the one hand, some people don’t want to be seen, on the other hand, staying at the hotel is very important.”

The hotel is included in the Dorchester Collection, a group of nine high-end hotels The Dorchester, London; LeMeurice, Paris; Le Richemond, Geneva; Hotel Principe di Savoia, Milan; Coworth Park, Ascot, UK; 45 Park Lane, London; Hotel Bel-Air, Los Angeles. Incredibly, the Sultan of Brunei announced in October 2013 that he was adopting the legal system of the harsh and ancient Islamic Sharia penal code which includes stoning gays and adulterers, public flogging of women who have abortions, and amputation of limbs. It was reported that dozens of groups cancelled more than $2 million worth of events and the damage had spread to the Sultan’s other hotels. The boycott went viral around the world.

The Sultan And the Salad

I used to love going to the Beverly Hills Hotel on Sunset Boulevard, wandering its banana-leaf-patterned halls and communing with its glamorous ghosts and legends.

Elizabeth Taylor and Richard Burton, with their regular breakfast order to their bungalow of two bottles of vodka and another pair for lunch. Esther Williams and Joan Crawford in the pool. Howard Hughes, pacing around his darkened suite wearing Kleenex boxes for shoes and ordering sandwiches in the middle of the night. The Rat Pack with its whiskey and broads. Gina Lollobrigida and Marilyn Monroe lounging poolside, titillating cabana boys. Nancy Reagan, dishing at lunch.

But then the Pink Palace fell out of favor and took on a ghostly hue of its own.

In 2014, Jeffrey Katzenberg, Jay Leno, Elton John, Ellen DeGeneres and others called for a boycott of the hotel after its owner, the sultan of Brunei, implemented Shariah law in his small oily kingdom in the South China Sea, making homosexuality and adultery punishable by stoning.

On May 6, 2014 the Beverly Hills City Council held a special meeting to pass a unanimous resolution condemning the government of Brunei for Sharia law and urging the Sultan to sell their hotels and other Beverly Hills properties. Christopher Cowdray, CEO of the Dorchester Collection responded to the constant barrage of business leaders eager to buy the iconic hotel: “No. We will weather the storm and we’ll come out on the other side even stronger.”