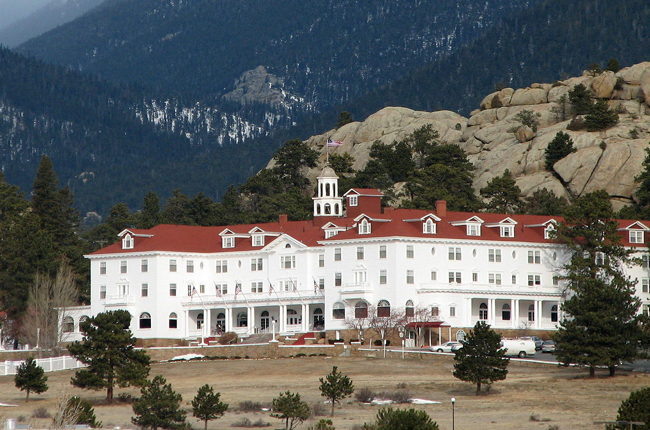 A story in the New York Times on September 4, 2015, “Hotel That Inspired ‘The Shining’ Builds On Its Eerie Appeal” focused on the Stanley Hotel and Stephen King’s novel that went on to become Stanley Kubrick’s 1980 cult film classic. For years, operators of the Stanley Hotel have used “The Shining” and its paranormal plot as pure marketing gold.

But there is a more accurate history of the majestic Stanley Hotel which is listed on the National Register of Historic Places. The hotel is named after its builder, Freelan Oscar Stanley (1849-1940) and his twin brother Francis Edgar Stanley (1849-1918) who were born in Kingfield, Maine. Although Freelan began his career as a teacher, in 1881 he contracted tuberculosis and resolved to adopt a more healthful regimen. From 1885 to 1904, he was co-owner with his brother of the Stanley Dry Plate company which they later sold to Eastman Kodak.

The twin brothers then founded an early version of the Stanley Motor Carriage Company. They produced their first car in 1897 and sold 200 cars in 1898 and 1899, more than any other U.S. manufacturer. In 1899, Freelan and his wife Flora drove one of their cars to the top of Mount Washington in New Hampshire, the highest peak in the northeastern United States. The ascent took more than two hours and was the first time an automobile had climbed the 7.6 miles-long Mount Washington Carriage Road. The descent was accomplished by putting the engine in low gear and braking extensively. The Stanley twins later sold the rights to this early design to the Locomobile Company and, in 1902, formed the Stanley Motor Carriage Company.

Early Stanley cars had light wooden bodies mounted on tubular steel frames by means of full-eliptic springs. Steam was generated in a vertical fire-tube boiler mounted beneath the seat with a gasoline (and later, kerosene) burner underneath. The boilers were safer than reputed; there has never been a documented case of a Stanley boiler exploding in use. Later, the Stanley brothers developed a new automobile model with a twin cylinder engine geared directly to the axle. These later models had aluminum coachwork that resembled internal combustion cars. A Stanley Steamer (piloted by Fred Marriott-no relation to the Marriott Hotels) set the world record for the fastest mile by an automobile in 1906 (127 mph). This record was not broken by an automobile until 1911. The record for steam-powered automobiles was not broken until 2009. During 1910, the fuel efficiency and power of internal combustion engines improved dramatically which led to the rise of the gasoline-powered automobile. The Stanley Company advertised “Power – Correctly Generated, Correctly Controlled, Correctly Applied to the Rear Axle” but to little effect.

In 1918, after F.E. Stanley’s accidental death, F.O. Stanley sold the automobile company to Prescott Warren. In subsequent years, widespread use of electric starters in internal combustion cars (which eliminated the need for risky hand cranking) eroded the remaining technological advantages of the steam car. The Stanley company was shut down permanently in 1924. F.O. Stanley was also a maker of concert-quality violins and a pioneer of reinforced concrete construction.

In 1903, Stanley came to Estes Park, Colorado for his health. He suffered from tuberculosis and came West where his doctor arranged for Stanley and his wife, Flora, to stay in a cabin in Estes Park for the summer. Immediately, they fell in love with the area and Stanley’s health began to improve dramatically. Impressed by the beauty of the valley and grateful for the improvement in his health, Stanley decided to invest his money and his future there. After spending the summer in a cabin, Flora wanted a home like the one she had left in Maine. Their home was built about one-half mile west of where the Stanley Hotel would later be constructed. Today the house is a private residence.

In 1907, construction started on the Stanley Hotel with steel support beams and timber cut from an earlier Bear Lake fire which may account for the faint smell of wood smoke which is evident on summer days. Equipped with running water, electricity, and telephones, the only amenity the hotel lacked was heat, as the hotel was designed as a summer resort. In 1909, Stanley opened the elegant Stanley Hotel, a classic hostelry exemplifying the golden age of touring.

He used his engineering and automotive background to redesign a truck into the Stanley Mountain Wagon, the first “motorbus” which was used to transport guests from nearby rail stations to the hotel. By 1940, Stanley had developed the town of Estes Park and was primarily responsible for the creation and designation of the Rocky Mountain National Park.

The classic Colonial Revival Stanley Hotel with its Georgian architectural style, soaring ceilings and understated elegance offered panoramic views of Lake Estes, the Rockies and Long’s Peak. The buildings were designed by Denver architect T. Robert Wieger with help from Freelan Stanley who fancied himself an architect. The main hotel building was built to accommodate the activities popular with the upper middle class including a music room with large windows and classical plaster-work designed for letter-writing during the day and chamber music at night. In addition, the smoking lounge and adjoining billiard room with a granite fireplace were designed for use by male guests.

A separate concert hall was built in 1909 with the assistance of architect Henry Rogers as a gift for Flora Stanley who was an avid pianist despite her failing eyesight. The interior somewhat resembles that of the Boston Symphony Hall designed by McKim, Mead & White.

A smaller hotel, the Stanley Manor, was built between the main structure and the concert hall was intended as a year-round, heated winter resort. Today, it is called The Lodge and serves as a bed-and-breakfast facility.

The hotel and its surrounding structures are listed on the National Register of Historic Places. The Stanley Hotel shows the uncut R-rated version of Stanley Kubrick’s movie The Shining on a continuous loop on guest room televisions. As of June 2015, the hotel constructed a miniature maze inspired by the film’s climatic scenes. The maze design was created by architect Mairim Dallaryan Standing, chosen from over 300 entries in an International Design Competition held by the Stanley Hotel on February 2, 2015.