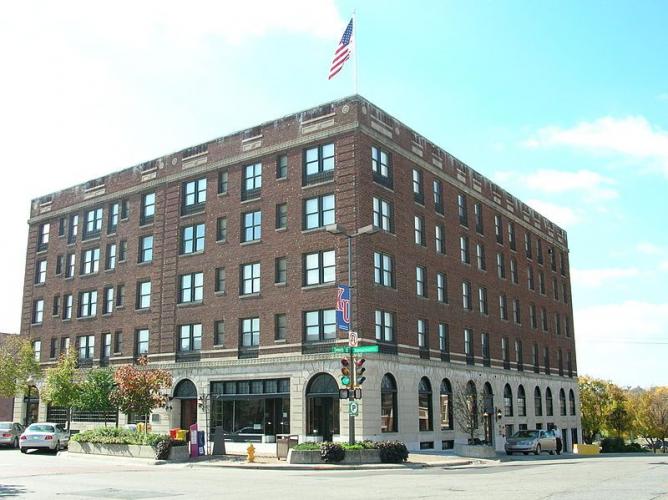 The following historical marker was erected on April 4, 1940 by the Lawrence Rotary Club:

“This marks the site of the Free State Hotel erected in 1855 by the New England Emigrant Aid Society. Destroyed by Sheriff Jones and his posse May 21, 1856, and rebuilt by Col. Schaler W. Eldridge. Quantrill and his raiders destroyed Lawrence August 21, 1863, burned the hotel and massacred the citizens. Col. Eldridge restored the hotel which stood until 1926 when it was rebuilt by W.G. Hutson.”

W.G. “Billy” Hutson was the grandfather of the well-known hotelier Michael Getto (The Hills Hotel, Laguna Hills, California). Billy Hutson bought the Eldridge House in 1906 and ran it until 1926 when the present hotel was built. Mike Getto, Sr. managed the hotel from 1942 until 1958. He was an All-American tackle at the University of Pittsburgh who played in the 1929 Rose Bowl. He coached at Kansas University (1929-1939) and (1946-1952), coached the Brooklyn Dodger professional football team from 1939 to 1942. Mike Getto managed the Eldridge Hotel from 1958 to 1970. He reports that his mother was born in the Eldridge Hotel and that his father died there.

In 1855, the New England Emigrant Aid Society of Massachusetts built the original hotel to accommodate new settlers arriving in Lawrence until their permanent houses were built. The structure contained three floors, including a basement, fifty guest rooms, outhouses, a flat roof for promenades, and stables for fifty horses with storage space for wagons. The Society instructed its agents, Charles Robinson and Samuel Pomeroy to complete construction as soon as possible. When lack of funds delayed the completion, Robinson and Pomeroy leased the hotel to Shalor W. Eldridge and his brothers Thomas, Edsin and James. They finished the construction and named it the Eldridge House.

Since the primary reason the town of Lawrence was founded was to settle the newly-designated Kansas territory with anti-slavery advocates, the city and the Free State became a symbol of defiance against the pro-slavery legislation and its supporters.

In early May 1856, a month after the hotel opened, the Douglas County Grand Jury recommended the removal of the Free State Hotel as well as Lawrence’s two newspapers, the Herald of Freedom and the Kansas Free-State, citing them as “nuisances.” The Sheriff of Douglas County, Samuel Jones, was sent to Lawrence to make several arrests and carry out the recommendations of the Grand Jury.

On May 21st, Sheriff Jones, and his posse, assembled outside the Free State Hotel and gave the Eldridges until 5 PM to leave before the building was destroyed. While the hotel was being vacated, a portion of the angry mob destroyed the offices of the town’s two newspapers and their printing equipment. Before the 5 PM deadline, several of Jones’s men began to ready the cannon placed in front of the hotel. Impatient, the men began to fire the cannon, but luckily, the Eldridge family had evacuated the building by then. When the cannon failed to produce the damage necessary, the men lit barrels of gun powder in the basement to implode the building. When that failed as well, they took printing paper from the recently destroyed newspapers and set the hotel on fire.

The fight over the slavery issue was still ongoing in Kansas and the surrounding area. Across the border in Missouri, William Clark Quantrill began to gather a group of border ruffians to steal land from Kansas Jayhawkers, anti-slavery guerilla fighters who were also raiding Missouri lands. As the border ruffians increased in numbers, they raided larger towns and caused more devastation along the Kansas border.

By 1863, almost ten years after Sheriff Jones’s attack, residents of Lawrence had begun to feel secure in their daily lives since rumors of further raids turned out to be untrue until Quantrill and his men who had been traveling through Kansas disguised as Union troops. On August 21st, 1863, when they reached Lawrence during the pre-dawn hours Quantrill gave the order to kill only the men, leaving the women and children unharmed. Upon entering town, they stationed themselves outside the Eldridge House where the Provost Marshal of Kansas, Alexander R. Banks, displayed a white sheet outside his window, declaring sanctuary for those inside the hotel. Hotel guests were removed and escorted across the Kansas River to the City Hotel while Quantrill’s men burned the hotel to its foundation. In keeping with the Provost’s request, Quantrill ordered that the guests at the City Hotel be left unharmed, adding that the proprietor at the City Hotel had previously shown him great hospitality. After Quantrill left, several drunk and disgruntled boarder ruffians returned to the City Hotel, ordered the inhabitants outside, and opened fire. Only one man survived by playing dead.

Once again, Shalor Eldridge decided to rebuild, using money collected from Lawrence residents and a city bond totaling $17,000. Having only completed the first floor when the funds were depleted Eldridge sold the hotel to George W. Deitzler, who completed the construction in 1866 and retained the name Eldridge House. The first floor was used as space for business rentals, while the hotel occupied the second and third floors, which contained sixty-four rooms, space for domestic help, and a dining room.

Under this new ownership, the Eldridge House was successful for a time, but between 1876 and 1915 the hotel changed hands multiple times. The newly-named Eldridge Hotel ultimately fell into disrepair prompting the residents of Lawrence to call for a restoration. By 1925, the Lawrence Chamber of Commerce initiated a fund of $50,000, resulting in destruction of the old hotel and the building of a new structure in its place. Experiencing many delays, the hotel opened to a grand reception in 1929 after four years of construction. The Lawrence Journal-World reported that the hotel was ornamented with ivory and gold, the coffee shop in jade and green, and the grill room embellished with tinted bricks. Pennants from the “Big Six” athletic teams were inlaid on the tile floor.

Billy Hutson was one in a million with a distinct personality that influenced the growth of the community and which won him countless friends all over America. He was the old-fashioned hotel-keeper, the genial host, the funmaker and the sagacious businessman who succeeded where countless others failed….

The popular Hutson, who died Sunday evening, perhaps had as many first-name acquaintances among his colleagues as any man who has ever lived in Lawrence…

Mr. Hutson was respected as a businessman because he knew how to make the business pay. In the depression of the 30’s when 50 percent of the public-held hotels went into bankruptcy- the Lawrence man became a doctor for many faltering hotel organizations….

The Eldridge Hotel, a Lawrence landmark, will continue under family management, thanks to Mr. Hutson’s foresight. His grandson, young Mike Getto, came back from military service a year ago to become the active manager and already his progressive attitude is reflected in management of the business.”

During the 1960s, when interstate highways made traveling easier, less expensive and easily accessible, motels became popular. The Eldridge Hotel, like many other downtown hotels across the country, was forced to close its doors. Afterwards, the structure was remodeled for apartments. In 1985, citizens of Lawrence raised funds totaling three million dollars to rebuild the Eldridge Hotel. The new hotel has five floors and features forty-eight two-room suites. The hotel was renovated again in early 2005, after it was sold at auction to a group of University of Kansas alumni and local investors. Upon reopening in early 2005, the new owners restored the glory associated with the hotel in the 1920s.

The Lawrence population growth in 2014 is one of the reasons that the Eldridge Hotel owners have decided to implement their expansion plans. The lot next to the Eldridge has been vacant since 1973 and is owned by the hotel’s proprietors. The hotel currently has 48 guestrooms, banquet space and two restaurants. The expansion will add 54 new hotel rooms, an expanded restaurant and new banquet space. Local architect Paul Werner is designing the new project.

A motto adopted by the city after the Quantrill raid, “from ashes to immortality” fits the Eldridge Hotel today because of its history of being rebuilt multiple times, each time bigger and better than the last. The Eldridge Hotel continues to uphold the principles of tenacity, pride and hospitality. Standing on the site of the former Free State Hotel, the Eldridge Hotel still welcomes people to Lawrence, Kansas.