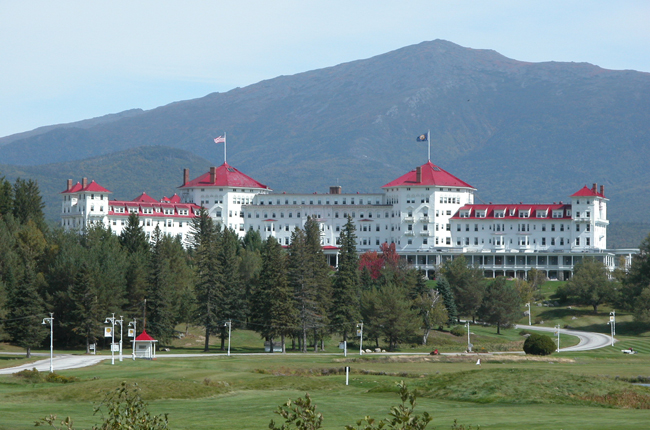 Ground-breaking for the new hotel was in 1900 and construction began in 1901. It was conceived and built by Joseph Stickney, a New York financier who owned the nearby Mt. Pleasant House. By the late 1890s, Stickney decided to build a more luxurious hotel opposite the Mt. Pleasant House. Two hundred fifty Italian craftsmen were brought in for the actual construction work. They lived in dormitories on the property, built for that purpose. Of the thirty grand resort hotels erected in the White Mountains between 1850 and 1930, only the Mount Washington Hotel was planned and built as a single entity from the start. It was designed by Charles Alling Gifford, who was recommended by Henry M. Flagler.

The hotel, designed to be open only for the summer and early fall, included the latest amenities. It had a railroad station and coaches to bring guests to the hotel from the station, it had a golf course designed by Donald Ross (which is still in use), it had an artificial lake, bridle paths, wagon roads, telegraph, running water, bathrooms, an elevator, modern refrigeration equipment, its own electric power plant (which is still intact), a plant for making illuminating gas should the electricity fail, a one-of-a-kind plant to print the daily menus and a daily newspaper for the guests. A large barn for horses and a garage for automobiles were added along with quarters for chauffeurs, dormitories for the staff (one for men and one for women), an orchestra, a choir, a heated indoor swimming pool and a billiard parlor. A doctor and two nurses were on duty on the premises.

Unfortunately, Joseph Stickney died one year later in December 1903. He left both hotels and other property to his much younger wife, Carolyn Foster Stickney. She ran both hotels until her death in November 1936. Carolyn left both hotels to her nephew, F. Foster Reynolds, who operated them through the Depression and well into World War II. He later sold the Mount Washington Hotel and the new owners had good fortune when the U.S. government requested the use of the facilities for the Bretton Woods Monetary Conference. This international conference was sponsored by the United Nations and 733 delegates from 44 nations attended. Its intent was to deal with international monetary and financial issues at the end of World War II. Substantial renovations were made to the hotel by the U.S. government.

In 1955, the hotel was sold to Mr. and Mrs. Morris J. Fleisher of Philadelphia, who operated the Hotel for fifteen seasons until its sale to 1969 to the Mount Washington Development Company. This company developed the popular Bretton Woods Ski Area and reacquired many out-parcels, thus consolidating the original Stickney Estate. Bretton Woods Corporation acquired the property in 1975. Under its ownership, The Mount Washington Hotel was listed in the National Register of Historic Places and 6,400 acres of beautiful woodlands were sold to the United States government for inclusion in the White Mountain National Forest.

In 1991, a new chapter in the hotel's history began as a group of New Hampshire businessmen joined forces to purchase surrounding property to ensure its place in the 21st century. Subsequent purchases of the Resort's two golf courses, surrounding development land and New Hampshire's largest ski area at Bretton Woods, successfully reunited all original Resort properties.

At Thanksgiving, 1999 the hotel opened for the Winter season for the first time. In January 2009 the Mount Washington Resort opened a 25,000 square-foot spa and a 25,000 square-foot conference center. Today, this renowned resort has recently completed a $60 million renovation and offers luxurious accommodations and countless activities including a full-service spa, New Hampshire's largest ski area, the original 18-hole Donald Ross-designed golf course, indoor and outdoor pools, riding carriage and sleigh rides, tennis and horseback riding. The Mount Washington Hotel is a member of Historic Hotels of America and the National Trust for Historic Preservation. It is operated by Omni Hotels & Resorts under the official name of Omni Mount Washington Resort. It was added to the National Register of Historic Places in 1978 and designated a National Historic Landmark in 1986 by the United States Department of the Interior.

*excerpted from “Built To Last: 100+ Year-Old Hotels East of the Mississippi” AuthorHouse 2013

Ian Schrager writes in the Foreword: “This particular book completes the trilogy of 182 hotel histories of classic properties of 50 rooms or more… I sincerely feel that every hotel school should own sets of these books and make them required reading for their students and employees.”