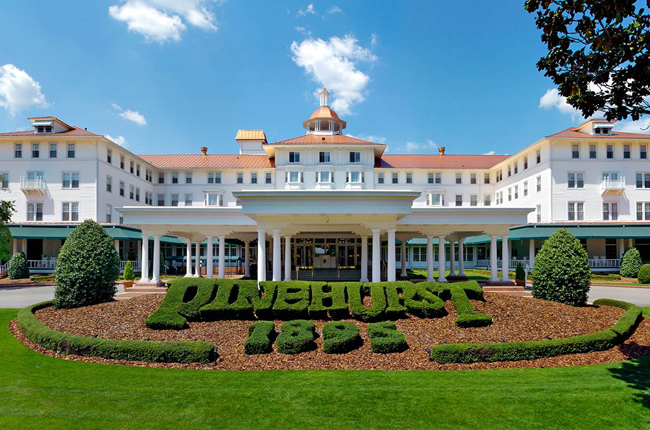 The history of Pinehurst began in 1895, when Bostonian James Walker Tufts, wealthy owner of the American Soda Fountain Company, purchased 5,800 acres of ravaged timberland in the sand- hills of central North Carolina. This land once held a flourishing pine forest that had been cut and deforested for its turpentine and building supplies. Tufts originally developed Pinehurst as a health resort for patients recovering from tuberculosis. After much of the construction had been completed, Tufts learned that tuberculosis was contagious and was forced to turn his new community into a leisure resort instead.

Tufts hired the land planning firm headed by Frederick Law Olmsted, designer of Central Park and Prospect Park in New York and the Biltmore Estate in Asheville, North Carolina. By the end of 1895, Tufts had completed a general store, dairy, boarding house, more than 20 cottages and the Holly Inn. The Pinehurst Hotel opened in 1901 and became the center of such activities as riding, hunting, polo, lawn bowling, archery, bicycling and tennis.

Over the years, many other sports have hosted championships at Pinehurst including the U.S. Tennis Clay Court Championships, the U.S. Croquet Championship and the World Lawnbowling Championship. Today, Pinehurst is a quintessential resort encompassing three historic hotels, a wealth of recreational activities, and 2,000 beautiful North Carolina acres. Set in one of America's only National Landmark Districts, Pinehurst's wide verandas, walking trails and bucolic pathways wind through a scenic New England-style village.

In 2002, the new Spa at Pinehurst was one of the first spas in the South to receive the Mobil Four-Star spa designation.

The Pinehurst Resort is a Four-Star, Four-Diamond full-service property that includes valet parking, bell staff, concierge, business center and meeting facilities. It is a member of Historic Hotels of America, the official program of the National Trust for Historic Preservation.

"Nostalgia for the city's caravansaries will be kindled by Stanley Turkel's

The fact-filled book by Mr. Turkel, an industry consultant, explains, among other things, the history of the hyphen (recently excised) in the name of the Waldorf Astoria, which inspired a mid-block street and even a song."

Attorneys Take Note: For the past twenty-four years I have served as an expert witness in more than 40 hotel-related cases.