Nobody Asked Me, But… No. 175: Hotel History: William Cornelius Van Horne; My Five Published Hotel Books

Nobody Asked Me, But… No. 175: Hotel History: William Cornelius Van Horne; My Five Published Hotel Books 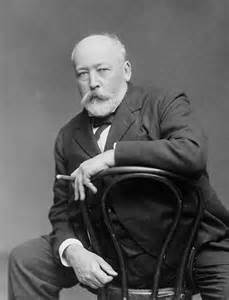 William Cornelius Van Horne was born on February 3, 1843 on a farm in Will County, Illinois. His great grandfather, Jan Cornelissen Van Horne had emigrated from the Dutch Republic in 1635 to the British colonies and settled in New Amsterdam, now known as the Island of Manhattan. The family prospered and became landowners and businessmen who played an important role in the industrial and political development of New York State.

William Van Horne’s father, Cornelius Covenhoven Van Horne, was trained as a lawyer at Union College. He is said to have “chafed at the dullness of life in that profession”, and cast it all aside to go west in 1832 with his wife and two children, seeking his fortune. But, life in the west was hard. His first wife and two children died in a fire that destroyed his home, barn, and law books. Cornelius Van Horne married for a second time to Mary Minier Richards in 1842 (William’s mother), and borrowed money from his brother to buy another farm. Mary Minier Richards was the daughter of a South German father and a Pennsylvania mother of French descent. William was the eldest of five children.

In 1854, tragedy struck the Van Horne family again when William’s father died from cholera. William Van Horne was eleven at the time. He was able to help support the family when he started his first job at age 14 to work as a telegrapher with the Illinois Central Railway in the company’s Chicago office. Thus began his career as one of the greatest railway men ever known.

Between 1858 and 1864, he served in various capacities for the Michigan Central Railway. He joined the Chicago & Alton Railway in 1864 and within eight years had worked his way from ticket agent to train dispatcher, then Superintendent of Telegraphs and finally to Division Superintendent. Subsequently, he showed a remarkable aptitude for rebuilding faltering American railroad lines into paying propositions; his consolidation of the Milwaukee Road (1879) being the most notable example.

In 1864, Van Horne commenced a new position as train dispatcher in Bloomington, Illinois and met his future wife, Lucy Adaline Hurd. She was the daughter of an Illinois civil engineer involved in railroad construction and was well educated with a degree from Lombard College in Galesburg, Illinois. The couple were married in March 1867 and had three children: Adaline (born 1868), William (born 1871, died at age five), and Richard Benedict (1877), known as “Bennie”.

One year after his marriage, William Van Horne achieved one of his greatest aspirations, to become general superintendent of the Illinois Central Railway, and to have his own private car on the line. At the time of this achievement, he was only 29 years of age and the youngest railroad head in the world. Another great opportunity unfolded in the fall of 1881, when Van Horne was asked if he would become general manager of the Canadian Pacific Railway (CPR). At that time Van Horne was the superintendent for the Chicago, Milwaukee, and St. Paul Railways.

He was an executive to be reckoned with. He used his remarkable skills to motivate his workers and always found a way to get any necessary supplies needed to finish the railway. He attracted 12,000 workers to build track across the rocky Canadian Shield by offering them a salary of two dollars for a 15-hour work day. Since some of this land was known as “200 miles of engineering impossibilities,” Horne was able to motivate the construction employees to prove this wrong. He would often show up at work sites on a flat car or wagon in order to encourage the workers.

With Horne’s savvy and motivation, the railway was completed on November 7, 1885 ahead of schedule with money left over. The first passenger train left Montreal for Port Moody, British Columbia on June 28, 1886. In 1888, William Van Horne was named President of the Canadian Pacific Railway and in 1898, he became Chairman of the Board. In 1894, he was awarded a knighthood for his remarkable achievements.

Five years after the last spike was driven, Sir William Van Horne visited New Brunswick to inspect the province’s railway system and to arrange for its lease to the Canadian Pacific. In his travels he came upon St. Andrews and fell in love with the exquisite beauty of Passamaquoddy Bay with its protected islands. The Van Hornes purchased the southern tip of Minister’s Island in 1892, and there, for the next 25 years, Sir William worked at creating a self-sufficient summer haven.

During the construction of the railway, Van Horne realized that he could bring tourists into Canada using the railway. With that in mind, he ordered the construction of several resorts along the railway where people come to enjoy the scenery, the hunting, and the fishing. Noted for his famous quote, “If you can’t export the scenery, we’ll import the tourists”, Van Horne built Mount Stephen House high in the wilds of the Canadian Rocky Mountains, and began welcoming guests to this first-ever Canadian Pacific Hotels property in 1886.

With the Canadian government’s blessing, Van Horne and his successors built the following world-class resort hotels and lodges:

After the Spanish-American War, Van Horne became one of the chief promoters of railway and industrial enterprise in Cuba. In May 1894, he was knighted by Queen Victoria in acknowledgement of his distinguished public service.

Van Horne was flamboyant, outspoken and multi-talented. His appetites were legendary as was his sophistication. He had a passion for art and he dabbled in architecture. Incredibly, while the CPR’s contract with the government dictated completion of the road within a decade, Van Horne – through sheer determination and talent – found ways to finish it in five years. Even more remarkably, once Van Horne had completed the CPR, he operated it and, despite the economic malaise for most of the 1880s and 1890s, made it into a paying proposition. Surely, the Canadian Pacific’s role as an instrument of Canadian nationalism would have followed a different course, had the American Van Horne not been at the helm.

On September 11, 1915, Sir William Cornelius Van Horne died at 72 years of age at his home in Montreal. He was buried in his hometown of Joliet, Illinois.

"Nostalgia for the city's caravansaries will be kindled by Stanley Turkel's Hotel Mavens: Lucius M. Boomer, George C. Boldt and Oscar of the Waldorf". The fact-filled book by Mr. Turkel, an industry consultant, explains, among other things, the history of the hyphen (recently excised) in the name of the Waldorf Astoria, which inspired a mid-block street and even a song."

Stanley Turkel was designated as the 2015 and the 2014 Historian of the Year by Historic Hotels of America, the official program of the National Trust for Historic Preservation. This award is presented to an individual for making a unique contribution in the research and presentation of hotel history and whose work has encouraged a wide discussion and a greater understanding and enthusiasm for American History.

The author, Stanley Turkel is a great story teller…. This book is about risk takers, dreamers, inventors, entrepreneurs, innovators, visionaries, leaders and motivators. This is a collection of stories about hotel pioneers with a passion for inventing new ways to create demand for their product.”