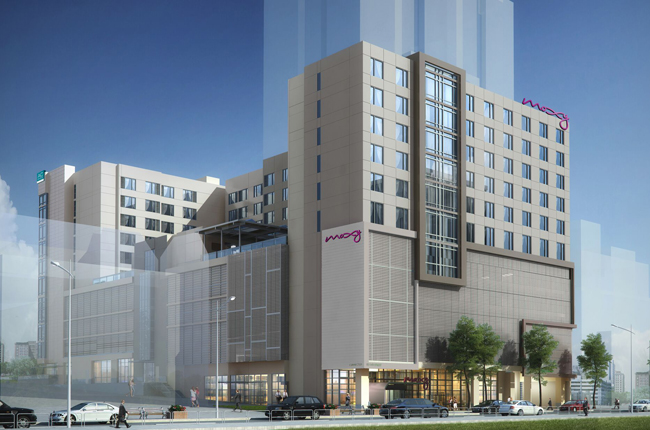 Development will be the first dual-brand lifestyle hotel in Georgia

Atlanta, GA (March 21, 2017) – Marriott International (NASDAQ: MAR) and Noble Investment Group (“Noble”) today celebrated the groundbreaking of what will be Marriott’s first-ever combination of an AC and Moxy under one roof. The $70 million, five-story hotel project will rise on a full city block in Midtown Atlanta, one of America’s most dynamic business districts and a regional epicenter for music and arts. The hotel is expected to open in the middle of 2018.

“Midtown Atlanta is the perfect place to debut this visionary, two-in-one lifestyle hotel, which will become a go-to destination for both business and leisure travelers,” said Tony Capuano, Marriott’s Executive Vice President and Global Chief Development Officer. “We’re thrilled to be working with our great partners at Noble to launch these exciting brands in dynamic markets throughout North America.”

Both hotels will have distinct hospitality experiences inside and will share a deck-top amenity level that will contain shared meeting space with outdoor break-out space, health and fitness and a rooftop pool and bar with outdoor fire pits.

As part of this project, Noble will also help establish the missing link in an extensive pedestrian connector. To be called the Arts Walk, the ground-level path will provide direct access for hotel guests and local residents to walk from 14th Street to the lively Crescent Avenue entertainment and dining district, to the more than 20 million square feet of corporate office and the world-renowned Woodruff Arts Center along 15th Street. The connector will eventually stretch from the Woodruff Arts Center to high-speed public transportation at the 10th Street MARTA station.

“We are proud to continue to expand upon our more than 20-year partnership with Marriott with our development of the first, dual-branded AC Hotel and Moxy Hotel in the world,” said Mit Shah, Noble CEO. “Midtown Atlanta has become one of the best live, work, learn, stay, shop and play communities in the United States and we are excited to bring these iconic new lifestyle brands to our hometown."

Midtown Atlanta is home to more than 24,000 students who attend Georgia Tech University, Savannah College of Arts and Design and Emory University Hospital. Midtown Atlanta attracts over 6.1 million tourists annually primarily driven by its arts and entertainment offerings and is home to 16 percent of the total jobs in Atlanta, 25 percent of the city’s professional jobs and a fast-growing residential population that is 75 percent Gen X and Millennials.

Atlanta is ranked among U.S. News and World Report’s 2017 Best Places to Live, noting the Georgia capital is among the nation’s fastest-growing cities. NerdWallet ranked Atlanta No. 6 on a list of the Best Cities for Job Seekers in 2017.

About AC Hotels by Marriott

AC Hotels by Marriott®, a lifestyle brand that celebrates a new way to hotel complemented by a European soul and Spanish roots, boasts more than 90 design-led hotels in Brazil, Denmark, Italy, France, Mexico, Portugal, Spain, Turkey, and the United States. Design-driven AC Hotels edit away the unnecessary to remove friction, providing thoughtfully designed moments of beauty, allowing guests to focus on what’s important to them. The properties modern design for modern business include buzzing AC Lounges, the perfect place for locals or visitors to get work done in style or to enjoy handcrafted cocktails and tapas.  High-design guest rooms and public spaces with sleek furnishings and intuitive technology features such as the Media Salons and AC Libraries inspire and connect. AC Hotels by Marriott® is proud to participate in the industry’s award-winning loyalty program, Marriott Rewards® which includes The Ritz-Carlton Rewards®. Members can now link accounts with Starwood Preferred Guest® at members.marriott.com for instant elite status matching and unlimited points transfer. For more information, visit ac-hotels.com. For more information, visit http://achotels.marriott.com and follow us on Facebook, Twitter, and Instagram.

Moxy Hotels is Marriott International’s new millennial-focused brand that debuted in September 2014 with the opening of the Moxy Milan. A boutique-hotel concept for the next-Gen traveler, Moxy is a fresh and innovative brand combining stylish design and approachable service at an affordable price point. With tech-enabled rooms, vibrant lobby spaces and warm, modern service, Moxy aims to surprise travelers with a thoughtful, spirited and fun guest experience. To learn more about Moxy Hotels, visit www.MoxyHotels.com.

Since 1993, Noble has specialized in making value-added, opportunistic and income investments in upscale select service and extended-stay hotels affiliated with Marriott, Hyatt, Hilton and Intercontinental. Through its private equity real estate funds, Noble has invested more than $3 billion in communities throughout the United States, creating thousands of jobs. As a fiduciary to state pensions, university endowments and foundations, Noble’s endeavors help to preserve and grow our limited partners’ capital which provides retirement benefits for millions of our country’s teachers, policemen and firefighters as well as financial resources for students to attend college. For more information, please visit nobleinvestment.com.