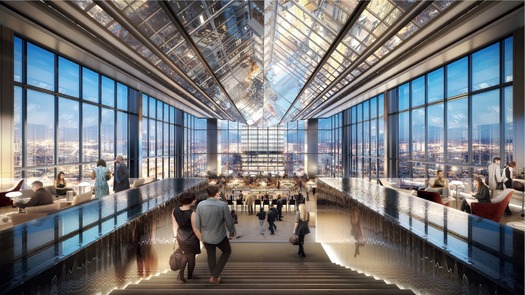 PHILADELPHIA, June 27, 2018 – Big-name hotels are opening new properties in Philadelphia—Cambria, W, Element—while just-in-Philly properties are strengthening the city’s boutique cred. Altogether, the nine new hotels are unlocking 1,902 new rooms to meet visitor demand, which has increased at a rate of 86% over the past 20 years.

So, what’s coming? A sky-high Four Seasons, a dual-hotel complex housing a W and an Element, an extended-stay property (ROOST Apartment Hotel) and an “invisible service” model (Lokal Fishtown), plus several major renovations.

Here’s a look at Philadelphia’s new, soon-to-come and revamped hotels:

Cambria Hotel Philadelphia Downtown Center City – Along the Avenue of the Arts, this 15-story addition to the hotel scene features a ground-floor restaurant, rooftop lounge, fitness center and pool. cambriaphiladelphia.com

Lokal Fishtown – Following the formula it established in the Old City neighborhood, the Fishtown outpost of this boutique hotel promises an “invisible service” model. Guests can count on highly customized concierge guidance without a front desk and other typical hotel amenities. The apartment-style one- and two-bedroom units invite visitors to live like locals. staylokal.com

Four Seasons Hotel Philadelphia – The 60-story Comcast Technology Center—the tallest building in Philadelphia—will open in late fall with a luxury occupant: the Four Seasons. Guests arrive to the hotel’s sky lobby on the top floor, and then they can ease into their stay with a trip to the spa, fitness facility and infinity pool on the 57th floor. Restaurants helmed by award-winning chefs Jean-George Vongerichten and Greg Vernick will draw both local and visiting food lovers. fourseasons.com

MainStay Suites/Ascend Hotel Collection – Locally inspired artwork will bring the city inside the hotel, and guests who still want a workout after traversing the walkable downtown can pop into the fitness center. choicehotels.com/mainstay

W Philadelphia and Element Philadelphia – It took a full 24 hours to pour the concrete for each floor of this 52-story, dual-hotel complex. Each floor looks a little different than any of the others. hotel-development.marriott.com

Pod Philly – The micro-hotel pioneer arrives in town via this efficient, modern, 11-story building just two blocks from Rittenhouse Square. There will be a coffee bar by Greg Root and Nick Kennedy of Root and a rooftop greenhouse bar with a retractable roof of its own. thepodhotel.com

Hyatt Place Philadelphia Airport – Hyatt is expanding the footprint of its popular select-service brand with the opening of a Hyatt Place near Philadelphia International Airport. hyattplace.com

Renaissance Philadelphia Downtown Hotel – Once The Franklin Hotel, this 13-floor property underwent a multi-million-dollar renovation and a rebranding. The common spaces and 152 guestrooms now sport a contemporary, urban design—think black-white-and-wood spaces with gold accents and local art—and the new bar and restaurant add a lively, welcoming vibe to the ground level. marriott.com/phlpr

The Rittenhouse – When completed, the current upgrades will mark the last phase in a complete renovation that has transformed the 118-room hotel over the last five years. This piece of the overhaul, which accounts for $10 million of the $20 million total, will take guestrooms from elegant to divine. rittenhousehotel.com

Courtyard Philadelphia Downtown/Autograph – A $23 million revamp will transform the 499-room Courtyard into The Notary, an Autograph Collection hotel. Guests of the property will enjoy an upscale experience. marriott.com/phldc

Sheraton Society Hill – With new owners at the helm, this hotel will get a new, to-be-announced name and a reimagined environment. The public and guest spaces—lobby, restaurant, rooms, indoor pool and event spaces—will welcome visitors to Historic Philadelphia. sheratonphiladelphiasocietyhill.com

VISIT PHILADELPHIA® is our name and our mission. As the region’s official tourism marketing agency, we build Greater Philadelphia’s image, drive visitation and boost the economy.