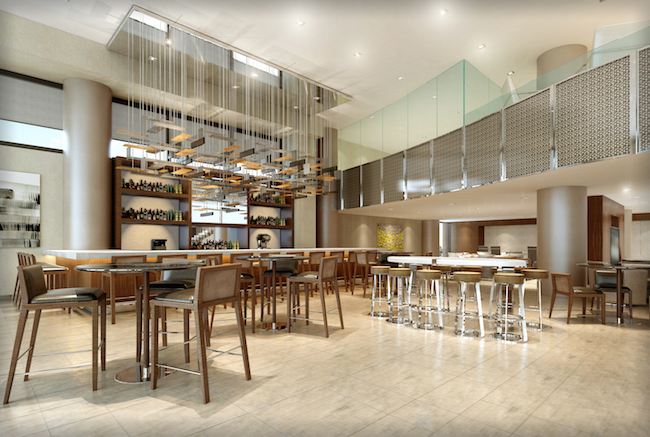 “We have dramatically renovated and given vibrant new life to the historic Mercantile Commerce Building, which originally opened in 1956 and has been vacant for 25 years,” explained Mehul Patel, Chairman of NewcrestImage. “By moving from retired to relevant, this building will add significant momentum to the revitalization of downtown Dallas.”

Each hotel is highlighted by distinctive, customized interior design and furnishings that appeal to its specialized market segment – select service for AC and extended stay for Residence.

The AC Hotel, for example, is inspired by clean, modern European style such as guest rooms with “floating” furniture and public space with terrazzo floors, travertine walls, and commissioned artwork from around the world.

In contrast, the Residence Inn brings together international flair with southern charm, and spotlights various Dallas signature landmarks. For example, décor elements include headboards that mimic the stitching in cowboy boots; lighting fixtures that depict the city skyline; and a commissioned art collection that was created by local artists.

A 10-floor parking garage, which is scheduled to open in 2018 behind the building, will include an indoor swimming pool to serve the two new hotels as well as NewcrestImage’s Hampton Inn & Suites located immediately adjacent.

The 176-room Hampton opened in July of 2016 as adaptive reuse of the 18-floor former Allen Building, which was built in 1923. That hotel became the largest Hampton in Dallas and the first Hampton in downtown Dallas in more than 12 years.

NewcrestImage has a history of “first’s” with its projects. For example, in November of 2014, the company opened the first AC Hotel in North America with renovation of the former New Orleans Cotton Exchange into a 220-room property in that city’s French Quarter.

In December of 2013, NewcrestImage opened the first dual-branded hotel in the Dallas-Fort Worth metroplex with a property featuring two Marriott brands – a 181-room Courtyard and a 120-suite TownePlace Suites – in Grapevine, about two miles from DFW International Airport.

NewcrestImage, based in the Dallas suburb of Lewisville, currently owns and operates a portfolio of 23 hotels, with another 10 properties under construction or in development, including historic sites in Cincinnati, New Orleans, and Houston. The company has three divisions: real estate, construction, and hotel management.

Currently, Dallas-based NewcrestImage owns and operates a portfolio of 23 hotels, with another 10 properties under construction or in development, including historic sites in Dallas, Cincinnati, New Orleans, and Houston.  The company has three divisions: real estate development; construction; and hotel management.