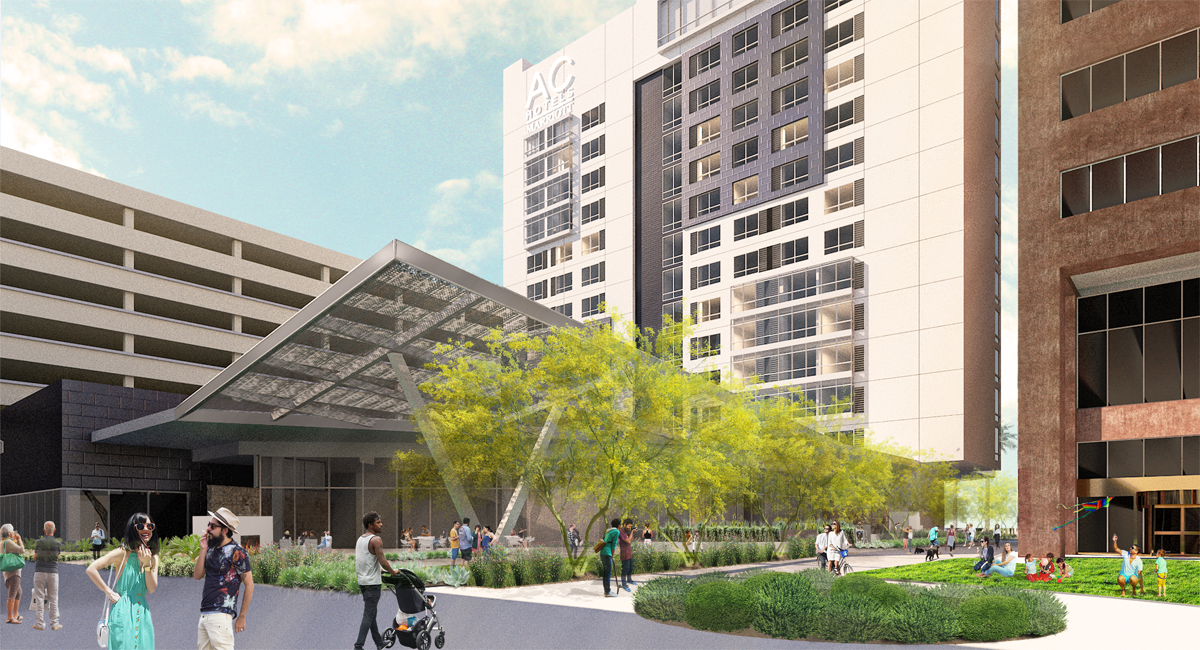 Dallas-based NewcrestImage broke ground today for its first hotel in the western United States – a 199-room, 13- floor AC Hotel by Marriott in the heart of downtown Phoenix that is a joint venture with Las Vegas-based LaPour Partners.

The hotel, scheduled to open in early 2021, is located at Arizona Center, a million-square-foot mixed use site that features shopping, entertainment, dining, and prime office space.

“This property is a powerful new crown jewel for downtown Phoenix, and it is an important step in expanding our company’s leadership nationwide, beyond our traditional home in the south and southwest,” said Mehul Patel, Chairman and CEO of NewcrestImage.

The AC Hotel will feature 3,400 sq. ft. of meeting space, including two media salons and a board room. The lounge and lobby bar will feature signature cocktails, tapas, and an outdoor patio with a distinctive water feature plus cozy fireplaces. Other amenities will be a fitness center, a library, and a business center.

Collaborating with NewcrestImage and LaPour Partners on the project are Phoenix-based Layton Construction as contractor; Axis GFA Architecture & Design in Los Angeles as architects; and DESIGN Duncan Miller Ullman in Dallas as interior designers.

In late July, NewcrestImage opened two new AC Hotels – a 195-room, 10-floor property in downtown Houston that is a unique historic renovation, and a 150-room, 8-floor property at Frisco Station in north Dallas that is part of an ambitious 600-room, four-brand hotel campus.

Currently, NewcrestImage operates in 10 states with 28 distinctive owned and managed hotels plus 15 other properties under construction or in development.

Currently, NewcrestImage owns and operates 28 distinctive hotels in three states – Texas, Oklahoma, and Louisiana.  It has another 15 properties under construction or in development, including projects in Arizona, Ohio, and Oregon.  The company has earned a reputation for ingenuity, for example, by developing large hotel campuses that feature multiple hotel properties immediately adjacent to each other, such as the four-hotel, 900 room development in Frisco; a three-hotel, 300-room development in Amarillo, Texas; and a six-hotel development in Grapevine, Texas.

In addition, NewcrestImage has repeatedly won industry awards and accolades for its creative make-over of historic locations into prestigious, one-of-a-kind hotels -- such as for its AC-Residence Inn dual-brand property in downtown Dallas; its SpringHill Suites and TownePlace Suites dual-brand in New Orleans; and its Courtyard by Marriott in downtown Amarillo. For more information, please visit www.newcrestimage.com.