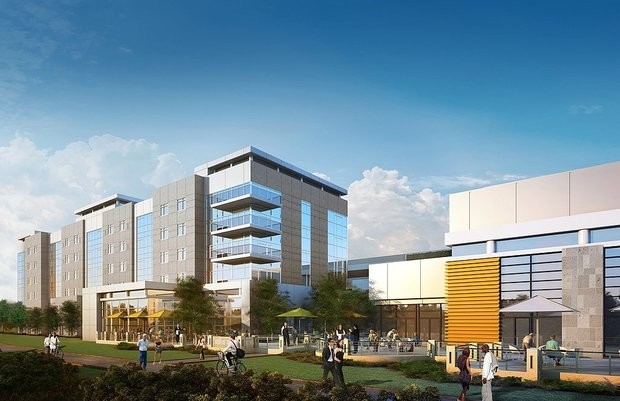 The Landing’s opening festivities included a performance by ultra-magician and illusionist, Steve Wyrick, who, for his finale, made a full-size helicopter appear from thin air in a spectacular “landing” for the official launch.

“We wanted the grand opening of The Landing Hotel to be amazing and unlike anything Schenectady has ever seen to let our guests know that when they come to Rivers Casino and The Landing Hotel, they can expect unparalleled entertainment and a world-class experience,” said Rivers Casino & Resort General Manager, Mary Cheeks. “Having Vegas headliner Steve Wyrick perform his magical ‘landing’ of a helicopter on our stage was the perfect way to launch this hotel and its ‘showstopping’ features.”

“Our entire team is energized and excited to welcome and serve guests and provide them with the first-class experience The Landing Hotel has promised to deliver,” said The Landing Hotel General Manager, Ryan Cimei. “The events leading up to the grand opening have built a tremendous amount of momentum, rooms have been booking up, and it’s fantastic to celebrate this special moment that so many people have been working so hard to make a reality.”

Ron Baumann, COO of Rush Street Gaming, parent company for Rivers and The Landing Hotel, noted that Schenectady is a perfect fit for Rush Street’s philosophy of being a catalyst in urban areas and contributing to the transformation of a region. He said, “Rivers Casino & Resort Schenectady and The Landing Hotel are now an integral part of the renaissance of Schenectady and its future as an entertainment destination in the Capital Region. The jawdropping entertainment visitors experienced at the grand opening of The Landing Hotel is a great example of the type of unique experiences guests can expect from us.”

“Schenectady is coming to life with an exciting array of new developments. The opening of the Capital Region’s only full-service casino, and now, The Landing Hotel, an upscale boutique property, will greatly contribute the growing reputation of Schenectady as an entertainment destination,” said David Buicko, President and CEO of the Galesi Group. “The Galesi Group’s development of Mohawk Harbor is one of the most dynamic development projects in New York State, and an extraordinary commitment to turn around one of America’s oldest industrial brownfields. Mohawk Harbor is a 60-acre waterfront community that integrates luxury living, retail, restaurants and commercial offices with our destination hotels and the Rivers Casino property.”

“Schenectady is being transformed each and every day and this project is as transformative as they come. We want to be a New York tourist destination and the opening of The Landing Hotel today signifies that we are on our way,” said Mayor of Schenectady, Gary McCarthy. “I am thrilled to see two major developments completed in the City within the past year and am excited to welcome millions of new visitors to the Electric City.”

The 165-room Landing Hotel is the final component of Rivers Casino & Resort Schenectady to come online, and was developed in partnership with Rotterdam-based The Galesi Group.

The Landing Hotel is just steps from the Capital Region’s only full-service casino, with a state-of-the art mix of 1,150 slot machines, 67 table games and a 16-table poker room. The hotel offers a state-of-the-art fitness center, chic lounge, outdoor patios and meeting space, as well as dining in the hotel lobby and bar area. Guests are able to order room service from any of the five restaurants at Rivers Casino & Resort, or book in-room treatments from Splash Spa.

Reservations and additional hotel information are available at: thelandinghotelny.com.

Rivers Casino & Resort Schenectady features a 50,000-square-foot gaming floor with 1,150 slot machines, 67 gaming tables and 16 poker tables. The floor is attached to a 10,000-square-foot Event Center capable of hosting more than 900 people for conventions and special events, one of the largest spaces in the region. Also on the property are five restaurants, Splash Spa and the 165-room The Landing Hotel. For more information on Rivers Casino & Resort, visit www.riverscasinoandresort.com.

About The Landing Hotel

The Landing Hotel is the upscale boutique destination the Capital Region has been eagerly anticipating. Situated on the picturesque Mohawk River in Schenectady, New York, with direct access to the Rivers Casino & Resort, The Landing Hotel is part entertainment hotspot and part waterfront sanctuary. Staffed by the region’s leading hospitality team, the 165-room hotel offers a state-of-the-art fitness center, chic lounge, outdoor patios and meeting space, as well as dining in the hotel lobby and bar area. Guests are able to order room service from any of the five restaurants at Rivers Casino & Resort, or book in-room treatments from Splash Spa.