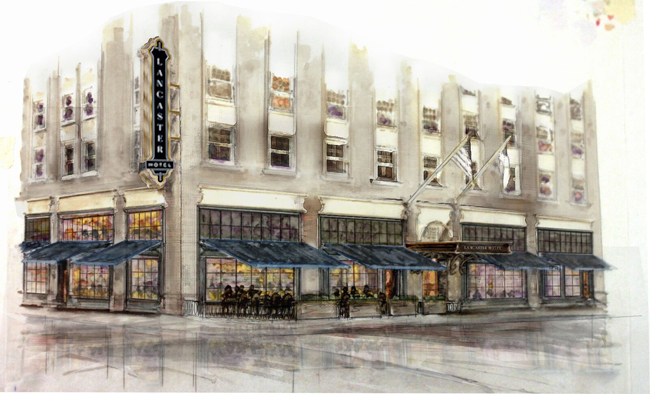 Houston, TX –The Lancaster Hotel has unveiled plans for the iconic hotel’s multi-million-dollar renovation, taking place under new owners, the Shinn family of Dallas. The redesigned hotel will place a new focus on the visual arts, complementing the property’s location in Houston’s vibrant theater and performing arts district, while acknowledging its legacy as a Texas Historic Landmark.

In July 2017, the group of second and third-generation hoteliers purchased The Lancaster Hotel from the Lusk family, longtime owners and descendants of the 1926 hotel’s owner, Michele DeGeorge. With initial plans to renovate the hotel over a two-year period, the Shinn family expedited the hotel’s redesign after it was damaged when Hurricane Harvey hit Houston in late August 2017.

As an artist, principal partner Jay Shinn envisioned the Theater District’s only hotel to be known as Houston’s “Art Hotel.” Public spaces and guest rooms will incorporate Shinn’s collection of more than 200 contemporary pieces by internationally recognized and respected Texas artists such as Mark Flood, Terrell James, Trenton Doyle Hancock, Aaron Parazette and Margo Sawyer. In addition, pieces by Donald Judd, Robert Rauschenberg and James Surls, among others, will be featured throughout the property.

“When our family purchased The Lancaster Hotel, we planned for it to serve as a true visual counterpart to its performing arts surroundings,” said Shinn. “Our family is thrilled to offer The Lancaster Hotel’s guests an improved and refined version of the hotel they’ve grown to know and love.”

Visionary interior designer David Cadwallader leads The Lancaster Hotel’s renovation, creating a timeless yet classic design. Cadwallader, with a background in luxury hotels, is best known for designing high-end residential spaces for some of the United States’ finest art collectors.

The overall design intent began by taking inspiration from the classic Regency style. Featuring clean, elegant lines with muted colors of white, grey, cream and taupe, the interior renovation will open much of the lobby and mezzanine spaces to increase light and improve the flow, creating a more modern living scenario.

Led by General Manager Tom Harwell, guests of The Lancaster Hotel can expect the same personalized, stellar service the hotel is known for, with added luxuries such as a cardio fitness room, Frettè bedding and towels, Bulgari bath amenities and complimentary shoe shine and garment pressing. To highlight the contemporary art displayed throughout the hotel, referred to as the “The Lancaster Collection,” each guest room will have information on the featured works.

In addition to the hotel’s interior renovation, the family has plans for a redesigned and renamed restaurant, debuting as Cultivated F+B. The restaurant is expected to open in conjunction with the hotel, featuring a reimagined menu executed under the leadership of Director of Food and Beverage, Allan Levine and Chef Fernando Huerta. New al fresco seating at the corner of Texas Avenue and Louisiana Street will create a café vibe, and will be complemented by a walk-in espresso bar, featuring Speedy Boy Coffee, with barista service for the hotel’s guests and downtowners alike. Speedy Boy Coffee, named for the winner of the 1927 “Pride of Houston” trophy presented by The Auditorium Hotel to the dog who outran fellow competitors at Galveston Greyhound Park, will feature special blends and artisan creations daily.

The Lancaster Hotel is slated to re-open this August. For inquiries or to make a reservation, visit thelancaster.com or call 713-228-9500. Follow the hotel’s progress on facebook.com/TheLancasterHotelHouston.

About The Lancaster Hotel

The Lancaster Hotel was first introduced to Houston as the Auditorium Hotel in 1926 by owner and developer Michele DeGeorge and was designed in an Italianate style by noted Houston architect Joseph Finger. Under the new ownership of Texas-based veteran hoteliers, Matthew Newton, Jay Shinn and their family, The Lancaster Hotel’s recent interior design refinement and renovation incorporates a curated collection of contemporary art by internationally recognized and respected Texas artists. The redesigned hotel places a new focus on the visual arts, complementing the property’s location in Houston’s prestigious theater and performing arts district, while acknowledging its legacy as a Texas Historic Landmark. For more information and to book reservations, visit thelancaster.com.