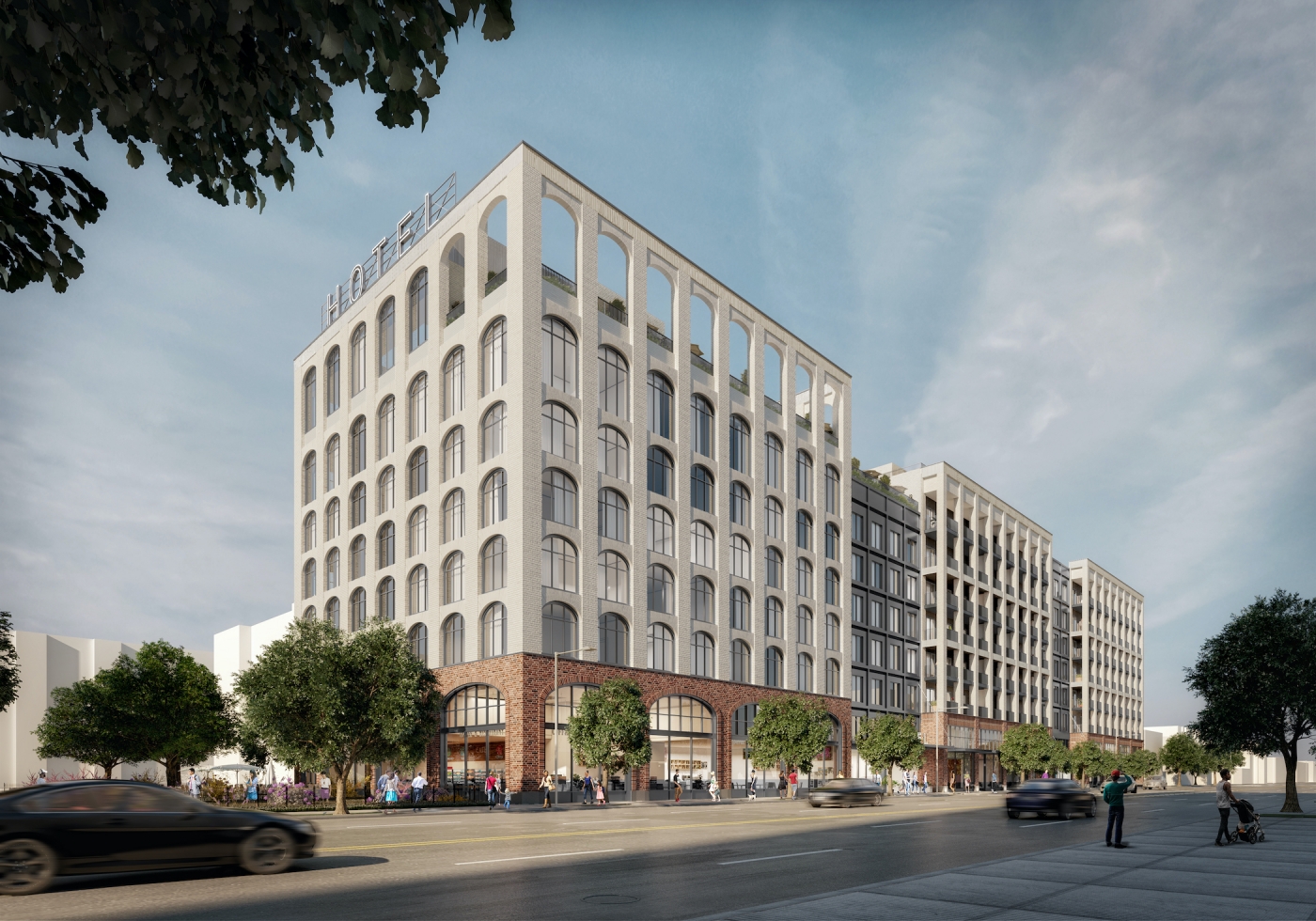 The transit-oriented development at 639 S. La Brea, which takes up nearly half a city block along the west side of La Brea, is immediately adjacent to Metro’s Wilshire/La Brea subway station now under construction.  The eight-story development is the result of nearly five years of planning and land assemblage by CGI+.  It will comprise three components; a 125 key hotel; 121 residential rental units; and 13,000 square feet of street-level and rooftop restaurant space.

639 La Brea will feature the only institutional-quality hotel with more than 100 rooms in the Miracle Mile/Mid-Wilshire neighborhood.  The boutique-style hotel, which is planned to accommodate both the leisure and business traveler will offer rooms ranging in size from 320 to 415 square feet, as well as two top-floor guest suites as large as 1,200 square feet.  Amenities will include a 3,500-square foot event space, a layered rooftop guest deck and swimming pool offering unobstructed views of Downtown Los Angeles, Hollywood Hills and Century City.

The residential portion will consist of 121 apartment homes consisting of one-, two- and three-bedroom floor plans with 18 units set aside for extremely low-income households and one for a moderate-income household. Each apartment home will feature hardwood floors, in-unit washer/dryer, home automation controls for security and climate, as well as one-touch access to neighborhood services.   Common area amenities will include a state-of-the-art fitness center, rooftop deck with interactive lounge spaces and pool and bicycle storage area. Given the immediate adjacency to the metro station, property residents will also receive Metro TAP cards and have access to onsite car and bike-sharing.

CGI+ engaged celebrated New York architecture and interior design firm Morris Adjmi to design the project, which will be its first in Los Angeles.   The architect is known for designing ground-up buildings that celebrate neighborhoods through its simplicity of design and historical context.   Adjmi’s noted projects include the Wythe Hotel in Brooklyn, The Standard at South Market in New Orleans, Il Palazzo in Fukuoka, Japan, The Edition Hotel and Residences in Tampa Bay, FL and Front & York, a one-million-square-foot residential building in Brooklyn’s Historic Dumbo District.

“639 La Brea will anchor a neighborhood that is really coming into its own,” said CGI+ Executive Vice President of Acquisitions and Development Andre Soroudi.   “Our goal has always been to create a project of scale, scope and design that fits appropriately into the community while becoming a focal point of activity for the neighborhood.  In addition to the excellent rooftop and ground floor on-site dining offerings, its location next to the Metro Station will offer easy connectivity to jobs and attractions in Downtown Los Angeles, Koreatown, Museum Row, Beverly Hills and the Westside, easing our residents and hotel guests’ reliance on automobiles,” added Soroudi.