MWSRC Plans Fall 2018 Opening for The Glen House at the Base of Mt. Washington

Home/MWSRC Plans Fall 2018 Opening for The Glen House at the Base of Mt. Washington

MWSRC Plans Fall 2018 Opening for The Glen House at the Base of Mt. Washington 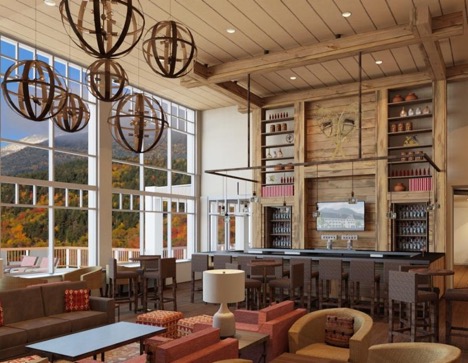 June 20, 2018. Green’s Grant, NH. The Glen House, the new 68-room hotel at the base of Mt. Washington, the highest summit in the Northeast, pays respect to the legendary White Mountain hotels of the 19th century in both its architecture and design. It is scheduled to open in Fall 2018.

The current hotel is the fifth iteration of The Glen House to be built near this site since the original hotel was erected in 1852. The new property is owned by the Mt. Washington Summit Road Company (MWSRC) and located near the base of the Mt. Washington Auto Road, which the family-owned MWSRC has operated since 1906.

“We looked at the backdrop of Mt. Washington, Mt. Madison and Mt. Jefferson and wanted the hotel to look like it had been there for 100 years,” says Rolf Biggers of BMA Architects & Planners of Amherst, New Hampshire, who designed the hotel and aimed to pay homage to the New England resorts of the 1850’s. “Then we looked at the architecture of the earlier versions of The Glen House and sought a common thread. Those hotels were all relatively simple, understated and very functional so we picked up on subtleties and nuances, such as the period detailing on the porches and the public spaces.”

BMA used clapboards and shakes on the exterior, albeit state-of-the-art HardiePlank Lap Siding and HardiePlank Shakes, made of fiber cement, with white trim in a style similar to its predecessors. The Glen House is a high-performance building envelope, close to energy self-sufficient and carbon neutral, thanks to a geo-thermal system that will provide heating and cooling as well as two offsite energy-generating projects harnessing hydro and solar power.

“It is simple and understated,” says Biggers. “The guestrooms have the simplicity of Shaker design. Half of them have views of Mt. Washington and sunset, while the others look towards neighboring Maine and the Wildcat Mountain Ski Area for sunrise views. The big bang when you enter the hotel is the glass wall in the lounge area, which frames the Presidential Range of the White Mountains.”

The interior design of the hotel drew upon the Shakers, the vintage woven baskets and artifacts of the local Abenaki Native Americans tribe and north woods culture.

“Shaker milk paint inspired the palette for the colors inside the hotel,” says Janet Harkins of Stibler Associates of Bedford, New Hampshire, a member of the design team for The Glen House. “In the guestrooms, you can see Shaker inspiration in the simple mill work and clean lines. As for the Abenaki influence, we used some of their weaving patterns in the flooring, the tile design and in the guestroom carpeting.”

The rustic north woods elements include a vintage barn on the property, dismantled and repurposed as part of the front desk and the bar. The motif of a barn door is used in every guestroom bathroom and the designers used rustic bronze as well as granite throughout, a fitting touch here in the Granite State.

Stibler Associates also oversaw the artwork, inspired in large part by the earlier hotels and the long history of auto racing up the Mt. Washington Auto Road. There is a 30-foot long sepia toned photographic mural of a Mt. Washington auto race in the lobby and a 30-foot long wall sculpture of the Presidential Range in the lounge that incorporates ropes and carabiners to identify points of interest in the area. Guestroom corridors will feature canvas-wrapped vintage photos of the previous iterations of The Glen House and the Auto Road. In the lounge, the traditional north country moose head over the fireplace is instead a brightly colored fabric rendition of a moose head.

The Glen House was designed and is being built primarily by New Hampshire firms, including contractors Martini Northern of Portsmouth and subcontractors Ray's Electric of Berlin, Granite State Plumbing and Heating of Weare, Yeaton Associates Inc. of Littleton and GB Carrier Corp of North Conway.

Located 30 minutes from North Conway, The Glen House is expected to open in mid-September 2018 and is currently accepting reservations.

About The Glen House

The Glen House is a new hotel at the base of Mt. Washington in New Hampshire’s White Mountains. The 68-room property will have a restaurant, bar and lounge, gym, indoor swimming pool and meeting space. A roster of outdoor activities is available through the adjacent Great Glen Trails Outdoor Center. The hotel is managed by Olympia Hotel Management (OHM), a division of The Olympia Companies, an innovative leader in high profile real estate development, equity investment and hospitality management projects in the U.S. For more information, visit www.The Glen House.