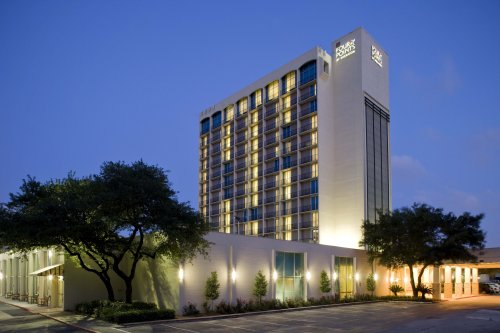 HOUSTON, TX – August 20, 2013 – Houston-based Midway, a privately owned, fully integrated real estate development and investment firm, has acquired the Four Points by Sheraton Houston West for an undisclosed sum. The 171-room, full-service hotel is located at 10655 Katy Freeway on the southeast corner of the Beltway 8 interchange.

Originally built in the early 1980s as the Sheraton Town & Country, the building is one of the last vestiges of the Town & Country Mall complex that was razed and redeveloped by Midway as CITYCENTRE. Construction on the award-winning mixed-use and pedestrian-oriented district began in 2007.

According to Jonathan Brinsden, CEO of Midway, “We’re understandably excited about this opportunity to expand the boundaries of CITYCENTRE to Interstate 10, while enhancing the community with an asset that broadens the district’s appeal as a destination for both business and pleasure.”

Valencia Group, which provides management, development, branding and repositioning services for independent, full-service hotels owned by the company, in addition to third parties, has been awarded management responsibilities for the Four Points by Sheraton Houston West.

The property, which encompasses traditional king and double rooms, as well as 81, two-room suites with separate parlor, was last renovated in 2007, when it was rebranded from Radisson Suites to Four Points by Sheraton Memorial City. Additional highlights include contemporary décor, on-site parking, a restaurant and lounge, outdoor pool, 2,800 square feet of state-of-the-art meeting and event space, a fitness facility, business center and sundries shop.

The purchase of the Four Points follows an announcement in June 2013 that Midway had acquired the former Luby’s site at 825 Town & Country Way, situated alongside CITYCENTRE’s northern gateway and just south of the Interstate 10 frontage road. That property will be redeveloped as CITYCENTRE FIVE, an eight-story, Class A office building with parking garage and 195,000 square feet of office plus ground floor restaurant/retail space. Groundbreaking is estimated to begin in fall 2013.