No idea is too small: Just ask the Stamford Marriott which hosted the 42nd annual American Crossword Puzzle Tournament – brainchild of the hotel’s first Director of Sales 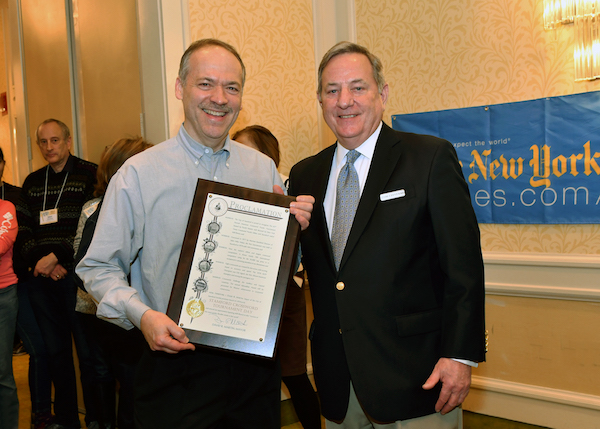 [Danbury, Conn., May 14, 2019] — In 1977, Mike Dolan, director of sales for the new Stamford (Conn.) Marriott Hotel, had an idea. To help increase business on a slow winter weekend, Dolan approached Will Shortz, then editing crossword puzzles for Penny Press magazines in Stamford, with the idea of hosting a crossword tournament. Shortz, who today is best known as the “Puzzlemaster” for NPR and crossword editor of The New York Times, jumped at the offer. The rest is history. Shortz recently hosted his 42nd annual American Crossword Puzzle Tournament (ACPT), still held at the Stamford Marriott Hotel & Spa. Not only did the event bring 1,000 visitors to downtown Stamford on what would have been a slow weekend, but it helped the hotel reach 100% occupancy on Friday and Saturday nights. The event has become such an economic driver for the City of Stamford that Mayor David Martin proclaimed March 24 to be Stamford Crossword Puzzle Day.

“The American Crossword Puzzle Tournament means a lot to the city of Stamford and to our hotel,” said Tom Civitano, director of sales and marketing for the Meyer Jabara Hotels managed property. “It gets widespread exposure for our city. Not only are there 1,000 participants, but the Tournament has been featured on 60 Minutes, Nightline, Today, CBS Sunday Morning, all three broadcast networks’ national newscasts, HBO’s Real Sports with Bryant Gumbel, and more. The 2006 documentary Wordplay, about Shortz and the ACPT, became one of the highest-grossing box office documentaries of all time. The event is also is an exceptional revenue driver for businesses Downtown. The Connecticut Convention & Sports Bureau anticipated that the ACPT would generate more than $610,000 in revenue for the Stamford area and $37,000 in Connecticut sales tax*. That’s what I could call a successful weekend.” 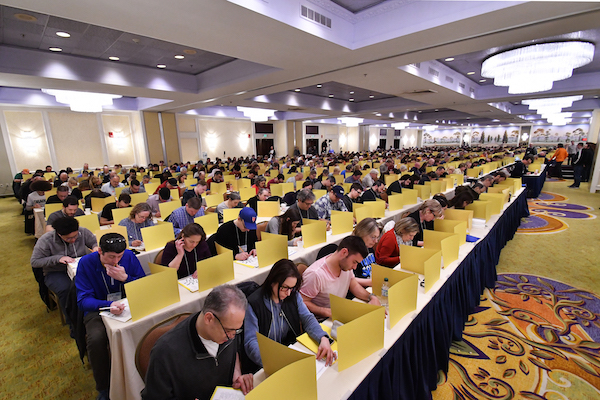 Shortz, a former resident of Stamford, said he plans to keep the annual tournament in Stamford as long as the hotel can accommodate it, because of the quality of the facility and the friendliness of the staff … and because the Marriott “feels like home.”

“I’m thrilled the tournament has become such a big success,” Shortz said. “Many puzzle solvers return year after year. Some tell me it’s literally the highlight of their year. It’s a reunion of some of the most quirky, flexible minds in the world.”

Encouraging Employees Pays Off The first ACPT was held in 1978, drew 149 contestants, and has grown tremendously over time. With each passing year the event stands as a reminder to Meyer Jabara Hotels that no employee contribution is too small.

“A company's culture is not a destination or a human resources program of the month, it is a journey,” said Justin Jabara, VP of business development and acquisitions for MJH. “It’s a collection of small actions and big strategies, the monumental decisions and the minute interactions that make up each day. At Meyer Jabara Hotels, we view each associate as a key stakeholder. We work just as hard to create engaged associates as they do to create returning, loyal guests. With unemployment at an all-time low, it’s more important than ever to encourage associates to be empowered. If they have an idea, we want to know about it. We’ll discuss it, research it, and if it has legs, we’ll put it into action.

“The American Crossword Puzzle Tournament is a great success story, and it’s an example that we share with our associates two-way communication,” Jabara said. “It’s proof that just one associate can have a tremendous bottom-line impact on the hotel, the community, and hundreds . . . if not thousands . . . of travelers visiting a destination. Striving to become a ‘Best Place to Work’ by encouraging associates to present ideas and then celebrating those who rise to new levels of engagement can possibly slow our industry’s extremely high turnover rate and maybe even stop employees from leaving one property and going to the next. Kudos to former Stamford Marriott employee Mike Dolan. Your contribution is still impacting our hotel today.”

Stamford’s Mayor Martin had this to say: “Stamford’s pen-and-paper crossword competition is a keystone event for our City, and we’re thrilled to continue hosting crossword enthusiasts in our great city,” he said. “The Marriott is an ideal venue for this competition and its thoughtful planning and management has led to the growth and popularity of this competition in the Stamford community. I thank them — and the organizers of this event — for bringing crossword enthusiasts from around the world to Stamford for so many decades, and I hope they continue this event for many more.”

With headquarters in Danbury, Conn., Meyer Jabara Hotels is an award-winning hospitality company owning, operating or leasing hotels and restaurants in 10 states throughout the eastern portion of the United States. The company was formed in 1977 as Motel Hotel Associates through the partnership of William Meyer, a specialist in real property law, and Richard Jabara, a second-generation hotelier. Their portfolio of hotels includes Marriott, Hilton, Sheraton, Crowne Plaza, Holiday Inn and Hyatt Place brands, as well as several independent hotels. The company culture, referred to as "The Journey," is considered by Meyer Jabara Hotels to be their strongest competitive advantage because it challenges and encourages each team to create special relationships, or heart connections, with the key stakeholders: business partners, associates and customers. For more information on Meyer Jabara Hotels, visit www.meyerjabarahotels.com.