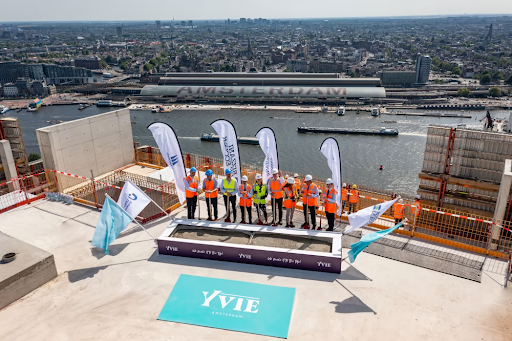 German Maritim Hotels group has signed a new 50-year lease with Union Investment for the biggest integrated congress hotel in Europe, being developed in Amsterdam North, close to the River Ij and opposite the city’s central railway station across the waterway.

The hotel, together with the Yvie residential tower being constructed alongside, represent a total investment commitment to the area development project of around €500 million by Union Investment. The agreement was announced at a ‘topping out’ ceremony in the Maritim Hotel tower on 15th of june by the well-known German family-owned hospitality group and Union Investment, one of Europe’s leading real estate investment managers

Dr Monika Gommolla, Chairman of the Supervisory Board and owner of the Maritim Hotels Group, said: “The Maritim Hotels Group is eagerly awaiting the opening in 2023 of our flagship property being developed by Union Investment in Amsterdam North. The European business convention market is gradually reviving after Covid and we fully expect it to recover to pre-pandemic levels in the near future, despite the darkening economic and geopolitical outlook, because people want to meet each other face-to-face again. The Maritim Congress Hotel will attract these visitors due to its state-of-the-art conference facilities and accommodation and easy accessibility. The location is only 20 minutes from the city’s Schiphol Airport and has excellent rail, road and boat connections. It is also just five minutes by ferry across the River Ij to Amsterdam’s beautiful 17th Century canal district. The Maritim hotel chain is known for its extensive conference facilities and highly professional events services for more than 50 years. Our long-term experience combined with this extraordinary location is a recipe for success.”

The exceptionally long 50-year lease compares with an European industry average of 20-25 years for similar investment assets and signals both parties’ confidence in the revival of the large conference format after the Covid pandemic and also Amsterdam’s high ranking as a location on the European business convention map. The Maritim Hotel is due to open its doors in 2023.

Volker Noack, Member of the Management Board at Union Investment said: “Union Investment stepped into this project in 2019 to acquire it from the previous investors because we were convinced that its stunning waterfront location, directly opposite Amsterdam’s central station across the River Ij, would be unbeatable for the largest integrated congress hotel in Europe and make it a top-ranking European convention destination. The Maritim Hotel, together with our Yvie residential tower being constructed alongside, places this stunning area development among the ‘Top Five’ investment commitments worldwide by Union Investment.”

The four-star hotel will offer 579 rooms in a 110-metre tower, the third highest in Amsterdam, and is combined with a conference and congress centre with the capacity to host over 4,400 people in 18 conference rooms, Haal 1 for up to 2,200 people, making it the second largest such venue in the city after the RAI exhibition and convention centre on the Dutch capital’s southern fringe. The integration of the hotel and convention space in the same building, also make this the largest venue of its type by room keys in the European convention market. The Maritim Hotel is twinned with the Yvie residential tower being built next to it and which will offer 176 permanent rental apartments and a further 120 available for extended stays.

Claudio de Eccher, President of Rizzani de Eccher, the Italian construction company, said: “The Yvie residential tower and Maritim Hotel together represent Rizzani de Eccher’s combined flagship and pilot project in the Netherlands, marking our entry into the Dutch market. Rizzani de Eccher has been involved with this project since late-2018 and we’re proud of the results achieved in the successful development of a new landmark for the city of Amsterdam and grateful to Union Investment for the trust placed in us.”

Amsterdam is internationally renowned for events in various industries and was ranked #14 worldwide in terms of association meetings and conventions held in 2019 by the International Congress and Convention Association. Citywide Hotel RevPAR (revenue per available room) in Amsterdam grew at a compound annual growth rate (CAGR) of 4.0% from 2015 to 2019, driven by a 3.0% CAGR average rate over the same period and a largely stable occupancy around the 80% mark, according to the HVS Hotel Valuation Index.

The city’s hotel market is regarded as one of the most attractive in Europe and recorded 9.8 million overnight stays in 2021, down from a peak of 16 million in 2018, due to the Covid-19 pandemic lockdowns and travel restrictions. Visitor numbers are now recovering steadily, although lagging behind the broader Dutch market, due to Amsterdam’s greater dependence on travellers from other parts of the world and business travellers, but overnight stays are projected to reach pre-pandemic levels by the end of 2023. 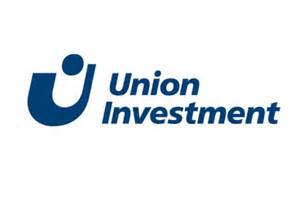